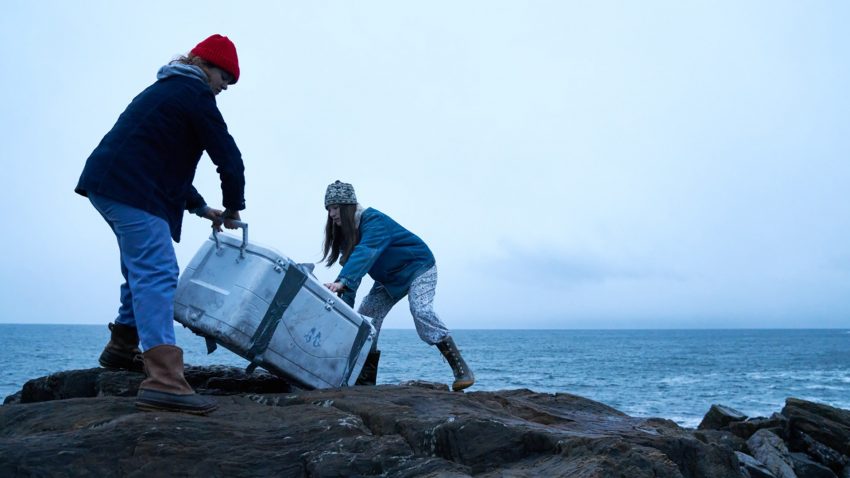 Thematically, murder ballads would better fit the fatal kind of trouble the Connolly Sisters find themselves in, but the sea shanties that punctuate this film better suit their coastal Maine fishing village. Priscilla is the reserved, responsible sister, but she gets caught up in Mary Beth’s chaos, out of sibling loyalty and guilt in Bridget Savage Cole & Danielle Krudy’s Blow the Man Down, which screens during the 2019 Tribeca Film Festival.

We are not kidding about the sea shanties, because David Coffin, “the singing fisherman,” not only kicks off the film with his performance of the titular song, he returns for periodic interludes. He and his background singing fisherman are not exactly a Greek chorus, but they certainly provide dramatic counterpoint and local color. We  meet the sisters at their mother’s funeral reception, but Mary Beth leaves in a huff when she hears from the gossipy neighbors about Priscilla’s intention to sell the family house. Unfortunately, they do not have much choice in the matter, due to the precarious state of the Connolly finances, but Mary Beth is not inclined to look at things coolly and dispassionately.

Naturally, she turns up at a bar, immediately gravitating towards the scummiest man she can find. In retrospect, that was probably a mistake, considering she is forced to kill him in self-defense later that evening. Even though it goes against her initial instincts, her sister agrees to help cover up the arguably justifiable homicide, because the circumstances surrounding it look really bad. Of course, this course of action will inevitably lead to complications, especially when Mary Beth fatefully returns to the crime scene.

So, the small-town noir game is on. The players will include a rookie sheriff’s deputy with a crush on Priscilla, a cynical madam, the disillusioned women working for her, and a trio of busy-bodies who aim to restore the town’s moral fiber. There will also be sea shanties from Coffin and some tasty-looking Haddock.

…a smart, acutely sensitive performance that cranks down the glamour in favor of L.L. Bean and Carhartt…

Yes, the musical interludes sound weird, but somehow, they work. There is no doubt they give the film a distinctive vibe. Arguably, they also elevate the well-played but not especially ground-breaking narrative, by subliminally linking it to the danger and tragedy of all our collective nautical archetypes. Believe it or not, Coffin makes the film.

Be that as it may, Sophie Lowe does some of her best work yet as Priscilla Connolly. It is a smart, acutely sensitive performance that cranks down the glamour in favor of L.L. Bean and Carhartt. Morgan Saylor effectively contrasts and plays against Lowe as the impulsive Mary Beth Connolly. Their sibling chemistry together is believably dysfunctional, like it is the product of some difficult shared history. However, Margo Martindale steals the picture out from under them as the cantankerous but ruthless brothel-keeper, Enid Nora Devlin.

Martindale could even get some awards buzz if the film gets a late-year theatrical release, but Coffin will be the real winner. Many of the viewers who bought the traditional O Brother, Where Art Thou? soundtrack will most likely be looking him up online after watching the film. Recommended for fans of Jim Thompson Americana noir, Blow the Man Down screens again Saturday (5/4) and Sunday (5/5), during this year’s Tribeca.

*lead image courtesy of Blow the Man Down (2019) and Tribeca