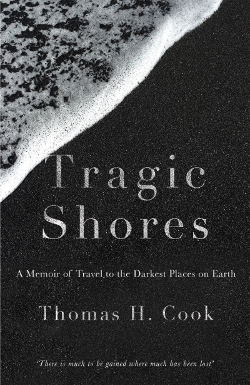 Tragic Shores: A Memoir of Dark Travel by Thomas H. Cook is a personal memoir of exploration (both external and internal) and a strangely heartening look at the radiance that may be found at the very heart of darkness.

A keen traveller, Thomas H. Cook has always been drawn to rarely visited, unusual destinations that hold a sense of darkness that evoke powerful emotions and profound memories. In this stunning memoir, Thomas travels with his wife and daughter to less traditional family holiday spots, showing what these dark places can teach us about human history and ourselves, and how much is to be gained where much has been lost.

The darkness can be literal, as in the perfect black of the underground salt cathedral at Wieliczka, Poland, and the complex labyrinth of the Japanese Underground Naval Headquarters. But it also veils places we pretend not to see because of the human acts that took place there, popular destinations with more to offer if you look past the showy spotlight, and sites that reveal some of our most basic universal instincts. From watching the pilgrimage of the desperately hopeful at the healing spring of Lourdes in the Pyrenees, to making the treacherous cliff-side descent to the isolated leper colonyKalaupapa in Hawaii, to walking the forgotten trail to Bluebeard’s Castle of horrors in Machecoul, France, Thomas takes us to significant locations around the globe.

In the famously captivating prose of his successful novels, Thomas narrates his travels to reveal the tremendous value in traveling to unusual places and the connections that can be made by taking yourself, and those who you travel with, to places that encourage a deeper understanding of life and history.

Wieliczka, however, was no midway attraction.  For nine centuries, through 200 kilometers of passageways and in the dugout space of 2,040 caverns, the work of mining salt had relentlessly gone forward.  It was a labor whose arduousness and conditions no tour could possibly convey, but the curious thing about Wieliczka was that the miners, themselves, appeared to have had little interest in conveying it.  Of all the scores of carvings that rose everywhere around us as we made our way deeper into the mine, I saw not one that suggested the actual function of the mine nor gave much indication concerning the lives of those who’d toiled here.  Some sort of history of the mine, complete with such figures, has evidently since been added, but on the day I came to Wieliczka, I saw no such representations, no salt miners with picks digging out blocks of salt, nor tossing those blocks into wheelbarrows, nor bearing this treasure away.   From what I could tell, the carvings of Wieliczka dealt only with escape.

“It’s all salt,” the guide told us.  “Take your finger and touch the wall and taste.”

Everyone did, and sure enough, the taste was salt.

“Everything you see here is made of salt,” the guide said.

And what you see at Wieliczka is indisputably spectacular, room after room of figures and reliefs.  From the 13th century onward the miners of Wieliczka had labored to create a curious underground world.  Throughout most of that period Catholicism had predominated and in response to its pervasive worldview, Wieliczka became a gray-walled cathedral.  There are carvings of the Nativity and carvings of the Last Supper and countless carvings having to do with the iconography of both Old and New Testaments, the flight from Egypt and the flight from Bethlehem.  Communism had had a different worldview, of course, and once it took control of the mine, the miners had been encouraged to explore other themes.  Their response, at least judging by the salt sculptures they carved during this period, was to fall into fantasy.  While gray-eyed Stalinism reigned above, below, in these unlighted chambers, the miners of Wieliczka carved spectacularly whimsical figures:  fairies and gnomes and all manner of fantastical creatures.  As a result, these parts of the mine looked less like a church and more like the playroom of a young child.

Indeed, a sense of childlike escapism, even fairytale whimsy, runs throughout Wieliczka, so that visitors increasingly reacted to the mine as if they were attending a kindergarten art show.  As we moved from chamber to chamber, I noticed that the people in our group often paused to release the sort of sighs usually heard from those gathered in front of the Christmas windows at Macy’s or after a very young child has made a particularly cute remark.  It is the sigh one offers to the harmlessly adorable, an homage paid to that which charms, but does not awe.

And yet there is something awesome about Wieliczka.  In part it is the recognition of just how old the mine is, and of the vast number of men who must have labored here over the last nine centuries.  Their number cannot be calculated, though it must have been in the many thousands, and their labor had to have been arduous, to say the least, given the fact that as late as 1850 a visitor described “half-naked” miners working in chambers where the temperature was a chilly 15 degrees Celsius.  In the flickering of scores of Bengal lights, they were hacking blocks of sparkly-gray salt out of the chamber floor while other workers, presumably less skilled, loaded these same blocks into wheelbarrows and bore them to the surface.

The curious thing – perhaps the true mystery of Wieliczka – is that when the work day ended, rather than return immediately to fresh air and daylight, some of these same miners put down their picks and took up the sculpting tools with which they then carved those statues of St. Francis and Joseph that one of the mine’s 19th century visitors described as already melting away in the mine’s humid upper chambers.

In fact the admittedly impressive array of figures that pop up around every corner of Wieliczka are simply those that remain intact, while countless others perished long ago.  To carve in salt is not to carve for the ages, and yet carve they did, these miners, assiduously and determinedly, and evidently – since no mention was ever made regarding their being paid for this added labor – for the love it.   And there was certainly plenty of love on view at Wieliczka, a love of God, of faith, of fantasy, and at last a love of grandeur that is spectacularly on display in the mine’s most famous chamber.

St. Kinga Chapel is the true masterwork of Wieliczka.  It began when a massive block of green salt was excavated, leaving an enormous chamber, 54 meters long and and twelve meters high.  This gigantic room is now a full blown Catholic chapel, complete with altar, sculptures, reliefs, and even several impossibly grand chandeliers, all made entirely of salt.       It is as if the miners who perfected this chamber were intent upon creating an underground Versailles, a palace hall render in the gloomy color of unprocessed salt. If the Underworld had an antechamber, I thought, it would surely look like this.

Others in our party were equally impressed, a fact evidenced by sighs of genuine awe.

For a time, I stared about, truly speechless at the sight, and struggling quite futilely to take it in.  The chandeliers were blazing, and the light that came from them flickered in all the surrounding walls.  This created a vaguely mirror ball effect, not bright and dazzling, but with its millions of tiny winks, somehow stranger and more startling.

Then, suddenly, the chandeliers went out and a gasp went up, and the guide spoke.

And so it was, at least physically, for we were now just over a hundred meters below the surface of the earth, a chamber into which no light could possibly penetrate.  In that blackness, I expected to hear another burst of “Mama mias,” but heard only a few murmurs of conversation, then a sign, this one of relief and accompanied by a few nervous giggles, when the lights were turned back on.

For the next few minutes I wandered rather aimlessly about the chapel, looking at its many carvings, peering up at the flaming chandeliers, noting the many figures that adorned the room.  It was easy to see why various celebrities had been “suitably impressed,” and I know that had we then been immediately ushered back to our elevator and lifted to the surface, I would have left the mine with that sense of having seen something marvelous and which had completely captivated me so that I’d utterly forgotten that it was the mine’s “darkness” that had drawn me to it, thinking to gain some sense of the hundreds of years of hard labor that had created and sustained it, all of which, as it turned out, had been quite successfully camouflaged behind tableau after salt tableau of gnomes and fairies, Catholic saints and figures of Polish myth.

But Wieliczka had one more surprise.

Thomas H. Cook is prolific, with more than thirty crime and suspense novels to his credit, as well as having edited multiple non-fiction books and anthologies and penned several literary novels, including Elena. Six of his novels have been nominated for awards – he won an Edgar Award for his 1996 novel, The Chatham School Affair, The Barry Award for 2005’s devastating Red Leaves, and the Martin Beck Award for both titles. Red Leaves was also nominated for an Edgar, an Anthony Award, and narrowly missed out on a Crime Writer’s Association Dagger Award. A film version of one of his books, Evidence of Blood, was released in 1997. Born in Fort Payne, Alabama, he now lives in California.