I had to fold. Only had a pair of twos, which is like the saddest pair to have. I tossed my cards on the felt with disgust and regarded my fellow poker players. Pulled over the half empty bottle of Johnny Walker Black and poured myself another double.

“You got a problem, punk?” San Francisco’s Harry Callahan from Dirty Harry said to me, then handed the deck to fellow SFPD Frank Bullitt from Bullitt. Buddy Manucci from New York City and renegade cop squad The Seven-Ups cut after he shuffled. Bullitt glared at me with those baby blues the entire time he dealt us up another round of five-card draw.

“Oh, come on, guys. I’m just curious.” I picked up my cards, wished to hell I hadn’t. I had a hand as ugly as your step-sister. “I mean, look: Harry’s got the biggest gun in the room, but­–“

“Biggest in any room,” Harry cut in.

“But,” I continued, “does that make him tougher than say… Buddy, here? Buddy’s so god-damned tough he walked away from slamming his Chevy Nova into the back of a semi at like 110 friggin’ miles an hour. Ripping the roof off, too!”

“That was incredible driving,” Harry said, a little begrudgingly. One could understand, because there’s a lot that Harry does better than anyone else, but what he does worst is drive.

“Apples and oranges,” Bullitt interjected. “How can you compare the size of a man’s weapon to another man’s driving? I’m the best driver here, sport. Does that make me the toughest? Does it?”

“No,” answered Popeye. “Hell, if that were the case, then me chasing that god-damned train and getting my man would make me the toughest guy in the room. Hands friggin’ down. Hey, give me one card.”

The other guys groaned. One card? Popeye was onto a hot hand. You could tell, too, as his eyes were twinkling under the short brim of his hat, and it wasn’t just the Johnny Walker making ‘em do that, either.

I took a sip of my drink. Lit another Pall Mall, blowing the smoke up at the overhead light. “Well, come on. How hard can it be to answer my question, yeah? Over here, we have to New York City cops, both carrying .38’s. Popeye wears his on his ankle, Buddy in his left pit. Bullitt uses a .38, Harry his .44. Point to West Coast on gun toughness.”

“Go to Hell!” Buddy said to me. I calmed him down, then continued.

“That’s just guns. Popeye goes after an international drug ring. Buddy goes after a couple cop killers, who are also blackmailing the mob, for Christ’s sake. Harry goes after a psycho killer sniper, and Bullitt goes after a guy trying to disappear from the mob by using the police.” I thought for a moment. Paused for effect. “Point to East Coast.”

“What did you just say, punk?” Harry gritted at me.

“Hey man, if we were including that time you went up against the vigilante cops in Magnum Force, then maybe it would be different, but then you’d have to include the time Popeye got captured in The French Connection II, and the bad guys get him strung out on heroin, and then he kicks it. THAT’S grit and toughness, dude, hands down.”

“If that’s so, then maybe Scorpio, the freak I chased in Dirty Harry is the toughest,” Harry growled at me.

“He pays a some huge dude two hundred dollars to beat the crap out of him, that’s why. And nineteen seventy-one dollars, at that.”

The rest of us looked at each other. Nodded. “Point to the dead psycho killer sniper,” I admitted.

“Are we gonna play poker, or just talk all damn night long?” Popeye said. Looked over at Bullitt, “It’s your turn, Frank.”

Bullitt saw and raised another five. Was probably figuring Popeye was bluffing with that one card request bullhooey.

“But still,” I mused over my cig and drink as I watched Buddy fold and sit back from the table, “There’s nothing tougher than Harry’s speech. I mean, it’s so damn tough, it’s iconic in its toughness.”

“And remember,” Harry said as he poured himself another drink. “I would stop at nothing to find Ann Mary Deacon. Stepped right on that punk’s shot leg to try and get the location of where she was dying.”

“Didn’t work though, Harry, did it?” Bullitt countered.

“It did, but she was already dead,” Harry said with some heat. That girl’s death was a sore spot with him, no doubt. He folded his cards at that point. “At least I didn’t let my partner get shot while watching a state’s witness, Bullitt.”

Silence now in the room. Popeye rapped his knuckles on the table, startling everyone. “Come on now, boys,” he said. “You gonna let me win this hand, or what?”

It was obviously getting tight, and really, was there a way to ever know which of these four cops were the toughest? Maybe it was apples and oranges, as Bullitt said. Tough is a god-damned relative term, but it sure as hell makes for good cinema. ALL of these guys sittin around this table are the kinds of cops you’d want to go to if you had a case to solve.

“A toast!” I said, suddenly raising my glass. “To you four, tough bastards. To hell with all of ya!”

Buddy laughed. Harry didn’t, but drank. Bullitt smiled as he threw in his cards. Popeye just grinned as he put his down on the table, face up.

We couldn’t believe it: he’d bluffed with the other pair of twos! 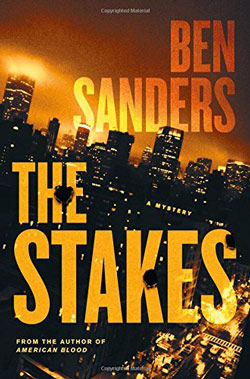 The Stakes by Ben Sanders follows an NYPD robbery detective who uses his insider cop knowledge to rob rich criminals (available March 6, 2018). Rip-offs are a dangerous game, but heist man Miles Keller thinks he’s found a good strategy: rob rich New York criminals and then retire early, before word’s out about his true…

How We Compiled The New York Times Book of Crime

I’ve had a good amount of exposure to crime as a journalist, which influenced how I approached a task like editing The New York Times Book of Crime. But, of course, like all of us, my first responses to crime were crafted much earlier as a kid growing up in the Bronx. I grew up…