Book Review: Throw Me to the Wolves by Patrick McGuinness 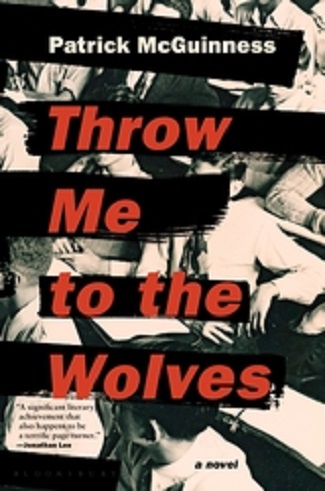 Throw Me to the Wolves

In Patrick McGuinness’ Throw Me to the Wolves, a classic police procedural is turned upside-down when the investigating detective realizes that the man accused of murder is someone from his past.

Throw Me to the Wolves begins with a beautiful young murder victim named Zalie and a man falsely accused, but that is mostly where the crime fiction tropes end. The book extends beyond the crime and explores the way our histories can haunt us. By flicking from the cramped police station of Ander’s present to the cold and looming prep school of his past, the novel creates an intricate world for readers to get lost in.

London is up in arms over Zalie’s death, and the police are desperate to find her killer. All signs point to Michael Wolphram, a wealthy but extremely private man who has been marked as the odd one out his entire life. He is, by all means, a loner.  He lived in the same building as Zalie, and though the two often exchanged pleasantries, it turns out Zalie found him a bit weird. The case appears to be a simple open-and-shut one, and the media has already fallen all over Wolphram, dragging him through the mud for his eccentricities that only appear dangerous under the harsh light of the police proceedings. For example, one of Wolphram’s most damning traits, according to the media, is that he loves books:

I looked—yes—he had one of those free hessian book bags. ‘I love books!’ it declared, the love done as a big Valentine heart and the shop’s name and address—an arcade in the old town—happily blazoned across it. The bookshop had to close. They got bricks through their windows, shit through their letterbox. I ❤ Books, AKA ‘Monster’s secret book obsession’, as [the reporter] Lynne Forester had it.

But the narrator and lead detective on the case, Ander (who switches between the Dutch name Ander and Alexander, a name that draws less attention) knew Wolphram during his childhood, and he wasn’t the monster the media is portraying. Ander remembers Wolphram as a kind man among menacing and harsh teachers at Chapleton College, a hellish but elite preparatory boys’ school he attended as a young man. Wolphram cared about what he taught the boys, and he genuinely wanted them to learn something from their time spent in his classroom. Despite his passion for teaching, he was also coolly reserved. He was not a teacher who cracked under pressure or tried too hard to relate to students, and he was always calm, except once. A crazed teacher had taken things too far with Ander’s best friend Danny and began abusing him verbally and physically during a lecture. Ander runs for Wolphram, the only teacher he feels comfortable with, and for the first and last time, the kids see Wolphram lose his temper. Wolphram uses few words, but he shames the abusive teacher without reserve and briskly ushers Danny out of the room. Days later, Danny’s mother dies, and though he was only meant to leave the school for a week to attend the funeral, he never returns—a departure Ander is still haunted by more than twenty years later.

Ander must reconcile the Wolphram he knew in school—a savior and a trustworthy adult—with the one plastered all over the news—a murderer and a monster—and he can’t. In Ander’s eyes, Wolphram simply cannot be the man who committed this heinous crime. He has some trouble convincing his partner, Gary, of this, but eventually, the two come to an agreement: Wolphram was being framed. With the insight of his partner and some smart sleuthing, Ander is able to get to the bottom of the crime. But Wolphram does not come out unscathed. After being torn apart and laid bare for all to see by the media, Ander and Gary know that the happily reclusive Wolphram will never be able to return to his private and solitary life and exoneration will not clear away the fog of the media’s bias.

Whether innocent or guilty, it’s all just scorched aftermath for him now.

Much of the novel is spent on the characters dealing with what happens after. After the crime, after the subsequent media backlash, and after the exoneration. Ander is wracked with guilt over what this all means for Wolphram and his future. But beyond the worries of and for the main players, the novel features a few lovely lines devoted to the less examined characters within the story, like the late Zalie’s boyfriend:

Tim is ashamed when he’s with Zalie’s parents, because he knows that he is young, and that he must move on, find someone else and leave this place; that his future days will look like a betrayal of the girl he loved. He already knows this; even in the thick of his sorrow, he knows—he and Zalie’s parents are in it together, but only up to a point. They have no choice, they are on a train called grief and it won’t stop. And why would they want it to? But he must. Somewhere up ahead he will tell them: ‘This is my stop,’ and he will get off. He will dread it and want it, too, the falling away.

McGuinness’s characters are always coming up with intelligent and inquisitive words, and each of them is charming in their own way. Even Ander’s partner Gary, who is very easy to dislike at the beginning of the book, worms his way over to your good side by the novel’s end. Underneath his typical television cop exterior, he is full of sage advice. He even has a few things to teach Ander when Ander begins Googling his old friends from Chapleton and begins to type in Danny’s name:

‘Leave them alone. Leave him alone. The past may be your local, but he doesn’t drink there anymore… Just because you can find people doesn’t mean you should. In real life, outside the films and the stories, the long-lost friend stays long lost, which is usually how he wants it.

The cast of characters also includes Marieke, Ander’s niece, who is fiercely intelligent despite her young age. The scenes involving her and Ander were my favorite, as Ander becomes infinitely more likable when he is indulging Marieke’s insatiable curiosity in the world, or when he is letting her stay up late to watch television. There is also Vera, a charming and insightful old woman who cannot let go of the past, and leads Alexander to think there may be some truth in ghost stories.

Throw Me to the Wolves is a literary crime novel that delves deep into the secrets of childhood, and explores when to let go of the painful memories and friendships of the past. It is intriguing, moving and poignant, with heartbreaking lines and characters who dig their way into your heart whether you want them to or not. It is a book that will stay with you after reading.

Alyssa is an intern at St. Martin's Press.