Brian Klingborg’s Thief of Souls (Minotaur Books, May 2021) marks the launch of a new mystery series following Inspector Lu Fei. When a brutal murder in a rural village in Northern China sends shockwaves all the way to Beijing, Inspector Lu Fei, exiled to this tiny town, is seemingly the only one interested in finding justice for the murdered village girl.

Read on for our Q&A with David Rotstein, the artistic designer of the stunning new cover. Thief of Souls is available for pre-order now!

What inspiration did you take from Thief of Souls that informed the cover art?

The book is a delight, and its unique setting and cast of characters were major inspirations for the cover art. I wanted the visual to convey the idea of all of these interconnected lives and stories nestled into one place. The final cover is somewhat close to what I imagined very early in the process (which is not always the case for a cover design), and I knew that the concept would pair well with the title words; I particularly enjoy how the plural (‘Souls’) works with the numerous homes. I also love the way that many of the buildings are partially covered by one another, as well as the interplay of the bushes and shrubs peeking out from among the buildings. The effect gives an implication of something ‘hidden,’ or at least not fully revealed. The final illustration was done by Micaela Alcaino (micaelaalcaino.com), and she did a truly fantastic job bringing this cover to life.

Tell us a little about the process of creating the art for Thief of Souls.

In the beginning I was inspired by Chinese woodblock prints, and started by creating a preliminary visual of the concept. Those early drafts are somewhat close to the final cover, and the idea was very well received from the onset. But the problem with those early iterations was that they didn’t convey the Chinese setting with sufficient clarity. The buildings did not have the level of detail seen on the final and there were no mountains visible in the background. Some people rightly felt the setting had the possibility of incorrectly being interpreted as being the Mediteranean or America. That’s when I brought in Micaela on the project, not only to execute the entire artwork, but also to ensure that we clearly communicated the Chinese setting. I couldn’t be more pleased with the results. It was really Micaela’s illustration work that brought in a whole new visual sensibility that took the cover to the next level.

Why did you choose that typeface?

I wanted the type to be nestled into the buildings, interacting with the artwork and ‘hiding’ amidst the homes, and for the title to be spread out over the entire vertical length of the cover. As for the typeface itself—initially I wanted something that had a Chinese sensibility to help convey the setting, but all of my early attempts (which I never showed) didn’t quite get the ‘feel’ of what I had intended. The final typeface selection was the result of a process that slowly and incrementally took steps backward, moving away from those preliminary instincts, until the font simply ‘felt right’ to me. This trial and error process is very common to design and it always reminds me of cooking a big pot of soup, continually adding, adjusting, and changing ingredients, all the while pausing, assessing, and tasting, until you think it’s finally ready to bring to the table to share with friends and family. I hope that people enjoy the cover, and that it invites others to delve into the world of this wonderfully great read. 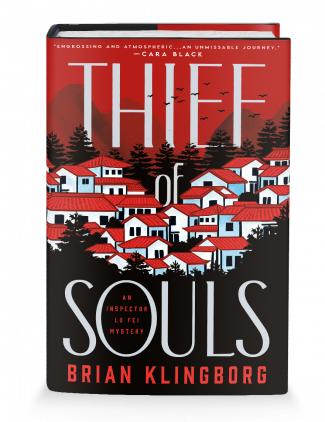 In Brian Klingborg’s Thief of Souls, a brutal murder in a rural village in Northern China sends shockwaves all the way to Beijing but seemingly only Inspector Lu Fei, exiled to this tiny town, is interested in finding justice for the murdered village girl …
Filed Under: Brian KlingborgChinaCover RevealDavid RotsteinEssaysInspector Lu Fei Mystery SeriesInterviewsQ&A