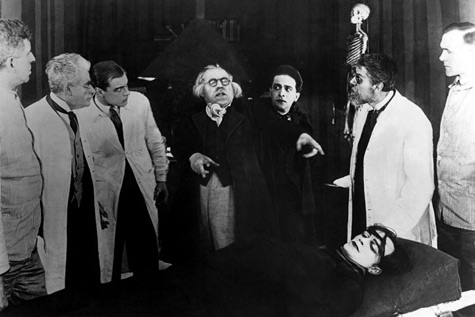 Yes, our literature and cinema are filled with Mad Scientists. This character has long been a mainstay of the darker corners of prose and film (often leaping from the former to the latter). From Dr. Frankenstein to Dr. Jekyll to Dr. Caligari (avoid his cabinet, people!) to more modern takes on the Mad Scientists, like Doc Brown (just kidding, he’s above any reproach) or whoever was the crazy doctor in The Human Centipede—a movie I have not nor will I ever see, because what the HELL, man?—we all know this fictional character.

Here’s the thing, though… some of the things that people of science have created, or at least tried to create, would put most literary or cinematic mad science types to absolute shame. Just take a ride on this crazy train and you’ll agree that when it comes to Mad Scientists, the history books are as crazy as any Abstract German Expressionist Drama could hope to be. You see, people really tried to invent these weapons of questionable destruction: 1. V-3 Of course you have to leave it to the Nazis to top the list today. Those guys were always inventing wacky weapons! I’ve selected the V-3, a “vengeance” weapon in the same vein as the mass-produced and rather effective V-1 and the terrifyingly advanced but not-mass-produced V-2, as it was, ahem, crazy enough to work! This weapon was essentially just a massive cannon. It was so massive it required multiple separate combustion chambers to keep adding acceleration to the shell being propelled down its barrel… its 500 foot long barrel. Now, that may seem like an insanely long barrel, and indeed it is, but the prototype could deliver a shell weighing more than 1,200 pounds a hundred miles, and at a speed of just a bit under a MILE A SECOND. Damn, Nazi scientist weapon making guys, you’re scary. 2. Nest of Bees Next, let’s take it back to the old school… the Ming Dynasty. The Chinese have long been credited with creating the first reliable explosive compounds (commonly referred to as gunpowder, but that’s so limiting!). Their crazy weapon for today’s list is the Nest of Bees, which was essentially a hexagonal or octagonal tube stuffed with up to 32 arrows, each of which was essentially rocket-propelled. With the touch of a flame, a warrior could launch nearly three dozen arrows hundreds of yards at his enemies, who suddenly hated their lives. Arguably, nothing with quite the mix of volume and lethality would be seen until the Gatling Gun.

3. Metal Storm Limited This Australian company employs some very intelligent, very clever, and potentially bats inventors. These fellahs have created all sorts of crazy weapons over the years, but by far the jewel in their crown is the weapons system that can apparently fire projectiles at the rate of… one million-plus per minute. Yes, a million rounds per minute. That’s 16,666 rounds a second. And that… is crazy. The weapon achieves this rate of fire by using independently propelled projectiles. And, incidentally, it also achieves my new goal of never upsetting anyone who works for Metal Storm Limited.

4.Whirlwind Cannon Well, surprise, surprise… it’s the Nazis again. This time we’re talking about their lil’ Whirlwind Cannon. Which was actually about the size of a train car, and not really lil’ at all. The thing looked kind of like a huge metal salt shaker perched atop some circular ducting. It was supposed to work by firing a jet of concentrated air into the sky, knocking enemy planes clear out of the blue with the ferocity of the blast. This result was to be achieved through the concentration of air pressure generated by a contained explosion. But guess what it actually achieved? You guessed it: the sad trumpet music. 5. Bird Bombs Just to prove that we don’t have an anti-Nazi bias* we’ll end today with a crazy weapon designed by a World War II-era American, renowned behaviorist, and generally bad weapon designer B.F. Skinner. Dr. Skinner created the concept for one of the first guided bombs, the difference between his weapons system and more modern systems being that while functional guided weapons rely on satellites, lasers, radio waves, and so on, his relied on pigeons. A single pigeon per bomb, that is. The birds were to be trained to peck at an image projected onto a screen inside the bomb, with their pecks directing the control surfaces of the weapon and steering the bomb into target. It was never really taken seriously or tested out, because Jesus, come on, Skinner. Really? Bird bomb?

*We do have an anti-Nazi bias.