The Yemen Contract by Arthur Kerns is the 3rd book in the Hayden Stone Thriller series, where Stone finds himself in Yemen trying to save his kidnapped partner and foil a terrorist plan that only he can stop (Available June 28, 2016).

CIA operative Hayden Stone has his work cut out for him. Abdul Wahab seeks to make a power grab in the exotic land of Yemen and establish a terrorist base from which to launch an attack on Europe.

Wahab lures Stone to Yemen by kidnapping his partner CIA officer Sandra Harrington in Sicily. Stone comfortably operates in this world where tribal leaders vie for power with the central government, al Qaeda exerts its influence through murder and mayhem, and double-dealing among Bedouin and townspeople is a national pastime.

The cat and mouse game goes from the capital Sana’a, to the deserts in the far east of the country, and to the mountain villages in the north. Stone has a personal stake in this mission, but can never keep his eye off of the greater plot developing, the one that puts millions in peril, and that only he can stop.

Lying still. Eyes closed. Sandra Harrington listened to the lace curtain brush against the window frame. She smelled morning rain, a surprise for hot, dry Sicily, but then this was the stormy month. The rain would clear the air of ash drifting in from Mount Etna. She detected another odor. Blood.

Sandra’s eyelids pushed open, and she focused on the ceiling’s dusty light fixture. Her body felt strange, numb. Only after effort did her fingers move. Her left arm ached from where the fat man had jabbed the needle through the sleeve of her blouse. The sequence of events began to roll through her mind as she struggled to lift herself from the bed.

After arriving from Sana’a, Yemen and checking into her hotel, she had phoned the agent she was to meet. The man had not appeared at the café at the appointed time. An hour later, after doing the required countersurveillance, she arrived at the alternate meeting place and waited for five minutes by the fountain in the quiet courtyard. He didn’t show.

A fly buzzed in the window. Sandra managed to raise her right hand and saw blood. She dropped the hand down to her belly and thigh, which were bare and felt sticky.

She thought again about the previous afternoon. Failing to meet her source, she became anxious. Had al Qaeda discovered him? She had hurried back to her hotel. A block away, she turned a corner and bumped into the three men. They made no effort to disguise their intentions. The fat man stabbed her in the left arm with a hypodermic; the man with the lazy eye wrapped a scarf around her face; the young one, with severe acne, who didn’t seem to know exactly what to do, held back. They walked her to her hotel, entered by the back door, and took her up to the room. They threw her onto the bathroom floor, where as she stared at the small hexagon tiles. She slowly lost consciousness.

Raindrops flew in from the window and sprinkled her naked body. Sandra ran her hand across her skin, feeling gluey blood. Where did it come from? She felt for cuts or wounds. None. Inch by inch she raised herself. The wind had picked up and the curtain slapped at the window. In the distance, thunder rumbled. She stretched out her numb left hand and felt cold skin.

She turned her head and saw a young woman, not older than fifteen, lying half-covered with a bloody sheet. A long gash ran from the young woman’s left ear across her throat and halfway up to her right ear. Her empty eyes turned backward toward the carved headboard. A small gold cross lay on a thin necklace between her breasts.

Again, she struggled to raise herself. The effect of the drug made movement almost impossible. She managed to slide her legs off the bed, and with her good arm pushed herself up to a sitting position. A siren wailed in the distance. Had al Qaeda alerted the police? Part of the plan? Two naked women in bed together, one with her throat slashed. She would be accused of murder. With her body not responding, Sandra knew escape was out of the question.

She reached over and pulled her cosmetic bag off the dresser. Then both she and the bag fell to the floor. The kit landed under the window. She inched toward it and stretched out her good hand. Outside the room, excited voices came from the staircase. She hadn’t much time.

From the bag she removed an electric toothbrush. Her left hand still would not function, so with her right she put the bottom of the brush into her mouth, bit down, and turned the base a half-turn to activate the transmitter. Breathing heavily and hearing a pounding on her door, she switched on the electric toothbrush. It hummed.

The door to her room was about to be breached when, with one supreme effort, she grabbed the window ledge, pulled herself upright, and then tossed the humming brush into the alley below.

As the police entered the room shouting, Sandra collapsed, praying the signal from the emergency alert system inside the toothbrush had connected with the CIA satellite overhead.

The waiter carried a hamburger and french fries to the table where Colonel Gustave Frederick sat ramrod straight in a weathered outdoor stacking chair. Seated next to him, Al Goodman had elected to have the soup of the day, his reading glasses atop his thinning black hair.

Colonel Frederick studied his burger, then scraped off much of the condiment, which was either old salsa or bad chili. He took a bite. It wasn’t as bad as it looked.

The two sat under a pale, cloudless sky at the U.S. Embassy’s outdoor snack area, which served the staff during the milder months. From beyond the compound, in a distant minaret, a tape-recorded muezzin’s call to prayer floated over the quiet, parched landscape. Frederick had arrived a month before to head a CIA special operations group. Jihadist terrorists were his targets. He studied Al Goodman’s soup and wondered if it tasted better than his burger.

“How long will you inspectors be at the post?” he asked Goodman, who was on the Department of State’s Inspector General’s team inspecting the embassy’s security operations.

“Two weeks. How about you?”

The CIA had sent Frederick’s group to Yemen to investigate reports that al Qaeda and its sympathizers were planning to set up mirror terrorist operations similar to the ones in Afghanistan. Recent defeats by U.S. Special Operations had put the jihadists back on their heels, but not broken their spirit. Yemen was also the homeland of Osama bin Laden’s family.

“This is an interesting country. Never been here. My last post was Monrovia, Liberia,” Goodman said as he spooned his soup. “Before I left, two of your people got into a shooting match with jihadists. The jihadists lost.”

Frederick laughed. “You have to be referring to Sandra Harrington and Hayden Stone. Sandra is working for me now, and Stone has retired, for the time being.”

“Compared to Monrovia, this is a garden spot. Quite an interesting place.” Frederick smiled. “Very tribal. Men walk around town with AK-47s slung over their shoulder. Daggers in their belts.”

CIA Station Chief M. R. D. Houston approached, pulled a chair under the shade of the umbrella, and joined them. Houston, with an earnest face and jug ears, was also newly arrived, having been transferred in from Cape Town. Frederick had met him a few months before during the African operation.

“Colonel. We have a cable from headquarters that’s Level: Immediate. Looks serious. Better come to the station to read it.”

Frederick nodded and rose, then asked Goodman if he’d like the fries he hadn’t touched. Shaking his head, Goodman said, “The kitchen probably used palm oil. My arteries are clogged enough.”

On the third floor of the main embassy building, behind a vault door, Frederick stood and read the cable. The CIA at Langley, Virginia reported they had picked up an emergency signal originating from Syracuse, Sicily. It had Sandra Harrington’s signature.

“No. All their people are north on a priority rendition.”

“Anything interesting coming in on the terrorist communications traffic?”

Houston handed him three cables each dated days apart. “Seems some bad guys traveled from Beirut to Palermo a few days ago. The last cable mentioned something about a lot of volcanic ash in the air.”

“What the hell does that mean?” Frederick asked. “Is it some kind of code?”

“No, Mount Etna’s been spewing out smoke and lava for the past few days. Major eruption. The region around Syracuse has been covered with ash.”

“Shit.” Frederick threw down the cables. “Terrorists traveling to Sicily and I sent Sandra there without backup.”

Mark Reilly, a CIA case officer, entered the secure space. Under cover as an Army officer, he wore silver lieutenant colonel’s oak leaves on his shirt lapel. Frederick had specifically requested him for his team. The past spring they had worked on the French Riviera operation. Frederick found him tough and a seasoned veteran.

Reilly took the cable and paged through it. “Why didn’t we know about this?”

Frederick threw off the question with a wave of his hand. “I need you to go to Sicily and find her. Learn what happened. Take the jet. Go as soon as you get your travel documents and operational gear together.”

“I could use backup.”

“We know someone who speaks Italian,” Frederick said. “Hayden Stone.”

See also: How Counterintelligence and Counterterrorism Has Changed by Arthur Kerns

Arthur Kerns joined the FBI with a career in counterintelligence and counterterrorism. On retirement, he became a consultant with a number of US agencies including the Department of State, which took him to over sixty-five countries. His award-winning short stories have been published in a number of anthologies and he has completed a mystery based on the unsolved 1929 murder of an FBI agent in Phoenix. His book reviews appear in the Washington Independent Review of Books, wirobooks.com. 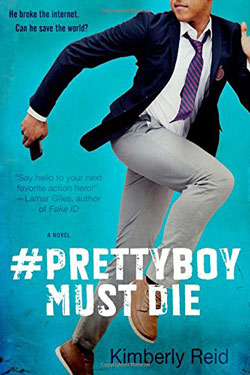 Prettyboy Must Die by Kimberly Reid is a fun, fast thriller about a CIA prodigy's whose cover is blown when he accidentally becomes an internet sensation (available February 13, 2018). When Peter Smith’s classmate snaps a picture of him during a late night run at the track, Peter thinks he might be in trouble. When… How Counterintelligence and Counterterrorism Has Changed

One night, after working on a murder mystery that was going nowhere, I toyed with the idea of starting an espionage thriller series. Along with tossing around possible locations and when the action would take place, I had to come up with realistic characters. Who would be the protagonist? Naturally, all the interesting people I…