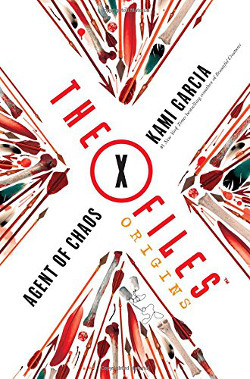 The X-Files Origins: Agent of Chaos by Kami Garcia tells the backstory of how Fox Mulder became a believer (Available January 3, 2017).

In the spring of 1979, seventeen-year-old Fox Mulder has bigger problems than applying for college. Five years ago, his younger sister disap­peared from their home and was never heard from again. Mulder blames himself, and his mother blames his father, who has retreated into his top-secret work for the State Depart­ment. In Fox’s senior year, his dad has moved him to Washington, DC―away from his friends on Martha’s Vineyard.

While Mulder doesn’t mind the fresh start and not being known as “that kid with the missing sister,” he’s still obsessed with finding Samantha. So when a local boy turns up dead and another child is abducted, Mulder can’t stop himself from getting involved. Could there be a link to his sister’s case? As he uncovers the truth, Mulder and his friends find themselves on the trail of a serial killer.

Sucked into a world where conspiracies, the occult, and madness overlap, Fox Mulder starts to believe.

Packs of teenagers, pumped for the official start of spring break, rushed past the black sedan parked across from the high school, unaware they were being watched from behind the car’s tinted windows. Jocks wearing Wilson High jerseys carried pretty cheerleaders on their shoulders, enjoying the chance to finally touch some thigh. Other guys horsed around in the road, showing off for girls in tight jeans who pretended not to notice them.

Most of the teens didn’t give the car a second glance. Black vehicles with tinted windows were as common as pigeons in Washington, DC—home base of the Secret Service, the CIA, and the FBI.

The man in the passenger seat scanned the face of every boy jaywalking across the road, searching for one in particular. “No sign of him yet,” he said, directing his comment at the older man behind the wheel.

“A powerful observation, Reginald,” his boss deadpanned. He sounded like somebody’s grandfather, and next to Reggie, he looked like one.

Reggie’s dark brown skin was as smooth as a newborn baby’s, and the short Afro tucked under his tweed newsboy cap only added to his boyish good looks. His bushy black mustache and sophisticated style—like the fitted white shirt, tan suede blazer, and flared black slacks he had on today—kept him from being mistaken for a college kid.

Even if the boss ditched the starched shirt, wide tie, and conservative side part, he couldn’t hide the lines etched into his pale skin like scars, or the worn look behind his cold eyes.

Reggie turned his attention back to the teens. They were still running on adrenaline and the illusion of freedom that youth offered. He watched them with a pang of envy. “It’s like they think nothing can touch them. Remember how that felt?”

“No. I was never an idiot.” The boss tapped his thumb against the steering wheel without disturbing the funnel of ash on the end of the cigarette in his hand. “People see what they want to see, which is generally nothing important.”

So much for small talk, Reggie thought as he continued to search the horde of kids. “There’s no way we could’ve missed him.”

“Your powers of deduction never disappoint me.” The boss took a drag from the Morley and exhaled slowly.

The cloud of smoke made Reggie’s eyes water, but he ignored it and focused on the funnel of ash, waiting for it to break off.

“The prodigal son appears.” The boss pointed his cigarette across the street at two boys walking down the sidewalk with backpacks slung over their shoulders.

Fox Mulder was a handsome kid—lean like a swimmer, with a look that was the perfect balance between clean-cut and I-don’t-give-a-crap. His dark brown hair hit just past the collar of his striped shirt, and the front was long enough to cover his eyes a little. Girls ate up that kind of thing. Fox stared into space as he shuffled along, holding a crumpled piece of paper.

The other boy was a different story. He was shorter than Fox by a foot, and the kid’s straight blond hair hung in his face, as if he was growing out a bad bowl haircut. His dirt-brown T-shirt featured a faded image of a scene from Star Wars, and his jeans were so long that the frayed bottoms dragged on the sidewalk.

The kid was talking nonstop, gesturing wildly and buzzing around Fox like a housefly. From the look of it, he could use a strip of duct tape to cover his mouth.

Reggie wasn’t a fan of talkers. They were a liability. “Who’s the kid with Bill Mulder’s son?”

“Are you familiar with the concept of research?” The boss finally tapped the cigarette against the edge of the ashtray, and the ash broke off in one piece, as if on command. He crushed the butt and focused his watery-blue eyes on Reggie. “Let me enlighten you. It’s a practice professionals use to obtain information so we don’t have to rely on assumptions.”

Reggie was tempted to fire back with a smart remark of his own, but the boss would make him regret it later. The organization they worked for was built on the backs of men and women with ice running through their veins—individuals willing to do whatever needed to be done, regardless of the cost—and the smoking man next to him was one of them.

“What’s my assignment?” Reggie wanted to get down to business. “Do you want me to collect Bill’s son?”

“Taking Samantha Mulder was partly insurance to keep her father from talking.” The boss opened a new pack of cigarettes and flicked his wrist, freeing one from the box. “And we all had to make sacrifices. But it would break Bill if we took his son, too, and right now we need him. The Project is at a critical stage that requires people with specific skills, and Bill Mulder is one of them.”

He lit the Morley and continued talking, with the cigarette tucked in the corner of his mouth. “So we have to keep an eye on Bill and his son. Follow the boy around and let me know if he does anything interesting. We’re also assessing Fox for potential recruitment.”

Tailing a teenager during spring break was a crap job, but Reggie wasn’t high enough in the food chain yet to complain about it. Instead he asked, “Who the hell names their kid Fox? His parents must hate him.”

“Bill and Teena are too busy hating each other. They were barely speaking when Bill moved out of the house in the fall.” The boss stared out the window, tracking Fox Mulder’s progress down the street. “The timing was perfect, actually. We stepped in and relocated Bill from Martha’s Vineyard to DC so he could work on the Project full-time. Fox came with him.”

“I’m surprised the kid’s mom let him go,” Reggie said. “My aunt and uncle divorced when I was young, and they butted heads about everything.”

“If I gave you the impression that I want to swap childhood memories, let me clarify. I don’t.” He took a long drag from his cigarette, and a new funnel of ash began to form. “Interestingly enough, sending Fox to live with his dad was Teena’s idea.”

“It does.” The boss exhaled, and a ribbon of smoke curled its way toward Reggie, who finally coughed and reached for the window handle. The boss snapped his fingers and pointed at the glass. “It stays up.”

Reggie ignored the burning sensation in his throat. He refused to appear weak in front of a man who had once referred to weakness as a disease during a debriefing. “Do you think Fox’s mom knows something?”

“The jury is still out. But when the verdict comes in, I’ll deal with Teena Mulder personally.” Another trail of smoke snaked from the boss’s chapped lips. “You focus on Fox. Update me directly—and only me.”

“Keep them to a minimum. We don’t want to leave any bread crumbs. So from this point on, you no longer have a name.

Kami Garcia is a #1 New York Times, USA Today, and international bestselling author, and the coauthor of the Beautiful Creatures and Dangerous Creatures novels. Her solo works include the Bram Stoker–nominated novels Unbreakable and Unmarked, in The Legion series, and The Lovely Reckless, a standalone contemporary romance.

Kami was a teacher for seventeen years and coauthored her first novel on a dare from seven of her students. If she isn’t busy watching Supernatural, Kami can teach you how to escape from a pair of handcuffs or bake a Coca-Cola cake. Kami lives in Maryland with her family and their dogs, Spike and Oz.