I can die happy now.

I hadn't realized my life was lacking quite so much joy before this episode—I know better now.

Oh my lord—I haven't laughed that hard in ages. Bless Darin Morgan for delivering another incredible episode; it's hard to believe he could top “Clyde Bruckman's Final Repose” or “Jose Chung's From Outer Space,” but “Mulder and Scully Meet the Were-Monster” has absolutely jumped to the top of my Fave X-Files Adventures List.

A couple huffing paint in the woods (one of whom is my boy Tyler Labine of Tucker and Dale Vs. Evil) sees a giant lizard attacking one man while another lies dead in the undergrowth. Another three bodies are found, all suspiciously gnawed about the neck, and the case lands on Mulder (David Duchovny) and Scully’s (Gillian Anderson) desk.

Just as Mulder decides to throw in the towel re: monster hunting. Our boy has always been known for his impeccable timing.

Mulder, still nursing his disappointment over having so many of his beloved cryptids debunked in recent years, persists in reaching for logical explanations for the pile o' dead bodies—including one which is inexplicably lacking clothes.

MULDER: Maybe he was a nudist. Took a midnight hike in the nude…Got attacked by a bear or a wolf or a mountain lion—maybe all at the same time. That's how I'd like to go out.

But it's no bear, wolf, or mountain lion that runs through a nearby truck stop and straight at a transgender prostitute who reacts to the horny—I'm sorry, but I simply can't resist—threat with a swift swing of her giant leather purse.

The witness is sure she saw horns…and tighty-whiteys.

That's a first. Only on The X-Files could there be a giant lizard running around in underwear. Directed by the witness, Mulder and Sculls set off in pursuit, crossing paths with a wildlife control employee, Pasha (Kumail Nanjiani), who is none too happy with the unusual turn his job has taken.

iPhone in hand with his new camera app furiously flashing pictures—how hysterical is it to see our heroes moving with the times, even if Mulder can't quite figure out this newfangled technology—Fox certainly has his priorities in order. Meanwhile, Sculls has her gun at the ready, because Scully is a lady who will survive the coming zompocalypse.

SCULLY: If this thing looks like those drawings, I'm emptying my clip into it—even if it is in its underwear.

The following autopsy of the latest victim is enlivened by Mulder's enthusiastic “evidence,” mainly a shaky video of himself screaming. In true Dad/cryptid hunter fashion, Fox forgot to adjust the camera lens.

I can't even begin to describe the absolute joy this entire scene gave me: Mulder's childish excitement as he pulls up blurry photo after blurry photo; Scully's wry amusement; and this exchange in particular (and the fact that I was already shouting about the horned lizard):

MULDER: Tell that to the horned lizard, which shoots blood out its eyeballs! Yes, Scully. It's a defense mechanism—scientific fact!

SCULLY: Mulder, the Internet is not good for you.

At a hotel that Norman Bates would have been proud of, Mulder finds a secret passage, sleeps in a red thong awfully reminiscent of his classic Season Two speedo, and discovers a trashed room that may belong to the were-lizard in question.

An enlightening stop at a psychiatrist provides some fun commentary on the phallic nature of monster mythology:

DOCTOR: …he had to stab the monster in the appendix with a lance made of green glass.

DOCTOR: Who the hell knows?!

And Mulder finally beards the so-called dragon at his den—well, at the cemetery, where the whole story comes out.

It seems that Guy Mann (Rhys Darby) is not a were-lizard. He's a were-human. He was just minding his own business, lounging in the woods, when a couple of humans rushed in mid-fight and one bit him. The next morning, Guy undergoes a terrible transformation and awakes a…. 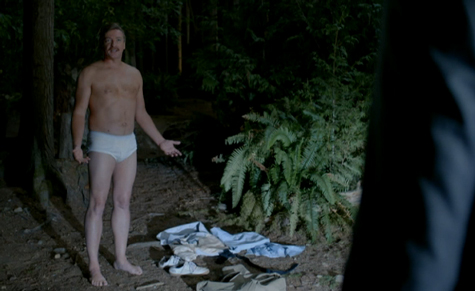 Also, he can't stop lying about his sexual life—Anderson must have had a real hoot filming that scene.

Watching all of this unfold resulted in laughter that was more on par with seal barking; there were legit tears on my cheeks. I feel like I need to go to screenwriter Darin Morgan's house with an expensive cheese basket. Rarely have I been so entertained.

Casting Flight of the Conchords and What We Do in the Shadows star Rhys Darby as the tortured lizard man was a masterstroke. I knew the moment I saw his name in the credits that this was going to be one for the books; few make me laugh harder than the Kiwi funny man, whose delivery is always impeccable and who never shies away from the silliest physical comedy.

And for all that Guy Mann's story was amusing as hell, there was also a great deal of philosophizing thrown in about human nature, the meaning of existence, and what is truly monstrous.

This is the sort of duality I've always loved about the best campy episodes: we're all cackling like mad, but at the same time, we can't help but nod and hum in agreement as the truth of the commentary hits home.

This episode was a refreshing slice of pure fun, and a great reminder that for all of the dark, tense, disgusting episodes of The X-Files, it's always known how to be goofy and silly, too.

There were some especially nice nods in this outing for the old fans: (I also appreciated the little in-joke when Sculls asks Mulder why he's throwing pencils at “her” poster. Of the original I WANT TO BELIEVE posters, the last belongs to Anderson. The others were all destroyed during filming, stolen, or simply lost to the sands of time.)

The only quibble I have is that by the end credits, Guy has gone off to hibernate for the next 10,000 years. Which means the likelihood of him showing up in any future reboots of the show—perhaps starring William Mulder—are slim.

Which is just a damn shame.

Now, if you'll excuse me, I just need to go and watch this episode on repeat until “Home Again” airs next Monday.