By Rebecca Rosenberg and Selim Algar

April 5, 2021
Journalists Rebecca Rosenberg and Selim Algar are not only the co-authors of a new true crime book, At Any Cost, they are also a married couple with two young children. Read on as these veteran journalists share how they balance their work and family life, all while managing to relate a riveting true crime story of a murder and betrayal that rocked NYC.

Theories abound as to the ideal writing environment. A rustic cabin, a Central Park bench, a room in the upper reaches of a grand hotel.

A Brooklyn cafe with erratic wifi and ornery baristas does not rank high on this list.

Yet there my wife and I sat, night after night, forcing down gallons of coffee and thousands of artisanal carbohydrates—all for the sake of our debut book, At Any Cost.

As most writers will attest, executing a full-length volume is a daunting task in any circumstance.

But when co-written as a married couple with two young children and demanding full-time jobs, the challenge can spiral.

As first-time authors, we had no experience to lean on.  Our newspaper beats had trained us in the art of wind sprint journalism—fact-finding gallops to the daily deadline.

But this alien task—a single story laid out over the course of 80,0000 or so words—was a different matter.

The rookie euphoria of our first book quickly drained during our kickoff dining table writing session. We solemnly placed our laptops across from each other, brewed a pot of potent Turkish tea, and opened up virgin pages on Microsoft Word.

Sensing the dire need for quiet, our toddler son soon issued a series of ear-splitting shrieks and thought it timely to fling his dinner remnants across the room.

Radicalized by her sibling, our daughter formed a picket line against her homework and demanded an evening of parental entertainment.

Those pristine laptop screens would remain untouched for the rest of the night. Black tea gave way to red wine and the day drew to a spectacularly unproductive close.

These scenes would recur regularly during our opening weeks in the quarry with one unforeseen challenge after another.

The subject of our book, which details the murder of a Manhattan mother and her husband’s ultimate conviction for the crime, is decidedly mature material.

As part of our research, we waded through thousands of pages of court documents—including crime scene photos and explicit portions of testimony.

With our home doubling as a writing space, we were on constant guard against having these items inadvertently commingle with Dora the Explorer coloring books and school assignments.

In exchange for prolonged silence, we offered the kids a range of incentives—anime marathons and vegetable exemptions chief among them.

But we soon come to realize that these measures were woefully inadequate. With our weekdays commandeered by growling newspaper editors and our nights in a parental half-nelson, the six-month deadline soon seemed untenable.

We had little choice but to call upon the emergency services of a mother-in-law. After hearing our plight, Rebecca’s mom, Jane, kindly agreed to trade her placid Pacific Northwest home for an air mattress in the basement of our rugged New York shanty.

With the children enjoying her lovably lenient company, we were now able to slip out of the house to our local cafes on an almost nightly basis.

Our days took on a familiar routine. Immediately after filing our stories for the newspaper in the early evening, we stocked our book bags for the coffeehouse migration.

So regular was our presence in these hushed grottos that even the surliest staffers acknowledged our entry with a nod.

We took our seats among the younger and more stylish patrons and began stacking the page count like masons—one layer at a time, over and over and over again.

Invariably, we would tussle over phrases and structure. On a few occasions, one of us could simply no longer stifle our frustrations with the other and dramatically picked up our belongings and walked out.

But after a few paces down the road, we would realize that there was nowhere else to go. The work had to get done, and the homefront—riotous with popping corn and blaring cartoons—was a nonstarter.

Finding refuge in another cafe was also pointless. We worked on each section of the book jointly and would only have to field the other person’s protests later.

So with our computer wires between our legs, we would slink back to the original venue as if nothing happened while the seated party barely looked up from their screen.

Last call would usually arrive around 10 pm, soon after the fourth cup of coffee and a final pass at a corn muffin.

Nauseated from caffeine intake, we trekked home to peek in on the sleeping kids and sedate ourselves with a nightcap.

But after a few months, hardship softened into habit.  As the weeks piled atop each other and the chapters advanced, the mountain peak appeared in the distance.

It turned out that all of those writing maxims we once dismissed as trite—commitment to daily progress and rigid routines—were far wiser than we thought.

Thanks to our surrender to these principles, the book—and our relationship—emerged intact. 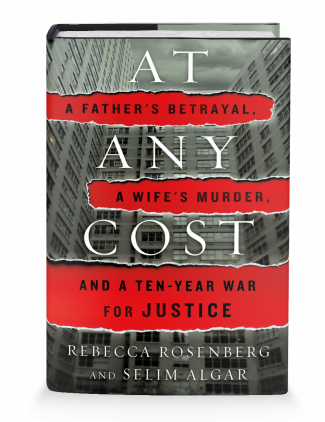 About At Any Cost by Rebecca Rosenberg and Selim Algar:

Wealthy, beautiful, and brilliant, Shele Danishefsky had fulfillment at her fingertips. Having conquered Wall Street, she was eager to build a family with her much younger husband, promising Ivy League graduate Rod Covlin. But when his hidden vices surfaced, marital harmony gave way to a merciless divorce. Rod had long depended on Shele’s income to fund his tastes for high stakes backgammon and infidelity—and she finally vowed to sever him from her will. In late December 2009, Shele made an appointment with her lawyer to block him from her millions. She would never make it to that meeting.

Two days later, on New Year’s Eve, Shele was found dead in the bathtub of her Upper West Side apartment. Police ruled it an accident, and Shele’s deeply Orthodox Jewish family quickly buried her without an autopsy on religious grounds. Rod had a clear path to his ex-wife’s fortune, but suspicions about her death lingered. As the two families warred over custody of Shele’s children—and their inheritance— Rod concocted a series of increasingly demented schemes, even plotting to kill his own parents, to secure the treasure. And as investigators closed in, Rod committed a final, desperate act to frame his own daughter for her mother’s death.

Journalists Rebecca Rosenberg and Selim Algar reconstruct the ten years that passed between the day Shele was found dead and the day her killer faced justice in this riveting account of how one man’s irrepressible greed devolved into obsession, manipulation, and murder.

REBECCA ROSENBERG received her master’s degree in journalism from Columbia University. A staff reporter at the New York Post, she currently covers Manhattan Supreme Court. She has been a featured journalist on NBC's "Dateline," CBS's "48 Hours," and the Investigation Discovery network. SELIM ALGAR graduated from U.C. Berkeley and the Columbia University Graduate School of Journalism. He has been a staff reporter at the New York Post since 2005 and covers the New York City Department of Education. His work has appeared in the New York Times, New York Magazine, The San Francisco Examiner, The Austin-American Statesman and NBCSports.com.