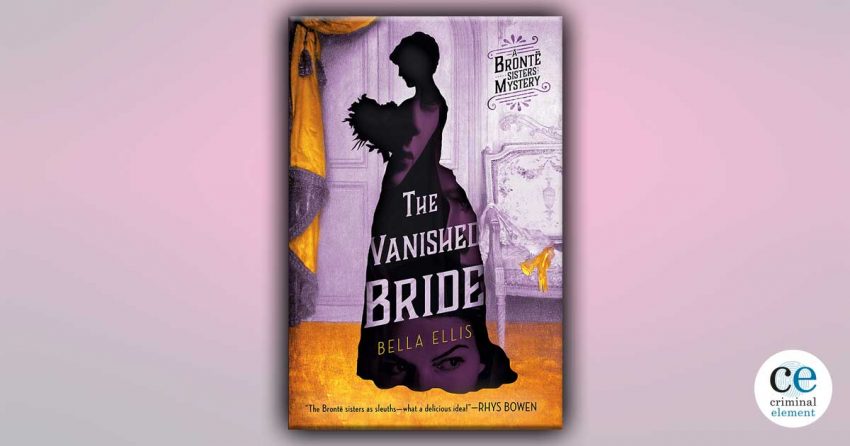 Before they became legendary writers, Charlotte Brontë, Emily Brontë, and Anne Brontë were detectors in this charming historical mystery…

When she pushed the door open, she found the room silent and empty of its occupant and covered in so much blood that she felt she might drown simply by inhaling.

As her eyes adjusted to the light, she could make out that her mistress’s bed was empty, though from the head to the foot it was covered in what looked like one great ink stain spreading outwards from the centre like a monstrous butterfly.

Trembling, breath held, Mattie crossed to the window, where she dragged open the heavy curtains and loosed the window latch to let some of the damp, cold air in, sucking it in desperately. The first thin light of morning cast its veil over the room, and when finally she turned back to the bed, Mattie understood the terrible truth of what she was seeing.

Bella Ellis’ The Vanished Bride wastes no time in getting right into the gothic drama when, on the opening page of the prologue, governess Matilda French finds her mistress’s room awash with blood. From the staggering amount painting the bed, floor, and walls, the conclusion is obvious: the young Mrs. Chester, new wife and mother, has been violently killed.

Word quickly reaches the nearby village of Haworth, where a Reverend Patrick Brontë and his family live: son Branwell and daughters Charlotte, Emily, and Anne.

Charlotte immediately suggests a visit to the unfortunate household, thanks to a childhood friendship with Mattie and a desire to offer what sympathy and assistance they can.

And, as she points out, no one pays any attention to spinsterish daughters of a poor preacher. Perhaps they can uncover just what happened to Elizabeth Chester…

“Is it truly terrible,” Anne said gravely, in a bid to distract her sister, “that I am a little thrilled to think of us as three invisible lady detectors seeking out the truth? I believe we could be quite the only such creatures in all existence.”

“Detectors?” Charlotte asked her. “What a curious phrase.”

“Why yes, from the article in The Times I was telling you about. Detectors—that, my dear sisters, is what we shall be.”

What unfolds is a story that is as much about what happened to the vanished bride as about the inequities women face in the wider world. There’s a subtle—and sometimes outright—undercurrent of rage and frustration from the Brontë sisters, who each get equal space to tell us about their first investigation.

Charlotte, Emily, and Anne have yet to publish the novels and poetry they are now revered for, and are desperate to find a means of supporting themselves that won’t crush their souls.

All three struggle to find happiness, peace, and self-expression in a patriarchal society that places such a high value on reputations and views them as objects, chattel to be protected by their father and brother, too old and poor for marriage and therefore worthless burdens.

And this particular case hits home for them as women; when it lags or becomes confusing, they remind themselves that the work is vitally important:

“But think of that fat baby, and the other quiet child, whatever it was called,” Emily said. “What will become of them if we lose the courage to discover the truth about their father? And what of the first Mrs. Chester, who could only find release is causing her own violent and painful death? Who speaks for her? And if something terrible has happened to Elizabeth, what about her, Charlotte? This is a world where women from every walk of life are used and thrown away once men are done with them; a world where we are required to be ever silent and obedient. Perhaps it is our duty to speak for those who cannot; to voice the silent with our words and make them heard.”

All of the Brontës are brought colorfully to life in ways that ring true with historical fact. Charlotte, author of Jane Eyre, is the romantic of the trio. Emily, who went on to pen Wuthering Heights, is the wild one, theatrical, passionate, and highly imaginative. Anne, the baby of the family and author of Tenant of Wildfell Hall, is practical and the quietest of the trio. Meanwhile, weak-willed brother Branwell is reeling from a romantic indiscretion and drinking away his sorrows.

It’s long been a common gimmick to turn historical figures—Jane Austen, Charles Dickens, Abraham Lincoln, Edgar Allan Poe—into investigators. Sometimes, these stories can be downright disrespectful to their subjects, and The Vanished Bride could have easily been a frothy, disappointing tale that failed to live up to its intriguing heroines.

But thanks to Ellis’ careful layering of historical fact and fiction, plus the feminist substance she imbues the surface mystery with, The Vanished Bride is a satisfyingly solid tale with plenty of fun flourishes, a richly gothic atmosphere, surprising twists, and rewarding Easter eggs for serious Brontë fans.

There are several allusions to events and characters in the sisters’ books, implying that this “real” investigation influenced their later works (one of my favorite details is the suggestion that the sisters used the Bell pseudonym for more than just a penname).

Ellis manages to walk that fine line between deft and overdone as skeletons, ghosts, secret lovers, secret mothers, secret passages, madness, high romance, Romany camps, and thunderstorms make dramatic appearances. Clearly, she had fun playing with the gothic tropes and settings the Brontës are famous for.

And she clearly respects the Brontës themselves. In Bride, they’re vibrant, thinking, feeling women. And Ellis fills the supporting cast with similarly strong, flawed, complex women, as is only fitting with the feminist subplot.

All of the sisters have great moments to shine, but I’ll confess that Emily is far and away my favorite (for all that I prefer Charlotte’s Jane Eyre to her Heights). She certainly gets to have the most fun and excitement—and how can you not love someone like this:

Although Emily had never before broken into the manor house of a suspected murderer in the dead of night, it didn’t occur to her once that this wasn’t something she wouldn’t be perfectly good at.

Whether you’re already a Brontë fan, passionate about gothic fiction, or just a devotee of historical mysteries, The Vanished Bride will satisfy on just about every level. For all of its darkness, it’s often fun and compelling, with powerful characters, solid feminist commentary, and a great—and surprising!—ending. Here’s hoping the lady detectors’ next investigation is as enjoyable as their first.