November 11, 2020
Author Chris Mooney is tired of villains who suck, so he's broken down some of the best villains ever and explains why they are so terrifying.

I grew up on sci-fi films during the eighties and early nineties, and nine times out of ten the villains sucked.

Let me be clear: I’m talking about human villains, not the iconic creatures and robots spawned during that time period like the terrifying xenomorphs from the first two Alien movies, or the T-800 and T-1000 model cyborgs from Terminator. The human villains I’m referring to were most often interchangeable cardboard cutout (and often cartoonish) criminal masterminds and brilliant psychopaths who populated thousands of sci-fi and action movies, TV shows, and books. The original Star Trek series, which I devoured as a kid, pretty much stuck to this villain formula.

The best, most memorable villains are, to paraphrase screenwriter John Truby (who has consulted on more than 1,000 films), exceptionally good at attacking the hero’s greatest weakness, or weaknesses.  Truby calls such a villain “the ultimate antagonist.” The crisis points in the story force the hero to make incredibly difficult decisions that not only reveal the hero’s true nature but also force the hero to face his or her true self. And more often than not, the hero and the antagonist are competing for the same goal.

But how do you accomplish such a feat in an established pop culture behemoth franchise like Star Trek, where beloved and iconic heroes have already been through dozens of life-and-death scenarios by dozens of villains? How can you elevate the story, make it more meaningful and dramatic, when a book or comics reader or audience of a film or TV show knows from the very beginning that the hero and main supporting characters won’t die or get physically harmed in any serious way?

You create the ultimate antagonist.

The second Star Trek movie brought back a well-known villain from one of its classic episodes—Khan Noonien Singh, the genetically-engineered superhuman from “Space Seed.” The movie could have followed a simple connect-the-dots story about revenge, but the writers turned Khan into an antagonist who not only has the upper hand but is also much smarter than Kirk, more prepared. Kirk, who is much older now and feeling his age, his glory days well behind him, is forced by Khan into situations where Kirk makes critical tactical mistakes. Kirk is always struggling, always confronting his limitations and the costs of his mistakes, and each blow Khan delivers forces Kirk to dive deeper into his soul, revealing news aspects of his character. Even better, each of Kirk’s victories feels earned, and when we finally arrive at the end, we see a different James T. Kirk, one who is broken and defeated but is also a bit wiser. He has learned harsh truths about himself. He looks and feels even older and wonders, perhaps, if he is as useless as he feared—a relic from another time.

Sci-fi/fantasy and comic book writers seem to understand this innate need to create interesting, smart, and multi-layered villains. In The Dark Knight, the Joker could easily have been yet another simplistic villain whose sole job is to create mayhem and destruction. Instead, the writers created a Joker who turns Batman’s two greatest strengths—the power he derives from his physical strength and intimidation; his moral code about never killing people—into weaknesses that change the story in dramatic and compelling ways. The Joker doesn’t fear death, and, unlike Batman, has no problem killing—anytime, anywhere. Both are competing for the same goal—the soul of Gotham— which ensures that they will come into direct conflict, again and again, with surprising and unexpected results.

The best villain—the one who had the greatest impact on audiences—is Erik Killmonger from Black Panther. T’Challa, the hero who operates by a strict moral code, is concerned only about the people of Wakanda. Killmonger, who was exiled to America and grew up in poverty, wants to help Black people all over the world. His goal is relatable and for a villain, he’s uniquely sympathetic. His meaningful actions transform T’Challa into a real hero, and in the end, Wakanda is forced to reject its isolationism. Not only that, Kilmonger’s death feels meaningful, which is a new twist in the Marvel universe.

Want to create a story with even greater stakes? Make sure no one is safe—including your hero. In George R.R. Martin’s Game of Thrones, we have a villain, Cersei Lannister, who doesn’t die at the end. In fact, Cersei thrives because, at every turn, she’s more cunning and ruthless than any of her adversaries. (“When you play the game of thrones,” she tells one of the book’s heroes, “you win or you die. There is no middle ground.”). Cersei is an expert at exploiting people’s weaknesses. The main hero, Ned Stark, has an unwavering sense of honor and justice. Cersei knows this, uses it against him, and Ned finds himself locked up, waiting to get his head chopped off in front of a cheering crowd screaming for his blood.

We’re living in a golden age where we’re seeing multi-layered villains—and seeing fresh and exciting takes on well-established heroes across a broad spectrum of mediums from a diversity of creators such as National Book Award-winner Ta-Nehisi Coates’s take on the aforementioned Black Panther as well as Captain America; Academy Award winner Mahershala Ali’s portrayal as the villain Cottonmouth in Netflix’s Luke Cage; the doubles of the Winston family in Jordan Peele’s unnerving horror movie Us; and Monstress and other comics written by bestselling author Marjorie Liu. Diverse and layered storytelling also now extends into videogames, like the brilliant sequel to The Last of Us where, you get to play not only as Ellie, the emotionally-complex hero, but are also forced to play as the equally complex villain, Abby, for such an extended period of time that you begin to understand her and, dare I say, toward the end of this fantastic story, even like her.

Creating the ultimate antagonist was the challenge I set for myself when I wrote Blood World, a story where, in the not-so-distant-future, people called “carriers” have a gene that allows their blood to operate at maximum efficiency. They live longer, are healthier, and look much younger than their actual age. When a regular person—a “non-carrier”—gets a full-body transfusion of carrier blood, mixed with a certain chemical cocktail, the results are amazing—bye-bye fat and wrinkles, hello smooth skin, increased muscle mass, and nearly unlimited energy.

Sebastian Kane is the owner and operator of LA’s most successful blood farm. He abducts kids and teenagers … but only from very poor broken homes. He’s saving them because they’d get snatched anyway. Sebastian treats his carriers as business partners, not cattle. The lives he gives them, albeit inside a gilded cage, are lightyears beyond what they would have experienced in the real world. Sebastian will do anything to protect his carriers, go to any lengths. You might even agree with his decisions.

Or maybe you won’t. But you will understand him, and you will be constantly surprised by the actions he takes. The heroes don’t stand a chance. 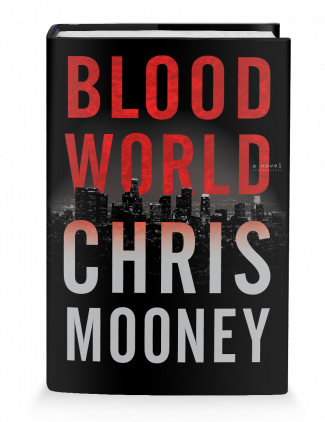 About Blood World by Chris Mooney:

Everything changed when scientists discovered the drug. It looked like the cure for aging, but all progress comes with a price tag. Now, eternal youthfulness will be paid for by the blood of the innocent.

The blood of “carriers” is the most valuable commodity on earth. When treated with a new wonder drug, it cures disease, increases power, and makes the recipient a virtual superman.

It also makes the carriers targets. Young people with the right genes are ripped from their families and stashed in “blood farms.”

Ellie Batista became an LAPD officer specifically to fight this evil as a member of the Blood Squad, but her ambitions are thwarted—until the day she and her partner are ambushed during a routine stop. The resulting events plunge her into an undercover world more dangerous than she could have ever imagined.

Because a madman has found a way to increase the potency of the blood to levels previously unimagined. As he cuts a bloody swath through the already deadly world of blood cartels, Ellie is the only hope to stop him before the body count explodes.

CHRIS MOONEY is the internationally bestselling author of twelve novels, including Blood World (August 18, 2020; Berkley/Penguin Random House). His books have been chosen as a main selection of the International Book of the Month Club, become an instant bestseller in more than thirteen countries, been nominated for an Edgar Award for Best Novel by the Mystery Writer’s Association, sold nearly two million copies and been translated into more than twenty languages. He lives in the Boston area with his wife and son and teaches writing courses at the Harvard Extension School and Summer Writing Program. You can connect with him online at chrismooneybooks.com.