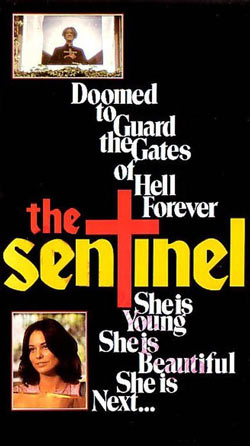 The Sentinel is a movie that evaded me for decades. I love religious horror films like The Omen, The Exorcist, Rosemary's Baby, and most recently This is the End. So I should have loved The Sentinel, with the tagline She's living in the gateway to hell. It also stars many of my favorite actors: Burgess Meredith, Chris Saradon, Eli Wallach, Jerry Orbach, Christopher Walken, John Carradine, and Beverly D'Angelo. The problem is not that it's not terrible, but that it's not terrible enough.

I love a good bad movie, see. The problem is the ones that aren't good enough or bad enough, and just sort of limp along like a dog wiping itself on the carpet for 120 minutes. And that's what The Sentinel felt like. In fact, if a dog ate the famous religious horror films mentioned above, and then wiped itself on a white shag carpet for 120 minutes, it would be easier to watch than The Sentinel.

Let me synopsize the movie for you, and I had to read two different sources to do this, because the direction by Michael Winner (Death Wish, The Mechanic, The Big Sleep '78, but also, tellingly, Won Ton Ton: The Dog Who Saved Hollywood) is so confusing that it often feels like watching disjointed reels with missing footage. But here goes… Alison is a beautiful, neurotic model, as jumpy and delicate as a fawn leaving the forest to live in the big city. The apartment is a bargain, and the real estate agent points out the creepy old blind priest who lives upstairs, looking out the window all day. But yeah, the rent's cheap! So Alison moves in, because she's not ready to marry her boyfriend Michael (Chris Sarandon, in one of his blandest roles), whose previous wife just died a suspicious death. Detective Gatz (Eli Wallach, in a too-brief and lovely scenery-chewing role) is convinced that Michael and Alison murdered her, but that goes nowhere. We see a flashback of poor Alison walking in on her decrepit old father cavorting naked with a roomful of prostitutes, which drives her to attempt suicide. When we meet her, she is so fragile that she faints during a modeling shoot, where the director is played by a young Jerry Orbach. Half of the movie introduces us to the building's other denizens, which include Burgess Meredith at his creepiest, and two other women  (Beverly D'Angelo and Sylvia Miles) who wear leotards and try to entice her into a lesbian love triangle by suddenly molesting themselves at the coffee table in a scene so bizarre that I had to burst out laughing, especially when Alison finishes her tea. Despite this, Alison goes to Meredith's dinner party, where all the grotesque neighbors sit around acting strange, which finally spurs her into action. The next day, she confronts her real estate agent (Ava Gardner) about her wacky neighbors, and we learn that no one else lives in the building but Alison and the priest. This is the shocking moment the whole story hinges upon. Instead of checking into the Milford Plaza, Alison remains in the building, because she's convinced that she's hallucinating it all, because of her past. Now, I don't know about you, but I'm a fan of Richard Pryor's response to finding out he moved into a haunted house. “Well, lovely place. Too bad we can't live here!” As a writer, I know there are ways around this. If Alison was afraid of being committed, she might not talk about it. But one night in the building she sees the ghost of her dead father and stabs it, and collapses in the street covered in blood. I know a nice rent-controlled brownstone is hard to come by in New York, but there are limits! Michael investigates the priest by breaking into a local church office and finding the one file cabinet where they keep the identities of all the priests who have lived in the building.

I wish I were kidding, but that's the beginning and end of the mystery, when he finds that the day one priest dies… another takes his place. But he never makes it to tell Alison, because the scene where he is killed got left on the cutting room floor. (The IMDb synopsis says he was 'secretly killed'. Chandler famously didn't know who killed a character in The Big Sleep, but at least we learned he was killed).

The final night is what the film is best remembered for. Michael Winner hired a gaggle of people with various deformities and congenital defects to wander the hallways, posing as demons breaking through the gates of hell. It makes for some creepy stills of Burgess Meredith among them like the ringmaster of a freak show, and Michael's return as a demon—apparently he did kill his wife—is meant to drive Alison to suicide. In the end, John Carradine and another priest bumble downstairs with a big brass cross and hand it off to Alison, who goes blind and becomes the next Sentinel, guarding the building by um, sitting upstairs at the window, until she gets old and the church rents out the apartment to the next one.

The movie suffers from a great concept and terrible execution. It explains too much in some spots, and not enough in others. Just declaring a tony downtown address “the gate to hell” isn't very compelling. And the cast has very little to do. Cristina Raines, who plays Alison, is about as bland as angel food cake and all the lurid shots of topless demons don't spice up a boring film with a one-trick-pony ending.

Written by novelist and screenwriter Jeffrey Konvitz, the man who brought us GORP (a summer camp 'romp' which involves such pranks as putting pork in the kosher food) I might hunt down a copy of the novel to see if it's any better. He wrote two sequels, The Guardian and The Apocalypse. I had high hopes for this one, but it let me down. Next time I'll just watch Evilspeak again. That one has Clint Howard summoning demons with his computer, and a swordfight in a church. It's practically cinematic gold compared to The Sentinel.