The Outside Man by Don Bentley: New Excerpt

March 2, 2021
The fight for freedom has sent Matt Drake to some of the world's most dangerous spots. This time the war is coming to his front door. Read on for a new excerpt from Don Bentley's The Outside Man. 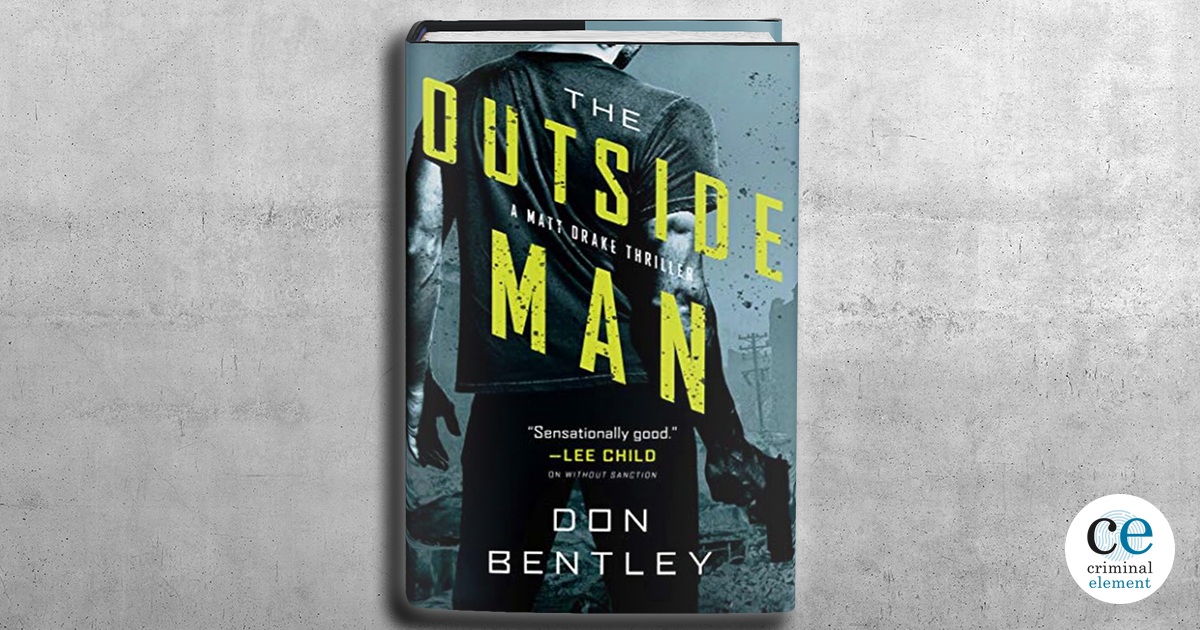 In my line of work, training is great, but nothing beats experience. As the two SUVs careened toward me, my experience in shitholes the world over allowed me to process several things at once: One, my Glock’s slide had locked to the rear, revealing an empty chamber. Two, my spare magazine was in the truck’s glove box, which meant, at this moment, it might as well have been on the other side of the earth. Three, the two vehicles driving against traffic on opposing sides of the street were probably not on the side of the angels.

The assassin’s help had just arrived, and I was outgunned, outmanned, and out of ammunition.

In other words, just another day at the office.

Vaulting off the Honda’s hood, I landed next to the fallen police officer as squealing brakes and opening car doors announced the arrival of bad-guy reinforcements. The cop was a big un, probably tipping the scale north of two twenty-five with all of his gear. Dropping my pistol, I hooked both hands through the fabric loop at the top of his tactical vest and began dragging him toward my truck to the accompanying pop, pop, pop of multiple suppressed weapons firing on automatic.

Rounds snapped past my head like rabid hornets, but I kept pumping my legs until a ricochet slammed into my right calf muscle, causing an instant charley horse. Thanks to equal parts adrenaline and grit, I finished dragging the cop behind my truck’s front tire. Then physics took over. I collapsed next to the ninja mom and her toddler, working the cramp from my leg. Once again, her eyes widened at my unexpected appearance, but this time she didn’t try to punch me.

Things were looking up.

“I thought you were ending this,” she said as my truck rocked under the onslaught of automatic weapons fire.

“Working on it,” I said, reaching to unholster the cop’s pistol.

Like many law enforcement officers, this cop seemed to believe that bigger was better. He was wearing a customized Springfield 1911. It was an extremely accurate pistol chambered in a manstopping .45 caliber, but it held only seven rounds in its single-stack magazine, plus one in the chamber. This was a problem. In gunfights with multiple opponents, more bullets were always better.

Still, a Springfield .45 with eight rounds was a hell of a lot better than a Glock with zero. Squeezing the checkered walnut grip with both hands, I leaned against the truck’s frame and popped up to have a look.

What I saw took the proverbial wind out of my sails.

Two teams of two shooters were advancing toward me with textbook precision. The gunmen were working the street from opposite sides, one member of each team advancing while his partner laid down suppressive fire in short, controlled bursts.

These guys knew their business.

Score one for the good guys.

Unfortunately, that single engagement had also cost me half my ammunition.

Ducking behind the truck’s hood, I reached for the leather magazine holders attached to the cop’s patrol belt and then stopped mid-motion as my eyes settled on the radio attached to his chest.

Goddamn it, but I was smarter than this.

Ripping the radio from the cop’s bloody shirt, I smashed the transmit button.

I released the transmit button, and the radio exploded with voices. Voices I didn’t have time to answer. Instead, I grabbed two magazines from the cop’s belt, combat- reloaded the Springfield, and popped back over the hood.

The team of four shooters was now even with the gunman’s Honda. As police sirens wailed, one of the men freed the dead shooter from the car. The second tossed something about the size of a Coke can into the backseat.

My sudden appearance brought another onslaught of bullets from the shooters pulling security, sending me diving to the pavement. Leaning on my side, I stretched past the front tire, edging around the bumper. My front sight post found one of the gunmen. I snapped off one shot and was in the process of firing a second when the Honda exploded.

The concussion smashed me into the ground just as a hubcap scythed past my face in a blur of steel. Grabbing onto the bumper for support, I hauled myself into a seated position as the hit team moved back in short, disciplined bounds.

The professional part of me admired the team’s tactical soundness. Their break-contact maneuver was textbook, like something out of the movie Heat. I was still alive only because of the legion of converging police sirens. A few minutes more and the team would have flanked me. I know that some folks claim that it’s better to be lucky than good, but I’ll take an M4 equipped with EoTech reflex site and a tactical harness full of spare magazines luck any day.

Which was exactly what the cop who the building on foot was carrying.

Excerpted from The Outside Man by Don Bentley, published by Berkley, an imprint of Penguin Publishing Group, a division of Penguin Random House, LLC. Copyright © 2021