The Old West: A New Frontier in Crime Fiction

Read Terrence McCauley's take on the Western genre as fertile ground for crime fiction, then make sure you're signed in and comment below for a chance to win a copy of Where the Bullets Fly! 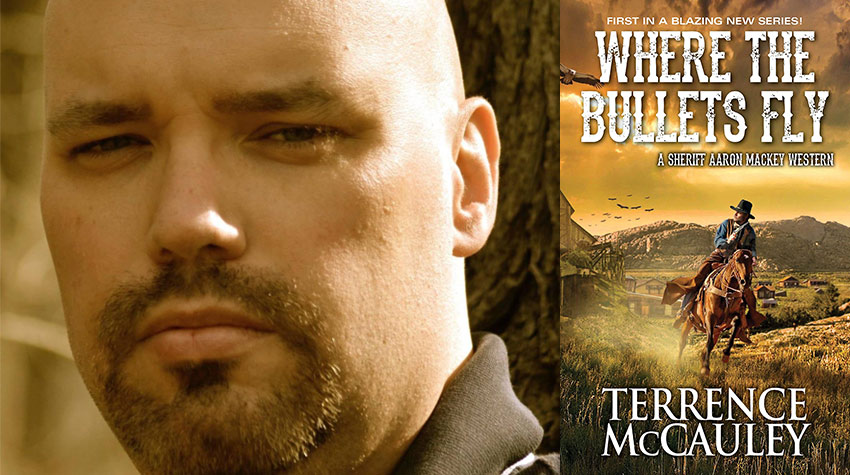 I know what you’re thinking. There’s absolutely no way in the world anyone in their right mind could consider historic Westerns to be crime fiction. Modern tales set in the West are okay—such as the consistently fine work turned in by the likes of Craig Johnson, C.J. Box, Tony Hillerman, and others—but certainly not sagebrush and spurs Westerns set in the 1800s, right?

Don’t be so sure.

I don’t necessarily blame people for their misconceptions of the historical Western. One could be forgiven for recalling the tawdry images of cheap dime novels with salacious covers of half-naked women gripped by cowboys or blood-thirsty Native Americans about to prey on settlers. Tired tropes of lone sheriffs squaring off against bad men while townspeople cower in fear come to mind, as do dated portrayals of Native Americans, Mexicans, and other ethnic minorities who were treated horribly during America’s westward expansion.

It’s easy to turn up one’s nose at anyone continuing to write “cowboys and Indians stuff,” as someone did at a recent writer’s convention when I mentioned my foray into Westerns. In many ways, the genre shot itself in the foot by flooding the market with predictable plots and cardboard characters for decades. The mystery/thriller genre has suffered from a similar lack of originality, but a modern setting combined with better marketing has effectively hidden this slippage in quality.

But a cursory look at the Western genre will show that it is far more diverse than most people give it credit. I had the pleasure of attending the Western Writers of America Conference in Billings, Montana, earlier this summer and found myself floored by the number of topics eligible for the Silver Spur Awards. Individual categories included Historical Novels, Contemporary Novels, Mass Market Paperbacks, Romance, Traditional Novels, Biographies, Contemporary Nonfiction, Historical Nonfiction, Juvenile Fiction and Nonfiction, and Short Fiction.

As impressive as the range of categories may have been, it was nothing compared to the diverse creative heritage of the organization. Edna Ferber wrote classics like the novels Giant and Cimarron. Elmore Leonard got his start writing Westerns. Richard Matheson wrote many acclaimed novels in various genres and wrote a fair amount of Westerns. Robert B. Parker also tried his hand at the genre with his acclaimed Hitch/Cole series. Cormac McCarthy, Loren Estleman, and David Morrell have written Westerns too. The influence of the genre on the Gunslinger character from Stephen King’s Dark Tower series cannot be overlooked.

Why has the historical Western been able to attract so many writers who have had success in other genres, particularly in crime writing? The answer is simple. The era of our country’s expansion is still fertile ground for those looking to tell a great story. It affords a writer the ability to explore the rawest forms of the human condition—greed and benevolence, anger and love, bravery and cowardice—all far away from the Victorian comforts back east and across the Atlantic in Europe. The historic West shows people living on a knife’s edge, facing death at every turn—be it from nature, fate, or their fellow human beings of varying origin and culture. It is a time when old worlds clashed with new; when modernity trampled everything in its path.

In short, the Old West is an era ripe for crime fiction. Whereas Sherlock Holmes had his deerstalker cap and magnifying glass in the cozy confines of Baker Street, the American lawman of the same era had to be able to read a trail as well as he could read a suspect in a murder or an attack. Good people had to stand against the bad to protect all they held dear against those who wished to do them harm. Greed and ambition led people to break the law, which forced their victims to seek justice in one form or another. The motivations of the characters of a modern crime novel are the same as those in a historic Western. The only difference is the setting.

I know some of you might still be skeptical about the depth of possible storylines set in this time period. I’ll admit, I had the same reservations when I began writing this piece. But I was fortunate to receive the latest edition of Roundup Magazine from the Western Writers of America, wherein there was an excellent article about this very topic written by Win Blevins. Titled “The Unwritten West: Broadening the Scopes of Stories,” Mr. Blevins highlights several unexplored points of view one might explore should they decide to write about the West. Among them were stories set among the Native American tribes, both before and after the United States began to encroach on their land; the French-Canadian trappers and traders, who were true pioneers ahead of their time and faced untold adventure and danger; Californios who prospered for generations under Mexican rule only to be disenfranchised by American expansion; miners who came west seeking riches only to find ruin instead; Mormons who fought religious persecution as they sought a place where they could worship their own God in their own way; and, finally, the Chinese whose contributions and tribulations in the settlement of the West cannot be diminished.

I found a quote from Elizabeth George that I believe fits the premise of this article. “If you don’t understand that story is character and not just idea, you will not be able to breathe life into even the most intriguing flash of inspiration.”

That is why I believe those who discount the viability or appeal of historical Westerns do so at their own peril. Don’t let the setting fool or intimidate you. There is a wealth of great crime stories that have been set in the West. I firmly believe there are even greater stories yet to be told from different points of view. The only question is our courage to tell them.

Comment below for a chance to win a copy of Where the Bullets Fly by Terrence McCauley!

Where the Bullets Fly Comment Sweepstakes: NO PURCHASE NECESSARY TO ENTER OR WIN.  A purchase does not improve your chances of winning.  Sweepstakes open to legal residents of 50 United States, D.C., and Canada (excluding Quebec), who are 18 years or older as of the date of entry.  To enter, complete the “Post a Comment” entry at https://www.criminalelement.com/the-old-west-a-new-frontier-in-crime-fiction-comment-sweepstakes beginning at 1:00 p.m. Eastern Time (ET) September 17, 2018. Sweepstakes ends at 12:59 p.m. ET September 25, 2018. Void outside the United States and Canada and where prohibited by law. Please see full details and official rules here. Sponsor: Macmillan, 175 Fifth Ave., New York, NY 10010.

Terrence P. McCauley is an award-winning writer of crime fiction and thrillers. He is the author of the James Hicks series, which include: The Fairfax Incident, A Conspiracy of Ravens, A Murder of Crows and Sympathy for the Devil, published by Polis Books. He has also written two award-winning novels set in 1930 New York City – Prohibition and Slow Burn.