The Coen Brother’s 1998 comedy The Big Lebowski has many cultural touchstones—the sixties, hippies, Vietnam, CCR, weed, Busby Berkley musicals—but the underlying structure of the movie goes back further to the days of 40s film noir. In a movie full of touches of genius (full disclosure: I’m a Lebowskiphile from way back), the initiating act of genius was the decision to make the film a modern day update of the hardboiled L.A. crime story. Of course, the Coens were well aware that Robert Altman did this back in the seventies when he brought Raymond Chandler’s Phillip Marlowe to the grimy, drugged-out LA of 1973 in The Long Goodbye. The Coens did Altman one better by celebrating/satirizing/sending-up every noir trope they can get their hands on.

Here then is a noir geek’s guide to the land of Lebowski:

1. The Big Lebowski, The Title: In the film itself, “The Big Lebowski” refers to the character played David Huddleston, the rich old man who hires “The Dude” to find his missing wife. The title, however, is a throwback to The Big Sleep, Raymond Chandler’s novel about a rich old man who hires private eye Philip Marlowe to find his missing son-in-law. It’s evocative, too, of other noir titles like The Big Bluff, The Big Combo, and The Big Heat.

2. The Big Lebowski, The Guy: The obvious reference point here is the character of rich old General Sternwood in The Big Sleep—another grumpy guy in a wheelchair—but there’s also Mr. Grayle, the rich old guy married to a younger trophy wife, in Murder My Sweet (based on Farewell My Lovely).

3. The Known Pornographer: The character of “beaver picture” producer Jackie Treehorn played by the great Ben Gazarra is a callback to stroke mag publisher Arthur Gwynn Geiger in The Big Sleep.

6. The Spiked Drink: In Lebowski, our hero is drugged with a spiked drink. This is a direct call back to Sam Spade getting drugged in The Maltese Falcon. The Dude’s subsequent trippy dream has its counterpoint in Marlowe’s drug induced nightmare in Murder My Sweet.

7. The Tail Job: In Lebowski, the Dude is followed by a “fellow shamus” played by Coen regular Jon Polito. In The Big Sleep, Marlowe is tailed by noir regular Elisha Cook Jr. 8. The Little Guy and The Big Lug: Speaking of Cook, I’ve always suspected that the Dude’s two sidekicks—small, timid Donnie (Steve Buscemi) and big, lumbering Walter (John Goodman)—are basically playing the roles that Elisha Cook and Murder My Sweet’s Mike Mazurki would have played back in 1945.

9. The Ass Kicking: The Dude, like Marlowe and many a detective after him, spends half his time getting beaten up and pushed around by muscle-bound goons. 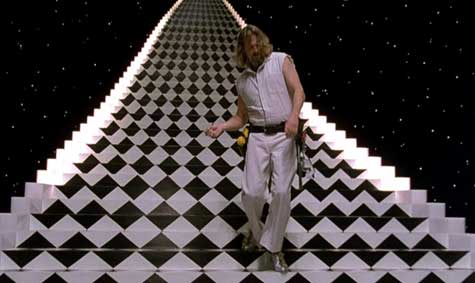 11. The Powell Connection: I’m not going to claim this one as a direct inspiration, but could the fact that the Dude dreams his way into a Busby Berklee musical number have anything to do with the fact that Murder My Sweet’s Philip Marlowe is played by Dick Powell, who was a star of Busby Berkley musicals? I don’t know if the Coens intended that as a reference, but I like to think there’s a connection on some other metaphysical plane. The Dude would know what I’m talking about.

12. The Bowling Alley: Here’s another thing that’s likely not a direct homage, but is an interesting tidbit for noir geeks to consider. The Dude, played by Jeff Bridges, hangs out in a bowling alley. In the brilliant 1950 film noir The Sound of Fury, Jeff’s father Lloyd Bridges plays a ne’er-do-well who spends his leisure time hanging out in a bowling alley. Added Bridges noir trivia: Jeff Bridges made his first film appearance—at the ripe old age of six months old—as a baby in the 1951 film noir The Company She Keeps. Extra Added Bridges noir trivia: The Company She Keeps starred Jane Greer, who starred in the noir masterpiece Out of the Past. Jeff Bridges starred in Against All Odds, a remake of Out of the Past that featured Jane Greer in a supporting role.

13. The Big Nothing: In some ways, the most important noir element of The Big Lebowski isn’t a specific reference or homage, it’s the utter meaninglessness at the bottom of everything that happens in the course of the film. The hardboiled detective tends to go about his labors like Sisyphus rolling his rock up the hill only to see it roll back down again. By the time Lebowski has run its course, much has happened but none of it seems to really meaning anything. Donnie is dead and Dude and Walter go bowling. The meaning of nothingness is, really, the central theme of most Coen Brothers films—whether played for dark laughs in Burn After Reading or played deadly serious in No Country For Old Men. You can see it in their first film, the neo-noir Blood Simple, and you can see it beneath the surface of their biggest commercial hit True Grit. Maybe the reason that The Big Lebowski is such a cult sensation is that it was able to capture this incredibly bleak idea in a way that’s goofy and light and funny as hell.