December 12, 2019
As the Bard wrote, "One man in his time plays many parts..." Join Emily Littlejohn, author of acclaimed debut Inherit the Bones and upcoming novel Shatter the Night as she explores how several of Shakespeare's plays continue to inspire crime writers today.

**BONUS: Log-in and comment on this post to enter for a chance to win a copy of Shatter the Night, the fourth book featuring Colorado police officer Gemma Monroe.

Though it has been over four hundred years since William Shakespeare’s death, his works continue to inspire new generations of authors. There’s just something about the Bard, isn’t there? The tragic love of Romeo and Juliet, the darkness of King Lear’s psyche . . . Shakespeare’s plays and sonnets are rife with possibilities for retelling and retooling, especially in the arena of crime fiction.

In Shatter the Night, the fourth book in my Detective Gemma Monroe Mystery Series, Monroe investigates a series of murders that may or may not have ties to an upcoming production of Macbeth at the recently renovated fictional theater The Shotgun Playhouse. In addition, Monroe’s colleague and good friend, Dr. Ravi Hussen, is noted for her almost encyclopedic knowledge of Shakespeare and frequently quotes the Bard, often at the scene of a crime.

Interestingly enough, the play Macbeth, believed to be Shakespeare’s twenty-ninth, is itself shrouded in mystery; it is believed to be highly cursed. According to legend, death, disease, and disaster have followed many productions of Macbeth over the last few centuries. In fact, many theater companies who take it on follow long-standing superstitions, such as refusing to state the play’s title within a theater unless it is done specifically as part of reading lines.

I’m not the only author, of course, who’s looked to Shakespeare for inspiration. Alan Gratz, Josephine Tey, Faye Kellerman, and Jo Nesbo are just a few writers among dozens, possibly hundreds, who’ve found success in retelling and reimagining the Great One’s stories.

Q&A with Emily Littlejohn, Author of Inherit the Bones

Alan Gratz’s excellent Horatio Wilkes Mysteries feature high school junior Horatio Wilkes as an unlikely detective solving mysteries in Something Rotten and its sequel, Something Wicked. The two novels, inspired by Hamlet and Macbeth, were written for young adults but will appeal to anyone looking for a good read. Both books won numerous awards and here’s to hoping that a third in the series may be published one of these days.

While Gratz’s books are full of action and adventure, Josephine Tey’s bestselling novel Daughter of Time takes on a decidedly more . . . subdued approach. After all, her hero, Inspector Grant, is bedridden with a leg injury for the entire story. The novel, written in 1951 and the fourth in a series, features Grant journeying down a rabbit hole of research in an attempt to uncover the truth about Richard III; was the king the nephew-killer he’s been portrayed as? Or an innocent man, misrepresented in the history books?

Faye Kellerman’s The Quality of Mercy takes an innovative approach: she features Will Shakespeare as a character in the story. Shakespeare, along with heroine Rebecca Lopez, finds himself caught up in a tale of intrigue set in London during the reign of Queen Elizabeth. An inventive and clever story, Mercy is a departure from Kellerman’s usual thrillers though no less enjoyable.

Noir mystery fanatics will be familiar with Jo Nesbo; the Norwegian novelist’s thrillers have been translated into dozens of languages across the globe. Nesbo locates his Macbeth in an unnamed city in Scotland in the early 1970s. The story’s themes of addiction, ambition, and the violence of gang warfare make Nesbo’s novel just as appealing as the original play.

Shakespeare wrote “ . . . and one man in his time plays many parts” in As You Like It. If the above bibliography is any indication, I’d say Shakespeare himself played—and continues to play—many, many parts, including muse to authors around the world. 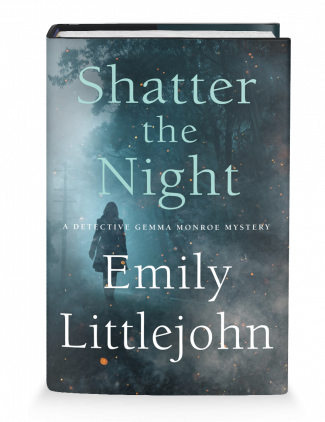 About Shatter the Night by Emily Littlejohn:

It’s Halloween night in Cedar Valley. During the town’s annual festival, Detective Gemma Monroe takes a break from trick or treating with her family to visit an old family friend, retired Judge Caleb Montgomery, at his law office. To Gemma’s surprise, Caleb seems worried—haunted, even—and confides in her that he’s been receiving anonymous threats. Shortly after, as Gemma strolls back to her car, an explosion at Caleb’s office shatters the night.

Reeling from the shock, Gemma and her team begin eliminating suspects and motives, but more keep appearing in their place, and soon another man is killed. Her investigation takes her from a chilling encounter with a convicted murderer at the Belle Vista Penitentiary, to the gilded rooms of the renovated Shotgun Playhouse, where Shakespeare’s cursed play Macbeth is set to open in a few weeks.

Yet most disturbing of all is when Gemma realizes that similar murders have happened before. There is a copycat killer at play, and if Gemma can’t stop him, he’ll carry out his final, deadly act.

Comment below for a chance to win a copy of Shatter the Night by Emily Littlejohn!

Shatter the Night Comment Sweepstakes: NO PURCHASE NECESSARY TO ENTER OR WIN.  A purchase does not improve your chances of winning.  Sweepstakes open to legal residents of 50 United States, D.C., and Canada (excluding Quebec), who are 18 years or older as of the date of entry.  To enter, complete the “Post a Comment” entry at https://www.criminalelement.com/the-mystery-endureth/ beginning at 12:00 a.m. Eastern Time (ET) December 12, 2019. Sweepstakes ends at 11:59 p.m. ET December 26, 2019. Void outside the United States and Canada and where prohibited by law. Please see full details and official rules here. Sponsor: Macmillan, 120 Broadway, New York, NY 10010.

Emily Littlejohn writes the Gemma Monroe Mysteries series, set in the lovely but deadly fictional town of Cedar Valley, Colorado. Her debut novel, Inherit the Bones, was a Colorado Book Award Finalist. She lives along the Front Range with her growing family, enjoying the beautiful outdoors as much as possible. She is currently at work on the fourth book in the series, Shatter the Night.