April 7, 2021
Ellen Crosby, author of The French Paradox, the latest installment in the Wine Country Mystery series, writes about the continuing interest in Jacqueline Kennedy Onassis, who plays a role in her new mystery.

Jacqueline Kennedy Onassis, one of the most glamorous and fiercely private women of the twentieth century, spent more than thirty years as a regular visitor to the small village of Middleburg, Virginia because she loved foxhunting and horseback riding—but mostly because no one fussed over her or made a big deal when she was there. I knew sooner or later I would write about Jackie since my wine country mysteries are set in Middleburg—and so she appears in The French Paradox, my new book, where her career as a book editor and a long-ago romance I invented during her junior year in Paris in 1949 are woven into the plot.

As these things happen, I am not the only author currently writing about Jackie: Louis Bayard and Ann Mah, two friends and fellow mystery authors, are also working on Jackie novels. Lou’s book, tentatively titled Me and Jackie, is the story of the courtship of Jacqueline Bouvier and John F. Kennedy. Ann’s yet-to-be-published book, Jacqueline in Paris, is a fictionalized account of Jackie’s junior year in Paris and is based on an article she wrote in 2019 for the travel section of The New York Times. (That article was enormously helpful for my research).

Lately I have been wondering why three of us would write about Jackie. At the same time. She was First Lady sixty years ago. She died twenty-five years ago. What made her so intriguing that it lured Ann, Lou, and me to spend a chunk of our lives writing stories about Jackie that we made up?

Ann wrote that while she admired Jackie, she didn’t share the fascination others—like me—had for her. Instead she wanted to write about post-war Paris: “Many biographers have painted that year, 1949-1950, as one of glamour, and nightclubs, and society balls, but the truth is she [Jackie] was a student with cold feet living under post-war rations, traveling third class, awestruck by Europe.” Lou wrote that he admired Jackie’s moxie as a career woman in the 1950s when most women her age were worried about getting married: “As the Inquiring Camera Girl for the Washington Times-Herald, she held down a six-day-a-week job, buttonholed strangers in the street, wrote and edited her own copy, developed her own photographs.”

As for my reasons—and I am old enough to remember the day JFK was shot—an article titled “A lost couple—and era of fame” written in 2019 by Robin Givhan, fashion editor of The Washington Post, on the twentieth anniversary of the death of JFK, Jr. and his wife Carolyn Bessette sums up my fascination with Jackie. “The couple died before the era of Instagram and Twitter, back when personal lives were something that people still sought to protect rather than curate and monetize . . . they died when personal lives seemed real and fragile, something wondrous and precious that could easily be disrupted and, once lost, could never be regained.”

These things John F. Kennedy, Jr. learned from his mother.

My own memories of Jackie, especially when she was living in New York and working as a book editor at Viking and Doubleday, (she was also friends with my mother-in-law) are of a woman who hid behind enormous sunglasses, so zealously shunning the limelight she was known for ending friendships after someone blabbed about her and it wound up in the media. Robin Givhan wrote that Jackie’s quest for privacy, especially her unhappiness with the paparazzi’s intrusiveness in her life, was much discussed when she died in 1994, reached a fever pitch when Diana was killed in 1997, but “became quaint and vaguely obsolete” after JFK, Jr. and his wife died in 1999 when the plane he was piloting crashed into the Atlantic Ocean near Nantucket Island.

As a former journalist who freelanced for The Washington Post a few years later, I remember how careful and diligent I was to check and double-check any piece of information about someone’s personal life that ended up in my stories. Because, as Givhan said, once you let the genie out of the bottle, you can’t stuff him back in. These days we can’t know enough about the most intimate, revealing details of the lives of celebrities, politicians, and “influencers”—many of whom are happy to stage-manage doling it out for us or letting us see their perfect lives on Instagram.

Robin Givhan added: “In hindsight it’s as though Mr. and Mrs. Kennedy were holding back the impending tide of celebrity excess: the costly haute couture, the personal branding, the competitive public confessionals, the grotesqueness of it all.”

“Like so many icons, Jackie emanated a deep and insoluble mystery,” Lou Bayard wrote. “You can look into those eyes a million times and never feel any closer to knowing what’s going on behind them. Which, of course, is why you keep looking.”

In the final scene in The French Paradox, Lucie Montgomery and her grandfather have a heart-to-heart talk about why he kept his affair with Jackie a secret for seventy years and why he still wants to continue to respect her privacy. He also tells Lucie something Ted Kennedy, Jackie’s brother-in-law, said at her funeral that he believes described her perfectly: “Jackie would have preferred to be just herself, but the world wanted her to be a legend, too.” 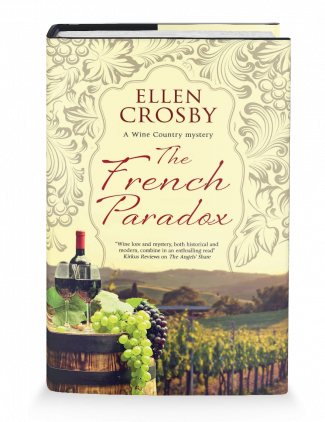 About The French Paradox by Ellen Crosby:

Seventy years later, Cricket Delacroix, Lucie’s neighbor and Jackie’s schoolfriend, is donating the now priceless paintings to a Washington, DC museum. And Lucie’s grandfather is flying to Virginia for Cricket’s 90th birthday party, hosted by her daughter Harriet. A washed-up journalist, Harriet is rewriting a manuscript Jackie left behind about Marie-Antoinette and her portraitist. She’s also adding tell-all details about Jackie, sure to make the book a bestseller.

Then on the eve of the party a world-famous landscape designer who also knew Jackie is found dead in Lucie’s vineyard. Did someone make good on the death threats he’d received because of his controversial book on climate change? Or was his murder tied to Jackie, the paintings, and Lucie’s beloved grandfather?