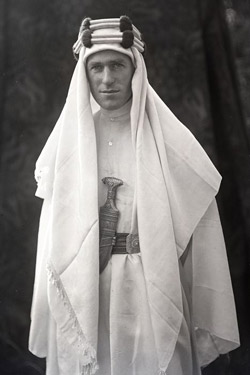 He was a small man, only 5-foot-5, but he cast a shadow that stretched across the Arabian peninsula.  Dressed in the thobe and ghoutra of an Arab sheikh, he banded together the Arab tribes and led his Bedouin raiders across the desert that had never been crossed, the Nafud, to assault the landward side of Aqaba, a World War I Turkish stronghold. And, after that stunning achievement, with the aid of the British army, he took his ragtag Bedouin force and launched a guerilla campaign that cost the Turks precious manpower and equipment.

His name was Thomas Edward Lawrence, better known now as “Lawrence of Arabia.” But was his death in May 1935 a tragic motorcycle accident or a carefully planned political assassination?

T.E. Lawrence was born in 1888, one of five boys born to Sir Thomas Chapman and Sarah Junner, a governess to Chapman’s first family. Although the pair never married, Chapman, who adopted the name Lawrence, left his first wife and lived with Junner. Eventually the family settled in Oxford, where the younger Lawrence studied history and archaeology.

By 1912, he had become an archaeologist, working in the Middle East with famed scholars Leonard Woolley and David George Hogarth. It was at this time that Lawrence learned Arabic and became enchanted by Arab culture. This also was when he had his first exposure to covert operations, for Woolley’s and Lawrence’s dig was used as cover for a military survey of the Negev Desert.

Lawrence had been commissioned through officer’s training in a program associated with Oxford. When World War I erupted in 1914, he was assigned to the Arab Bureau under his former professor, D.G. Hogarth. Eventually, he was attached to Sheikh Faisal, son of Hussein bin Ali, Sharif of Mecca. Faisal was an Arab nationalist, as was Lawrence. This partnership succeeded in making the Arab Revolt against the Turks, during World War I, a resounding success. And Lawrence of Arabia became world famous.

Disillusioned by the partitioning of Arabia after the war, Lawrence, by then a lieutenant colonel, retired to private life, writing two versions of the history of the Arab Revolt. But he became bored with retirement and, in 1923, enlisted in the Royal Air Force as a mechanic, under the name John Hume Ross. Later, in 1925, he enlisted in the Royal Tank Corps as T.E. Shaw. Dissatisfied with the tank corps, he attempted to return to the RAF several times, finally receiving permission to rejoin in 1926. His tenure in the RAF was plagued by accusations that he was involved in espionage, especially during a posting to India, but he remained in the service until 1935, about two months before his death near Bovington Camp in Dorset.

On May 13, 1935, Lawrence was out riding his motorcycle near Clouds Hill, his cottage close to Wareham. According to the official version of the story, he came to a dip in the road. As he rode up the rise, he found himself about to hit two boys on bicycles. Swerving, he lost control and was flipped over the handlebars of his motorcycle, sustaining a mortal head wound, but not without clipping one of the boys.

Lawrence died six days later: May 19, 1935. An inquest was held at Bovington Camp, and Lawrence was buried in a local graveyard.

Almost immediately, rumors cropped up of a mysterious black car that ran Lawrence off the road. And shadowy sources alleged that Lawrence was killed by MI-5 on the orders of Winston Churchill. Rumors are wonderful things.  They can be born out of thin air and take on lives of their own. But that doesn’t seem to be the case with Lawrence.

Dorset historian Rodney Legg and Lawrence biographer Desmond Stewart both believed that Lawrence was assassinated. Four witnesses stated that they saw the mysterious black car: the two children who were involved in the incident;  a man in a delivery van;  and a soldier, one Private Catchpole, who happened to be in a nearby field. The children were kept incommunicado in a hospital and did not testify at the inquest, which was conducted, oddly enough, at Bovington Camp, and controlled by MI-5 rather than the local police. Catchpole did testify about the black car, but he, conveniently, killed himself shortly thereafter. The inquest was held in the morning; Lawrence was buried the same afternoon.

But why? Why would Lawrence be considered a threat?

The answer has to do with his political leanings. Around the time of his death,  Lawrence was aligning himself with Sir Oswald Moseley, leader of the British Union of Fascists. And when he sustained the injuries that led to his death, Lawrence had been on his way to see his good friend, Hawthornden Prize winner Henry Williamson, who was facilitating a meeting between Lawrence and Adolph Hitler.  Lawrence, like other veterans of World War I, abhorred the idea of yet another war in Europe, and, like Moseley and Williamson, saw dialogue with Hitler as a necessary first step to preventing it.

In 1935, Lawrence was still a national hero. Moseley advocated peace, but there was an active war lobby in England. It is thought that Lawrence was about to publicly embrace the peace movement. This would have been very embarrassing to the war lobby.

At this far a remove, it would be difficult to prove Lawrence’s fatal injuries were other than accidental, but the circumstantial evidence is considerable.  Forensic examination in this instance would provide little. It doesn’t take a political historian to realize that the recruitment of a national figure like Lawrence would have boosted Moseley’s movement. But only the release of information from MI-5 and the British government could potentially shed any light on the circumstances of the accident, and that is highly unlikely to happen. Like much of his life, the details of T.E. Lawrence’s death will remain in the shadows.

See these and other excellent photos at The Life of T.E. Lawrence tmblr.