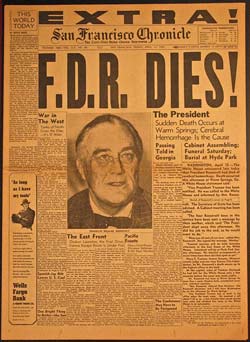 In April 1945, the end of World War II was finally in sight. Franklin Delano Roosevelt, recently elected to an unprecedented fourth term as president, was at his Warm Springs, Georgia, retreat, sitting for a painting. He reminded the artist that she only had 15 more minutes to work, then complained of a sudden, blinding headache, lost consciousness, and died.

Quite frankly, even someone as suspicious as I would have bought that story, hook, line, and sinker. Roosevelt had been in bad health for years, after a bout with polio left him dependent upon crutches or a wheelchair. The doctors, seeing no real need for an autopsy, decided that it must have been a cerebral hemorrhage.

And so, FDR was buried and Harry S. Truman became president.

People think that conspiracy theories have come into their own only during the Internet age. But within four years of Roosevelt’s demise, a book titled The Strange Death of Franklin D. Roosevelt was published. And while speculation about Roosevelt’s death has remained in the background, over the years it has continued to be one of the most persistent conspiracy theories out there. Even the infamous Colonel X of Oliver Stone’s JFK, L. Fletcher Prouty, has weighed in on the question. So there it is: was Roosevelt murdered or did he die by natural causes?

The fact of the matter is that all presidents accumulate enemies, and a man who succeeded in winning four elections can be assumed to have accumulated far more than most. President Barack Obama is said to average more than 10,000 death threats a year. Even the relatively benign Dwight Eisenhower is reported to have received more than 15,000 such threats annually. And Roosevelt’s views in certain areas were likely to have created even more enemies for him. For instance, he:

Just those positions alone would have painted a bull’s-eye on him several times over. Yes, FDR had his share of enemies, but could he have been murdered? What do those who buy into this idea hang their hats on? Mostly, the “evidence” consists of allegations that cannot, today, be proven without exhuming Roosevelt’s body and conducting a full forensic examination. His last breakfast was supposedly laced with cyanide. His body turned black within hours of his death, an alleged result of arsenic poisoning. Although Georgia law demanded an autopsy, as in the case of JFK twenty years later, Roosevelt’s body was whisked out of the state without the legally mandated autopsy by state officials. That’s not an unsubstantiated allegation; that did happen. But that it was done for some nefarious reason is unsubstantiated.

The suspects are fascinating as well. Bill Hanson, in his book Closely Guarded Secrets, lays blame on the Nazis. Colonel Prouty says that Stalin advised presidential son Elliott Roosevelt that the “Churchill gang” had his father murdered, because they were afraid FDR’s postwar plans would destroy British influence around the globe. This was accomplished by a program of poisoning begun at the famous Yalta Conference and perhaps continued at Warm Springs. Emanuel Josephson, author of The Strange Death of Franklin D. Roosevelt, points out that one of Roosevelt’s closest aides, General Edwin Watson, became suddenly ill and died on the return from Yalta, the implication being that he had been poisoned as well.

It is easy to make these claims, but difficult to back them up at this late date.  That Roosevelt’s body turned black within hours of his death could be indicative of a number of conditions. People with circulatory problems sometimes turn dark very quickly after death. This is hardly conclusive evidence of poisoning. Bill Hanson claims to have spoken to a member of the assassination team, but of course everybody is dead now and substantiating such statements is impossible. Was Winston Churchill capable of ordering Roosevelt’s death? Probably. Churchill was a pragmatic politician with a great love for his country. But all existing evidence indicates that the two men shared a warm friendship. Of course, that’s what’s out there for public consumption and the truth could be a different story.  Could be. That’s the pivotal phrase.

Two new theories have been put forward over the last decade. One pair of experts believes that Roosevelt actually died of melanoma, pointing to photographs of the late president with a tell-tale patch of skin discoloration above his eye. Yet another pair of experts postulate that Roosevelt never suffered polio, but rather that his paralysis stemmed from Guillaume-Barre Syndrome, an incurable condition of the nervous system. But the effects of GBS usually clear up in a short while after an attack, which seems at odds with Roosevelt’s long-term paralysis.

Sometimes, I think we want there to be more to a story than that offered up for the public. We want there to be a mystery. And sometimes there truly is. It is irresponsible to label every conspiracy as false and every conspiracy theorist as a nutcase. As always, I fall back on my vastly abbreviated version of Occam’s Razor—the simplest answer is usually the correct one. In this case, here’s a 63-year-old, paralyzed president with a history of high blood pressure, who served twelve of the toughest years in U.S. history. Even now, having read all of these varied theories, I am inclined to point at a cerebral hemorrhage myself. But the fact is, we’ll never know for certain.