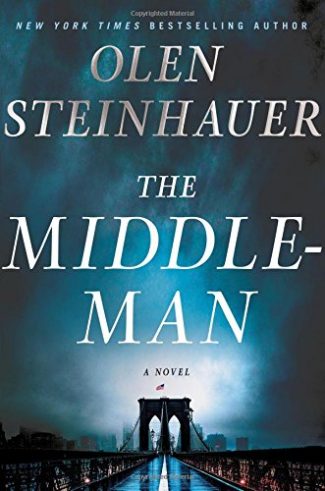 The Middleman by Olen Steinhauer—the perfect thriller for our tumultuous, uneasy time—delivers a compelling portrait of a nation on the edge of revolution and the deepest motives of the men and women on the opposite sides of the divide.

One day in the early summer of 2017, about four hundred people disappear from their lives. They leave behind cell phones, credit cards, jobs, houses, families—everything—all on the same day. Where have they gone? Why? The only answer, for weeks, is silence.

Kevin Moore is one of them. Former military, disaffected, restless, Kevin leaves behind his retail job in San Francisco, sends a goodbye text to his mother, dumps his phone and wallet into a trash can, and disappears.

The movement calls itself the Massive Brigade, and they believe change isn’t coming fast enough to America. But are they a protest organization, a political movement, or a terrorist group? What do they want? The FBI isn’t taking any chances. Special Agent Rachel Proulx has been following the growth of left-wing political groups in the U.S. since the fall of 2016, and is very familiar with Martin Bishop, the charismatic leader of the Massive Brigade. But she needs her colleagues to take her seriously in order to find these people before they put their plan—whatever it is—into action.

What Rachel uncovers will shock the entire nation, and the aftermath of her investigation will reverberate through the FBI to the highest levels of government.

KEVIN MOORE leaned against the counter at Sushi Taka. He counted the rings in his spicy tuna roll—one, two, three—thinking of architecture. Then he went about the ritual: the trimming of the chopsticks, the laying on of ginger, the measured smear of wasabi. The flavor was appealing, but nothing special, not to his palate, yet he had eaten so much of this food since moving to the West Coast a year ago that by now the ritual was second nature. The joy he took in eating sushi was one of form and not content; this realization felt like something important.

He shifted his gaze to the window in front of him—watching, like always. A few minutes ago, he’d seen a homeless guy urinate against the bland office building across the street, turning to face the wall as if by this show of modesty no one would notice. But San Francisco residents had seen far worse—hadn’t everyone?—so no one bothered him. By the time Kevin’s phone vibrated beside the tray, number unknown, the homeless guy was long gone, and there was nothing to interrupt the steady Sunday trickle of tourists, vagrants, and hookers.

“Hello?” he said into the phone.

“Now,” the caller said, then hung up.

Kevin blinked until his sight cleared, the hazy distance coming into focus again. He wasn’t scared, not really, because he’d been waiting weeks for this moment. Each morning, walking to the Office Depot in the Potrero Center where he stocked shelves and tried to be patient with customers, he’d carried in him the weight of knowing that this could be the day. It had never been, though, and after a while he’d begun to wonder if the day would ever come. Maybe Jasmine and Aaron had been full of hot air, posers in a city of posers, and all his time here would turn out to be a waste. And now …

No, not fear. Anxiety, yes, but not fear.

He lifted his phone again and scrolled through contacts: MOM. He typed, Off on trip with friends, let you know when I get back. xx. Send. Then he took out his wallet and removed his MasterCard, the Virginia driver’s license he’d never gotten around to changing, and even his library card, but he held on to his debit card. He brought everything to the trashcan and dropped in his soiled plate, the empty cup of miso soup, the cards, and his phone. As they disappeared into the darkness, an involuntary sigh escaped him. Though he knew better, he’d grown attached to the phone that had been pieced together in some Chinese sweatshop. The truth was that Kevin Moore loved the modern world even when he loathed it.

The trashcan lid snapped shut. It was accomplished.

He walked casually over to traffic-clogged Montgomery and south toward Market, past the grand columns of US Bank, and at the ATM emptied his account of $580. He pocketed the cash, then found a trashcan at the corner of Pine. Good-bye, cruel world—in went the debit card. He looked around, wondering if anyone had spotted his madness, but no one stared. Like a man pissing on a wall, people had probably seen this sort of thing before. They’d seen worse.

What was unexpected, though, was the feeling of lightness that overcame him. The anxiety fell away as he walked deeper into his day. A phone and a bunch of cards. So simple. Yet with a few deft moves he’d become unmoored. Who, now, was to say his name wasn’t George? Who could say if he was a rich man or a poor one? Who, really, could say what he was? I’m a NASA scientist, he could say. Or: I’m a cop. The only thing he wasn’t allowed to say was I’m a revolutionary seeking to bury all this modern sublimity.

At Market he joined the crowd heading down into the BART station to catch the 2:14 for Pittsburg/Bay Point. He reached the platform just in time to face the wind of the gray-hulled train before it emerged from the darkness. Despite the gusts, he was sweating, while around him people stared at little screens in their hands. Any other day, he would have been doing the same thing. One of the well-washed masses. His dizziness returned. It was the light-headedness, he understood now, of abandon. There wasn’t much air up here.

He searched for a seat, but there were none available until Orinda, where he settled next to an old woman reading the Bible. He peered over her shoulder—she was somewhere in Leviticus—and when she noticed him he apologized. “Are you a reader?” she asked.

“Been a while,” he said, which was true enough.

She smiled a beautiful smile and offered the Bible to him. “I got plenty of ’em.”

He tried to refuse, but her insistence was so full of earnest generosity that he gave in and carried it as his only luggage when he left at Walnut Creek. He waited until the train left again before dropping it, too, into a trashcan and trotting down the stairs to reach the underpass. He leaned against a wall and untied his left sneaker, then took it off. Holding it in his hand, he walked out into the sunlight, a slight limp from his unbalanced stride, hardly even feeling ridiculous. He waited at the curb, watching. Cars came and went, but he tried not to look expectant. He used his eyes clandestinely, checking windshields, and peered beyond to the expansive BART parking lot.

He’d been told so little. Take off your left shoe and wait. Maybe Aaron would show up. Or Mother would pull up and tell him to call it a day. Anything, really, felt possible.

He guessed that fifteen minutes passed before an old GTO—must’ve been midsixties—pulled up. A rangy-looking white man of indeterminate age leaned across the passenger seat and cranked down the window.

Kevin said, “That you, George?”

Kevin opened the door and settled into the stink of cigarettes and fried food. George put the car into drive, and they moved slowly forward. As they exited the parking lot and continued onto Oakland Boulevard, Kevin put his shoe back on and tied it up. “So,” he said. “Where to?”

“How about you let me worry about that?”

Listen to an audio excerpt from The Middleman!