Meet the Men Who Took Down Pablo Escobar

DEA operatives Steve Murphy and Javier F. Peña tell the true story of how they helped put an end to one of the world’s most infamous narco-terrorists.

So how did we go from small-town country boys to uniformed police officers in our local communities, to U.S. federal drug agents, to being “the guys who inspired the hit Netflix series Narcos,” to authors? Believe us when we say, no one is more surprised by all of this than we are! Javier grew up in south Texas, and Steve was raised in middle Tennessee and southern West Virginia. As the old saying goes, “the Lord works in mysterious ways!”

Throughout our post-Escobar careers with DEA, others who knew our story encouraged us to share what really happened during the Escobar manhunt. But that’s not why we worked on that investigation. It was our job, and it was just another case, albeit a very, very big case. In fact, the case of a lifetime. But when it was over, we simply moved on to the next case.

Near the end of our careers is when Eric Newman, Executive Producer and creator of Narcos, contacted us to tell our story. Never did we think the show would be so popular, not only in the U.S. but around the world. The popularity of Narcos led to a boom in our speaking business which averages about 75 appearances per year worldwide. At every show, we offer a Q&A at the end during which people can ask us about the investigation, the Narcos series, and even our personal lives. We learned that people really wanted to know the truth. And that desire to hear what really happened is what led us to write our book, Manhunters—How We Took Down Pablo Escobar. That’s what our speaking events and the book are all about, telling the truth. As actor Boyd Holbrook, who plays Steve in the Narcos series, says in season one, “Sometimes truth is stranger than fiction.”

Honestly, there isn’t that much special about either of us. We do have strong work ethics and the ability to focus on our mission to reach a successful conclusion. But we don’t consider ourselves heroes. That’s another reason we tell our story on stage, at conferences, universities, and other venues, as well as in Manhunters. We want the world to know who the real heroes are. The true heroes of the Escobar era are the Colombian National Police because they took their country back from the grip of a very evil person. We also recognize all the innocent people who lost their lives simply because they were in the wrong place at the wrong time.

What else have we learned from the book writing process besides people’s desire to know the truth? Although we already knew this, we’ve found it amazing how negative some people have been about our story. It demonstrates how innocent people can be led to believe what is false, to believe that a man who was responsible for thousands and thousands of murders and atrocities could be viewed as a Robin Hood figure simply because he knew how to manipulate society by throwing a little money around.

We already knew the significance and importance of teamwork, and we saw that carry over into the writing world, of which we knew nothing. We write like cops, not novelists. Thankfully, we were introduced to people with the expertise to get this project done in a professional manner. People like our literary agent, Luke Janklow of Janklow & Nesbit; like our publisher, Marc Resnic at St. Martin’s Press; like our ghostwriter, Isabel Vincent who took our ramblings and developed them into a coherent and readable work of art; like Adam Liebner and Jerry Silbowitz at United Talent Agency; and like David Buchalter at Greater Talent Network, as well as all the team members from these various groups. This entire endeavor has been an eye-opening experience for both of us, to say the least.

Meet the Women of Narco Noir

While there have been other learning experiences for us during the development of Manhunters, this last is one of the most important. We often hear how the younger generation lacks the will and desire to step up and continue our comfortable way of life, that life as we know it may cease to exist because Generation Whatever is too spoiled and bears a sense of entitlement. That may be true to a certain degree, but we also see young men and women stepping up to serve their fellow man as law enforcement professionals. And that is very comforting. A quote attributed to Edmund Burke says, “The only thing necessary for the triumph of evil is that good men (and women) do nothing.” And we fully agree with this statement. Thank God we have men and women, not only in the U.S. but around the world, who are not content to “do nothing.” Men and women who are willing to step up, take on this massive responsibility, put on a uniform and place themselves in harm’s way, and are willing to make the ultimate sacrifice, if necessary, to protect the rest of us. Those are our heroes. 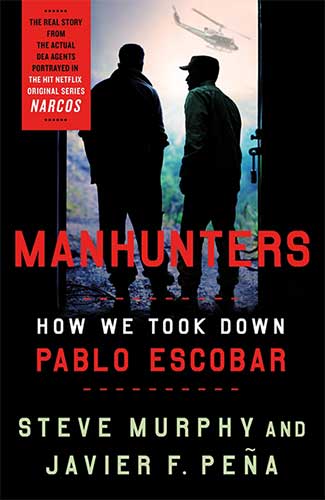 Colombian drug lord Pablo Escobar’s brutal Medellín Cartel was responsible for trafficking tons of cocaine to North America and Europe in the 1980s and ’90s. The nation became a warzone as his sicarios mercilessly murdered thousands of people—competitors, police, and civilians—to ensure he remained Colombia’s reigning kingpin. With billions in personal income, Pablo Escobar bought off politicians and lawmen, and became a hero to poorer communities by building houses and sports centers. He was nearly untouchable despite the efforts of the Colombian National Police to bring him to justice.

But Escobar was also one of America’s most wanted, and the Drug Enforcement Administration was determined to see him pay for his crimes. Agents Steve Murphy and Javier F. Peña were assigned to the Bloque de Búsqueda, the joint Colombian-U.S. taskforce created to end Escobar’s reign of terror. For eighteen months, between July 1992 and December 1993, Steve and Javier lived and worked beside Colombian authorities, finding themselves in the crosshairs of sicarios targeting them for the $300,000 bounty Escobar placed on each of their heads.

Undeterred, they risked the dangers, relentlessly and ruthlessly separating the drug lord from his resources and allies, and tearing apart his empire, leaving him underground and on the run from enemies on both sides of the law.

Manhunters presents Steve and Javier’s history in law enforcement from their rigorous physical training and their early DEA assignments in Miami and Austin to the Escobar mission in Medellin, Colombia—living far from home and serving as frontline soldiers in the never ending war on drugs that continues to devastate America.