Theodor Seuss Geisel was born in Massachusetts in 1904. He attended Dartmouth College in New Hampshire, where he spent much of his time working on the school humor magazine the Jack-O-Lantern. After Dartmouth, Ted went to Oxford University in England. While he was at Oxford, he realized that he wanted to support himself with the funny drawings he loved to sketch.

After Oxford, he moved back to his parent’s home in Massachusetts and spent all his time drawing and submitting cartoons to various markets. Finally, in 1927, the Saturday Evening Post bought a cartoon for $25. He signed the cartoon “Seuss.” That sale was enough to encourage Ted to move to New York City and try to get a job as an illustrator. He got a job at a humor magazine named Judge. Then he worked in advertising. All along he drew quirky animals and dreamed of making a living by telling their stories.

Yes. Yes. I know. We are all about criminality and mystery here. Here and now, I cheerfully admit that Dr. Seuss was my first introduction to the world of mystery. Long before I got my first subscription to Ellery Queen's Mystery Magazine at age fourteen, and even before I started reading the dynamic teenaged sleuths Nancy Drew, Judy Bolton, and Trixie Belden, I turned pages of a big colorful book and followed along as a playful boy named Marco walked home from school and his imagination turned a horse and wagon into many fanciful and wondrous things, such as a Rajah with rubies perched high on an elephant pulling along a brass band.

And To Think That I Saw it On Mulberry Street, a glorious book of imagination, was the first children’s book published by Dr. Seuss. If not the story of an actual crime, it does show how imagination can lead a little boy to tell a fabulous lie that might involve rajahs. Still, Marco winds up telling the truth to his father, so delinquency is only contemplated, not committed.

Many more of Dr. Seuss’s characters have their own brushes with crime. The Cat in the Hat and his pals Thing One and Thing Two play games and do tricks throughout the house, and what they think of as fun looks very much like criminal mischief to me.

And don’t forget that in Horton Hears a Who, Horton finds the speck of a city called Who-ville and makes friend with the Whos. Horton puts the speck on a clover to keep Who-ville safe, and then the Sour Kangaroo and Vlad the Vulture steal the clover and hide it. Can you think of anything more malicious than a kangaroo and a vulture trying to destroy an entire city of Whos?

You’re right. I can think of him, too. The Grinch is more evil than the Sour Kangaroo. How the Grinch Stole Christmas finds us visiting Who-ville once again. The Grinch is a neighbor, living just north of Who-ville and he hates Christmas, with all the joy and songs and laughter. I personally think he didn’t like seeing the Whos having so much fun. So, he stole Christmas: presents, feast and all. Now as we all know, what the Whos celebrate is the spirit of Christmas. The Grinch was so surprised when the celebration went on without goodies and gifts that he returned all the things he had stolen and joined in the merriment.

Dr. Seuss died in 1991. One of my all-time favorites was published the year before his death. Oh the Places You’ll Go points the reader toward the future and encourages him to take chances and find his way in life. Probably the most famous line, the one that has made this book a popular gift for graduates the world over is:

And there you have it. Dr. Seuss, who introduced tiny crimes and mysteries as puzzles and entertainment for our young minds, uses his skill to push us all along the path to solving the mysteries of our own futures. And for that I say, thank you Dr. Seuss.

The first book in Terrie Farley Moran’s Read ’Em and Eat Café cozy mystery series will be released by Berkley Prime Crime in October 2014. In the meantime her collection of short stories, THE AWARENESS and other deadly tales, is currently available in e-format for the Nook and the Kindle. Terrie blogs at Women of Mystery. 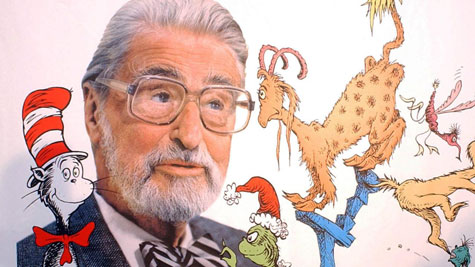 Oh the Places He’d Been: An Exploration of Dr. Seuss

Dear Reader, Please accept this post as an invitation to consider Dr. Theophrastus Seuss, who would have been 112 years of age today if were still with us. We remember him as the creator of silly stories and pictures—it’s easy to forget their intent as a reminder of the importance of thinking outside the box… Ann Rule, true-crime writing pioneer, died over the weekend at age 83. From the obituary in the Seattle Times: Ms. Rule broke out with her first book, “The Stranger Beside Me,” published in 1980. In it she profiled [serial killer Ted] Bundy, whom she got to know while sharing the late shift at a Seattle…