The Marlowe Papers is a historical novel told in poems about the life and mysterious “death” of Christopher Marlowe (available January 29, 2013).

On May 30, 1593, a celebrated young playwright was killed in a tavern brawl in London. That, at least, was the official version. Now Christopher Marlowe reveals the truth: that his “death” was an elaborate ruse to avoid a conviction of heresy; that he was spirited across the English Channel to live on in lonely exile; that he continued to write plays and poetry, hiding behind the name of a colorless man from Stratford—one William Shakespeare.

D e c i p h e r e r s
I’ll write in code. Though my name melts away,
I’ll write in urine, onion juice and milk,
in words that can be summoned by a flame,
in ink as light and tough as spider silk.
I’ll send a ream of tamed rebellious thought
to seed a revolution in its sleep;
each letter glass-invisible to light,
each sheet as blank as signposts are to sheep.

The spy’s conventions, slipping edge to edge
among the shadows, under dirty night,
mislead the search. To fool intelligence,
we hide our greatest treasures in plain sight.
This poetry you have before your eyes:
the greatest code that man has yet devised.

C a p t a i n  S i l e n c e
We dock in darkness. The skipper’s boy dispatched
to find our lodgings. Not a town for ghosts,
and with no wish to be remembered here
I’m wrapped in scholar’s garb, the bright man’s drab.
A quarter-moon is rationing its light
to smuggle us ashore without a fuss;
the fishermen are far away from port,
their wives inside and unaware of us.

You know I’ve come this way before; not here,
but in this manner, come as contraband
under the loose concealing cloak of night,
disguised as something of no interest,
as simple traveller. A man of books:
which words will make him interesting as dust
to folk who cannot read and do not care
they sign their papers only with a cross.
My name means more, and yet I shrug it off
like reptile skin, adopt some alias
that huffs forgettable, to snuff the flame
that now would be the death of me. Anon,
now Christopher is too much cross to bear.

The skipper calls me only with a cough.
Lugs, with his lanky son, my trunk of books.
No prop. For books will be my nourishment
in the sightless days without you. And if I
feel strange, or wordless, they will anchor thought,
ensure my brain is drowned in histories
that help me to remember who I am.

The skipper leads as shadows bolt from us
and streets fall back. And in his torch’s flame
a flicker of the tongue that can’t be bought,
which pirates sliced to secrecy. The rest,
that part he’d curl to make his consonants,
is long since fish-food on the Spanish main.
The boy speaks for him when we reach the door.
We’re hurried in, ‘Entrez,’ as though a storm
is savaging the calm still tail of May
and has the oak trees shaken by their roots.

The woman might be forty-five, or twelve.
A calculated innocence, a face
so open blank, it seems revealing as
it hides itself. This woman’s learnt to blanch
as bones will bleach when left to drink the sun,
as death will creep a pallor into skin
at just its mention. Clothed in widow’s weeds,
soft fingers straighten for gold. ‘Un angelot.’
Two months of food for sticking out her neck
for an Englishman. The payment’s hidden where
she’s still half warm. ‘So you will sleep above,’
she states as if she questions us, ‘the room
that slopes for Captain Silence and his boy.’
They heft my trunk upstairs between them, just.

‘The less we say, the better,’ she begins.
‘You want some ale? You’re thirsty? Or there’s sack
if you need something stronger.’ Then she pales,
as if she is reflecting me. Some look
betrays my loss to her, and in a blink
her loneliness has fastened on to mine.
‘You learnt the tongue from Huguenots?’ She nods
and answers her own question. ‘That is right.
And you. You are a religious man? But, no,
forget I ask you anything.’ In truth,
I am a scholar of divinity
and study the divine with open eyes.
Beyond all question, I would give her truth;
and yet, I cannot save her if I speak.

‘My husband was an Englishman, like you.
Or not like you. He had no love of books.
Ballads he liked. He used to sing this one—’
Her brain defends itself by giving way.
‘I don’t remember it.’ But here, her eyes
brim with the silence, break their trembling banks
as though she heard his funeral song. Then he,
her husband, a growl, is whispering in her ear
the rudest ballad he knows, clutching her waist
to spin her for a kiss. And then he’s gone,
and we are momentarily with ghosts.
‘Forgive me,’ she says. ‘The silence is poisonous.’

Upstairs, I’m with her still. She’s through the wall,
the spectre of a woman I might touch
on any other night but this. I don’t
undress so much as loosen up a notch,
for comfort now would later be exposed,
a gift to spot and clear as light to slay;
and bad enough, I’m running for my life
without my skin a beacon for the moon,
a human sheath that swallows blades. I sit
laced in my boots, my stomach tight, my ears
so strongly tuned they model sight from sound.

Next door, the widow braves into her gown
and lies awake. She listens to the house
and reads the whispers that pronounce her safe
though I would have her sacrificed for love.
I know her stares are pulling at the wall
I’m on the other side of, and her bed
feels colder for the want of me. And yet,
as time goes on, she’s bidding me adieu.

A woman’s skin might send a man to sleep,
but I must twitch and listen to the night
say Nothing’s here. The moon is out of sight
and something gnaws now, in the walls. I write,
the extra tallow that I paid her for
illuminating every sorry word.

How we are trapped in silence; how this night
has brought a silent shipwreck to her shore,
how silence unites us as it chokes us off,
how thick the silence hangs around the door
that dogs might almost sniff it, and the causes:
cutlass, lies or longing. Gathered here,
awake, or sleeping aware, are three full-grown
examples of the muted. And the boy
fathered by silence, slight and safely bred
to keep his trap shut. How the silence grows,
how it wraps around the house like sealing snow
though we are in the final day of spring.

Silence surrounds the men of deepest faith
and, listened to, may call a man to prayer.
I pray that no one follows us tonight;
that in England, rural keepers of the peace
are kept bewitched by corpse and candlelight;
I pray those men are instantly believed
who, having played my dark and murderous friends,
have stayed to stay the executioner’s hand;
I pray my soul’s absolved in all the lies
that tumble slick as herring from their tongues.
I pray, my friend, you’re warm and safe at home,
that doors remain unkicked and truths untold
and we have silence when the daylight comes.

Ros Barber was born in Washington, D.C., and raised in England. She is the author of three poetry collections and her poetry has appeared in Poetry Review, London Magazine, and The Guardian among many other publications. Ros has a Ph.D. in Marlowe studies and has taught writing at The University of Sussex for more than a decade. In 2011, she was awarded the prestigious Hoffman Prize for The Marlowe Papers. She lives in Brighton, England. The English Agent by Phillip DePoy is the 2nd book in the Christopher Marlowe historical mystery series (available February 21, 2017). In 1583, young Christopher Marlowe—student, brawler, rakehell, and would-be playwright—has had a dreadful evening. The first performance of his play in the corner of a very disreputable Cambridge bar is a humiliating flop, and then he’s… 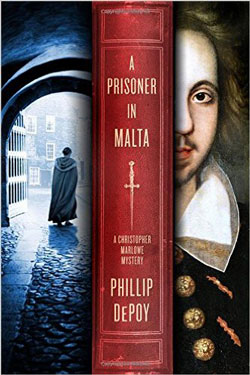 A Prisoner in Malta: New Excerpt

A Prisoner in Malta by Phillip DePoy follows Christopher Marlowe, an Elizabethan playwright, poet, and spy who is tasked with uncovering the truth of a possible plot to assassinate Queen Elizabeth I (Available January 26, 2016). In 1583, the nineteen-year-old Christopher Marlowe—with a reputation as a brawler, a womanizer, a genius, and a social upstart… Louise Fitzhugh’s Harriet the Spy was my first brush with the notion that writers were spies. At nine I was Harriet, furiously scribbling in my notebook as I peered under gates and through knot-holed fences in my neighborhood. I spied on my family too. Great fun, until my intelligence activities were discovered. Writers are natural…