The Making of a (Fictional) True Crime Story

May 31, 2018
Read Charlie Donlea's exclusive guest post about his love for true crime and how it inspired his latest thriller, then make sure you're signed in and comment below for a chance to win a copy of Don't Believe It! 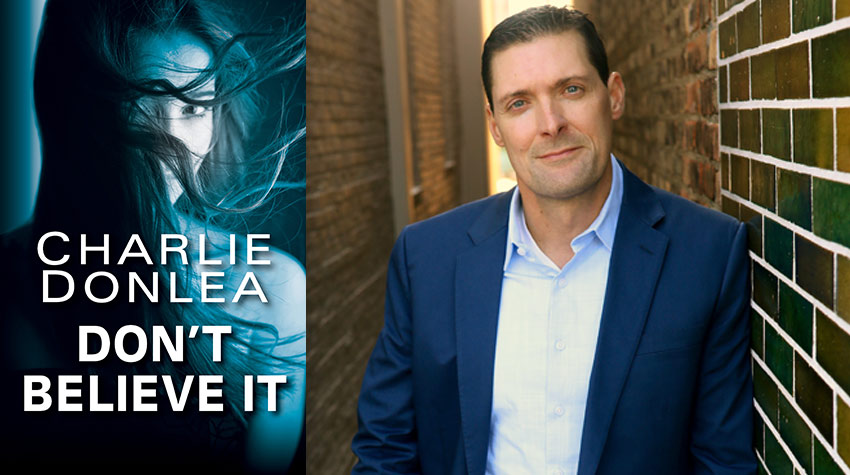 I was never a big fan of true crime until the podcast Serial hooked me back in 2014. Then, along with 20 million other viewers, I jumped on the Making a Murderer bandwagon. From there, the door to my true crime obsession split off its hinges, and I found myself listening to every podcast that promised the Serial experience and watching every documentary that lured me with the did-he-or-didn’t-he hook. Throw in a mysterious crime and a bizarre suspect at the center of it, and I’m like a dog drooling for a bone.

And I’m not the only one. Hits like The Staircase, The West Memphis Three, and The Jinx are proof that the public’s appetite for true crime is growing. Any given week, 48 Hours and Dateline feature great hour-long episodes that highlight sensational cases. In fact, true crime has become so popular that People Magazine has its own channel—Investigation Discovery—solely devoted to true crime exposés. Since Serial, many podcasts have left listeners helplessly parked in their garages long after they arrived home. S-Town and Dirty John are two of my favorites.

So, when readers ask where I get my ideas, in the case of my latest novel Don’t Believe It, the answer is easy: like the rest of the world, I’ve become a true crime junkie.

After watching dozens of documentaries and listening to countless podcasts, the story of a formidable documentary filmmaker who looks into a grisly, ten-year-old murder began to form in my mind. At the time this idea started percolating, I was in the middle of writing my second novel, The Girl Who Was Taken, so I jotted down a few notes and created a “Book #3” folder. Throughout the process of finishing my second manuscript, I continued to add to this folder anytime a thought came to me.

One thing nagged me, though, about all these documentaries—the endings rarely satisfied. In fact, they often created more questions than they answered. Hours of intensely building suspense frequently ended in a flurry of disappointment and confusion with the core mystery of the story clouded in as much fog as was present during the original hook. An Alfred Hitchcock quote sums up the reason for this phenomenon: In feature films, the director is God; in documentary films, God is the director.

The filmmakers behind some of our favorite true crime documentaries are retelling events that actually took place and are therefore limited by the facts of the case. How much fun would it be to write a fictionalized version of one of these documentarians hunting for the truth? My filmmaker wouldn’t be limited by the facts like the documentarians in real life because I’d be creating the facts as I wrote the novel. As I continued to fill my Book #3 folder with ideas, I was determined to create an ending to my fictionalized true crime tale that not only satisfied readers but shocked them as well. I wasn’t sure exactly how I would pull this off. I only knew that I had a great premise for what could be a really fun story.

After finishing my second novel, my family and I headed to the island of St. Lucia in the Eastern Caribbean for spring break. At the end of a full-day excursion that took us to an active volcano and bubbling hot springs and concluded with us snorkeling at the base of the majestic twin Pitons, we finished the day on Sugar Beach—a pristine strip of sand situated between Gros Piton and Petite Piton on St. Lucia’s southwest side. While our kids swam in Pitons Bay, my wife and I cozied up to the beach bar with the warm Caribbean sun on our shoulders, drinking Piton beers and sipping piña coladas.

My wife and I came to several revelations while we sat at that thatch-roofed beach bar. First, we learned that the bar was part of a beautiful hotel called Sugar Beach Resort, an idyllic tropical destination where Matt Damon had renewed his wedding vows a couple of years earlier. We decided the location would make the perfect setting for my third novel. We also agreed it would be a great place for our anniversary trip, which was coming up the following year. The last thing we learned while sitting at that bar on Sugar Beach was that the pleasant Oceanside tavern was open only to guests of the resort and was strictly off limits to day-trippers who were snorkeling the Pitons. My wife and I figured this out when another couple from our group tried to enter the bar and was sternly turned away. We played this discovery off casually and politely declined our bartender’s offer to refill our drinks. We slipped money under our empty glasses and quietly escaped Sugar Beach with our kids.

A year later, my love of true crime documentaries had translated into a manuscript that had my editor excited. It was about that time that my wife and I returned to Sugar Beach for our anniversary. This time, we were legally enjoying our drinks at the seaside bar as registered guests of Sugar Beach Resort. The warm Caribbean sun was again on our shoulders, Pitons Bay was glistening in front of us, and the twin peaks of the famed Pitons were peering down from the heavens. I was putting the final touches on my novel, and our anniversary in St. Lucia was doubling as a research trip.

In addition to all the perks of an epic beach vacation, my wife and I also had the opportunity to tour the inner workings of Sugar Beach Resort where my character’s blood would be discovered in a beachside sports hut, hike up Gros Piton where the victim of my novel would be pushed to his death before washing up on Sugar Beach with a devastating head injury, and visit the Bordelais Correctional Facility, the lone prison on the island where the accused will spend ten years of her life for a murder she swears she didn’t commit. In a final effort to prove her innocence, she reaches out to an old college friend who is a well-known true crime documentary filmmaker. For the first time in a decade, she feels like the truth has a chance to be discovered…

That anniversary trip to Sugar Beach was an unforgettable journey my wife and I will cherish forever. It’s the place where, more than a year earlier, I envisioned the perfect setting for what I thought might be a special story. And where I eventually wrote the final sentence of Don’t Believe It while sitting in villa 306—the same villa tucked into the foothills of Sugar Beach Resort where my fictional filmmaker stays on her first night in St. Lucia before she starts shooting her soon-to-be hit true crime documentary.

Comment below for a chance to win a copy of Don’t Believe It by Charlie Donlea!

Don’t Believe It Comment Sweepstakes: NO PURCHASE NECESSARY TO ENTER OR WIN.  A purchase does not improve your chances of winning.  Sweepstakes open to legal residents of 50 United States, D.C., and Canada (excluding Quebec), who are 18 years or older as of the date of entry.  To enter, complete the “Post a Comment” entry at http://www.criminalelement.com/the-making-of-a-fictional-true-crime-story beginning at 3:30 p.m. Eastern Time (ET) May 31, 2018. Sweepstakes ends at 2:29 p.m. ET June 12, 2018. Void outside the United States and Canada and where prohibited by law. Please see full details and official rules here. Sponsor: Macmillan, 175 Fifth Ave., New York, NY 10010.

USA Today bestselling author Charlie Donlea was born and raised in Chicago. He now lives in the suburbs with his wife and two young children. Don’t Believe It, his third novel, will be released on May 29, 2018.