November 4, 2020
Few feelings of accomplishment are more powerful for an author than those that accompany the completion of a manuscript... as long as, God help you, you don't lose it. Join Susan Cox, author of The Man in the Microwave Oven as she shares the stories of notable writers, all of whom—through one way or another—had lost their manuscripts.

We all resent Julius Caesar for “accidentally” burning the Library at Alexandria, and we’re still pretty peeved at Robespierre and his compadres for burning millions of manuscripts, volumes, and scrolls during the French revolution. But in more recent decades manuscripts have been lost in a startling variety of ways from theft, to house fires, to simple absent-mindedness—you’d be horrified, as I was, to learn the number that just gets left on buses and trains. (Which is more or less what happened when Ernest Hemingway’s wife, Hadley, famously lost a briefcase containing the draft of a novel and a collection of his short stories. Four years later, he published The Sun Also Rises and promptly divorced Hadley. It isn’t hard to understand why.)

But here’s something I learned while doing a little research into the reasons for, and responses to, lost manuscripts: While you can feel for the mourning author, the sympathy is muted and almost academic, until it happens to you.

When the manuscript for my newest novel was stolen, and while I was still gnashing my teeth and bewailing the cruelty of fate, my agent and some friends suggested I might find some small comfort in learning about other authors who had, in one way or another, suffered through the same loss. Researching their stories didn’t really make me feel better, but at least made me realize how fortunate I was that my best friend’s maid hadn’t tossed it on the parlor fire, which is what happened to Thomas Carlyle’s The French Revolution: A History. (Ironic, eh?)

The stories I found pre-date the computer age; we don’t hear of so many disasters now that we have the cloud, wherever and whatever that is. But maybe hard drive failures and laptop thefts are this century’s parlor fireplace because, as I learned, once the bits and bytes of a virtual manuscript are locked in a piece of stolen hardware, even protected behind passwords and a firewall, it might just as well be tossed on the flames.

Spousal irritation, liquor, and absent-mindedness played a role in other stories, but I think I may proudly say my situation is unique because my manuscript was stolen by a cat burglar.

A cat burglar breaks into a house while the occupants are at home—usually asleep—which sounds more romantic in the kind of fiction I write than it is in real life. In my case, among other things, the burglar stole an e-reader, my iPhone, my purse, and two laptops containing the work of several years—five incomplete WIPs and the completed manuscript for The Man in the Microwave Oven.

My particular cat burglar was bold; apparently unfazed that I was asleep in the bedroom two rooms away, he opened my refrigerator, twisted the cap off a new bottle of lemonade, and took a drink. He left his DNA on the mouth of the bottle, which is how he was eventually caught, but it was nearly eight months before I learned he’d been identified and several months after that before he was captured.

In the meantime, I poked at the sore tooth and looked for more writers who had suffered. I was trying, I realized, to justify my inability to bounce back rapidly from what felt like a life-changing calamity. Robert Ludlum and Edna St. Vincent Millay, for example, both lost manuscripts in very different ways, and they had very different responses.

Thriller writer Ludlum was a serving U.S. Marine when he wrote his first novel and then lost the manuscript while on shore leave in San Francisco. Alcohol may have been involved. He never found it, which means it could have turned up in my attic or garage during any of the twenty-five years I lived in the city. Ludlum didn’t venture to publish again until he was nearly fifty years old, but then he came up with Jason Bourne and his books sold 300 million copies so, safe to say, not a permanent setback.

Pulitzer Prize-winning poet Millay wrote a 122-page play or blank verse poem called Conversation at Midnight and in 1936 she took it with her on vacation to Florida, presumably planning to burn the candle at both ends. While she was hunting for shells on the beach, her hotel burned to the ground taking the manuscript with it. She rewrote it from memory and it was published in 1937, which sounds as if she barely paused for breath between disaster and rewrite.

Once begun, I couldn’t seem to stop looking for, and finding, fellow sufferers.

Malcolm Lowry’s first novel, Ultramarine, was stolen from his publisher’s car. He rewrote it in a matter of weeks. In an incredibly unlucky break he lost a second manuscript when his home in Canada burned down in 1944. He managed to pluck Under the Volcano from the flames, but In Ballast to the White Sea was incinerated. It was published in 2014, after his first wife discovered a dusty and forgotten copy. (Thereby redeeming first wives, perhaps.)

Dylan Thomas lost the manuscript of Under Milk Wood an incredible three times. In London, then America, then London again. The third time it was found in a pub. Alcohol may have been involved there, too.

Late Victorian novelist JM Falkner published three well-received novels and he has one of the best reasons I found for losing the manuscript for his fourth one on a train: he was the director of an armaments company and its possible the MS was stolen by an enemy agent, mistaking it for documents relating to weapons manufacturing.

In 1960 James Michener began researching and writing an epic novel about Mexico. He misplaced the manuscript and it didn’t turn up again for thirty years. Michener completed and published it as Mexico: A Novel. (As a sidebar I misread my own notes and thought this book was about Monaco which, in retrospect, does seem unlikely. I spent a fruitless hour trying to find any mention of it. You’re welcome.)

In 1970, Jilly Cooper left the only copy of Riders on a London bus. She never found it and finished rewriting it in 1984. It was the first of what became a wildly popular series, and the BBC later included it on their list of 100 Most Influential Novels.

As for me, I spent hours trying to recapture my stolen files with on-line help, and the more-or-less sympathetic assistance of various expert friends. The expert friends, it must be said, were frankly incredulous that I wasn’t using an on-line service to keep my documents safe. Snarling about victim shaming shut them up, but nothing could retrieve nearly a decade’s worth of work.

Did I have insurance? Yes thankfully, although the deductible was no joke. Did I have back-ups? Well, no. I was using Time Machine on my iMac, but the burglar also stole both my external hard drive and the back-up thumb drive I kept in my purse (in case of fire, I reasoned, I could just grab my purse and run.) So, no back-ups.

Do I have an on-line back-up now? You’d better believe it although I do rather cynically wonder if any back-up plan is foolproof. I keep remembering the tale of V.S. Naipaul, who in the 1970s deposited novels, scripts, diaries, travel journal notes, and letters—a lifetime of incidental and not-so-incidental writing—in a London warehouse. When he wanted them back in the 1990’s, he found they’d been incinerated by mistake.

I was, eventually, able to reconstruct The Man in the Microwave Oven from pen-and-ink notes and memory, but my laptops, and the other precious work they contained, have never been recovered.

About The Man in the Microwave Oven by Susan Cox:

Fleeing from a murder and family tragedy in her native England, where she was the scandal du jour for the tabloid press, Theo Bogart changed her name and built an undercover life in a close-knit San Francisco neighborhood. She didn’t expect to find love and friendship there, and now she doesn’t know how—or if—to reveal the truth.

After a confrontation with a difficult neighbor, Theo fears her secrets are about to be uncovered after all. When the woman who threatened to expose her is murdered, Theo is embroiled in the kind of jeopardy she crossed an ocean to escape. Worse yet, dangerous family secrets have followed her. Theo’s grandfather unveils a glimpse of the shadowy world he once inhabited as an agent for the British Secret Service, bringing an even bigger breed of trouble—and another death—to Theo’s doorstep. She finds herself fighting to protect herself, her family, and her new friends, aware that one of them might be a murderer.

Susan Cox has once again painted a delightfully quirky portrait of a colorful San Francisco neighborhood and a woman finding her way through exactly the kind of scandalous mystery she was trying to leave behind. 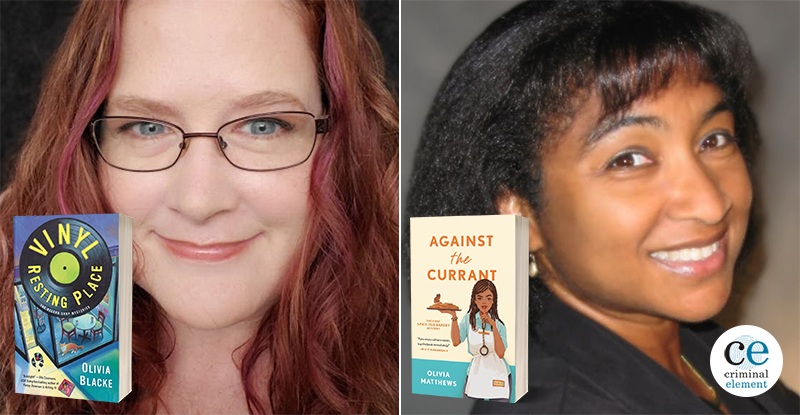