I spent the other night with a pair of my good friends soaking in a hot tub and sharing a bottle of wine. As we sat there in the bubbling peace of the water jets, surrounded by banks of shiny white snow, we began to do what we humans do best, that is, we began to argue.

The question being “Are criminals guilty of their crimes?”

Obviously, using the most literal interpretation, the answer is yes. They did the crime so now they must do the time, so to speak. But the real question is what led them to do the crime in the first place. Did they really have any choice in the matter? In many cases it is possible to map out a series of events since the criminal’s birth that ultimately culminated in their decision to do the deed.

In the spirited debate that followed we boiled it down to an issue of free will. Does it exist or is it all a relative illusion, only giving us the perception that we are actually making our day-to-day choices.

One could argue that from the moment of the Big Bang, every particle of energy has had its behaviors dictated by the laws of nature, and we, beings sacks of these particles ourselves, have had very little say in the matter. From birth to the grave, the atoms inside us are no different the atoms found inside the most inanimate rock, subjected to an endless stream of causation that dictates our action…or non-action, in the case of the rock.

As we argued in the whirl of foam and steam, did we really have any choice to do or think anything else? Every decision we make and every opinion we take is based on our personality and previous experiences, both two factors that we have no control over.

One of the most infamous and morally corrupt characters of literature is Alex from Anthony Burgess’ A Clockwork Orange. Alex is an utterly amoral deviant of a teenage whose great loves include violence, rape, and Beethoven. He is a character raised in a society where morality had been lost. His parents are weak and infirm, confirming that he was raised without any discipline or principles. And by all accounts he is utterly evil, but why? Raised in that environment from the time of a “pup” did he have any recourse? Is he not a product, albeit a violent one, of his environment? Most of us wouldn’t blame this child, for he is but a child. We would have no issue blaming his parents though. And what are the parents but the product of their childhood and environment? Thus the blurry line of cause and effect extends backwards into history. Where then does the blame lie?

In this tale of free will and morality, Alex still stands out as the protagonist. He is certainly a criminal, but we cannot help but sympathize with him. He is pure at heart and certainly passionate, unlike every other character in the book. When the government uses experimental aversion treatments to make acting on his criminal impulses impossible they inadvertently take away his free will, which we find disgusting and immoral. But is this not what law and punishment does? Those criminals who cannot behave within our system will be imprisoned, revoking their free will. But what if we didn’t have a free will to retract in the first place?

I am not arguing to open up the prisons and let everyone run free. Obviously, that would be problematic. Our questionable lack of free will is a philosophical concept, one that should be applied empathetically as we look at the criminals and bad guys of both literature and reality. Understanding that criminals are made by their environment is a key concept when confronting crime and punishment. If this is true, early childhood education, morality, and improving communities are the tools to reversing the grips of criminality.

In the end, we might not have a choice in what decisions we make, but we most certainly have to deal with their consequences.

To enter for a chance to win one of three paperback copies of Virus Thirteen by Joshua Alan Parry, make sure you’re a registered member of the site, and then simply leave a comment below.

NO PURCHASE NECESSARY TO ENTER OR WIN. A purchase does not improve your chances of winning. Sweepstakes open to legal residents of fifty (50) United States and the District of Columbia, who are 18 or older. To enter, fill out entry at https://www.criminalelement.com/blogs/2013/03/the-hot-tub-philosopher-on-crime-joshua-alan-parry beginning at 12:00 p.m. Eastern Time (ET) March 20, 2013. Sweepstakes ends at 11:59 a.m. ET on March 27, 2013 (the “Promotion Period”). Void outside of the 50 US and DC and where prohibited by law. Please see full details and official rules at https://www.criminalelement.com/page/official-rules-virus-thirteen-sweepstakes. Sponsor: Macmillan, 175 Fifth Ave., New York, NY 10010

Joshua Alan Parry is a medical resident at the Mayo Clinic. He received his medical degree from the University of Texas Medical School at Houston and holds a B.S. in molecular and cellular biology from the University of Texas at Austin, where he was also captain of the ice hockey team. Over the years, he has worked as a guide for at-risk youth in the Utah wilderness, a metal worker in Montreal, a salmon canner in Alaska, and a molecular genetics intern. He was raised in Keller, Texas. Leather-Bound Copy of A Clockwork Orange by Anthony Burgess

“The old days are dead and gone days. For what I did in the past I have been punished. I have been cured.” Put down your milk-plus and get into a little ultra-violence with this beauty-woot, leather-bound copy of A Clockwork Orange by Anthony Burgess. This classic tale of violence and free will is as… 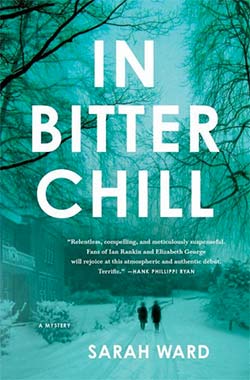 In Bitter Chill by Sarah Ward is a standalone thriller about a 30-year-old kidnapping that is once again relevant today (available September 29, 2015). The deepest secrets are the ones we keep from ourselves in this richly atmospheric, compellingly written, and expertly constructed crime debut from an emerging talent. Derbyshire, 1978: a small town in… The Killing Lessons by Saul Black is a standalone thriller about a pair of traveling serial killers who unknowingly leave behind a 10-year-old witness who now serves as the police's only shot at catching their killers (available September 22, 2015). In their isolated country house, a mother and her two children prepare to wait out…