The Historical Fiction Writer’s Conundrum: How Much History?

Read an exclusive guest post from Paddy Hirsch about how much history to include in historical fiction, then make sure you're signed in and comment below for a chance to win a hardcover copy and an audiobook copy of The Devil's Half Mile! 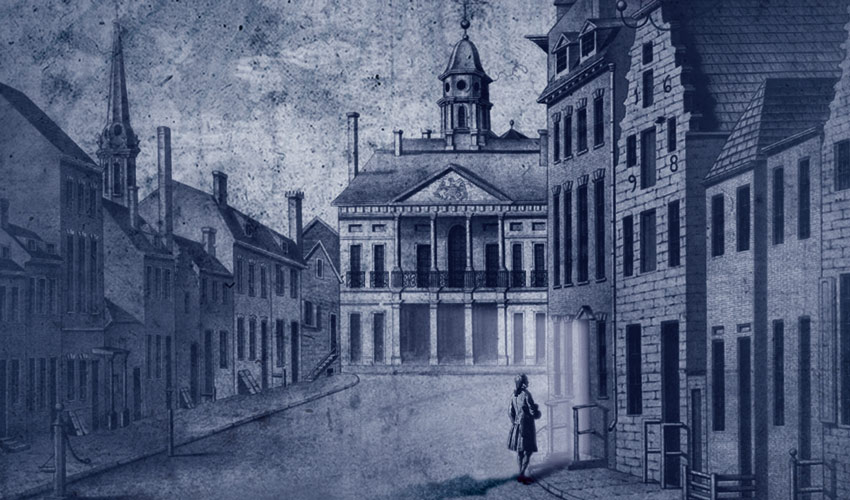 The moment I started writing The Devil’s Half Mile, I began what is shaping up to be a lifelong struggle. I’m working on a series of sequels to the book now, and every day I find myself wrestling with one of the great existential questions that hangs over the head of every writer of historical fiction:

Position 1: It’s fiction! Sure, you can set it in the past, but the historical setting is just the vehicle for the story. All you really need is a date. Say you decide on 1523. There are some obvious things to avoid, like cars, cellphones, and dentistry, and you need to know that 1523 wasn’t the bronze age, but otherwise, you’re good, right? I mean, you’re not writing history…

Position 2: It’s history! Yes, you’ve included a fictional character or two, but the whole point of a novel set in the past is to give readers an account of an historical event, only in a more engaging and arresting way. It should be a meticulous recounting of a sequence of events that actually happened, only with a fictional character or two thrown in to give things texture and color. Otherwise, the point is to be as accurate as possible, and not just with the chronology—you want to show people how things looked, felt, tasted, and smelled back then.

I’ve had plenty of advice from my literary influences as I’ve vacillated between these two positions. On one shoulder I have Hilary Mantel, author of Wolf Hall, which tells the story of Thomas Cromwell’s rise through the court of Henry VIII. Every significant player in the novel existed, and while Cromwell’s musings and the minutiae of his interactions may be invented, everything else—from the chain of events to the layout of London to the meticulous descriptions of daily life in Tudor Britain—has been rigorously researched.

On the other shoulder, I have Sven Hassel. Hassel is a bit of a mysterious character—possibly Danish, possibly a former trooper in the Waffen SS—who wrote a series of books about the members of a penal battalion in the German Army in the Second World War. Hassel nailed the teeth-grinding minutiae of the German soldier’s life and the brutal violence of small unit warfare. That made his books treasured contraband at my prep school. We would pass them around, wrapped in the torn-off covers of Hardy Boys adventures, and read them by torchlight under our blankets.

Now, I love Hilary Mantel … but what if you want to have Thomas Cromwell poison Ann Boleyn? There’s no room for that kind of malarkey in Position Two. As for Sven Hassel, well, over there in Position One, you can do pretty much whatever you want. But there’s something profoundly unsatisfying about that degree of freedom. Hassel’s novels riveted me when I was 12, but I read a couple of them again recently and realized they are disappointingly lacking, historically. They make a nonsense of the chronology of the war, and they are riddled with inconsistencies.

Which puts me, both as a reader and a writer, somewhere in between Hilary and Sven. For me, it’s fine to have made-up characters and a made-up storyline, but the close-up details have to be right, and the frame, however indistinct, needs to be absolutely accurate. For example, if you’re writing a novel set in New York in 1799, you can’t have your hero chase a man in a bowler hat through the Five Points: the area was still a freshwater pond back then, and the bowler hat wasn’t invented until 1849. As for the frame: you can’t have the newspaper headlines full of the war with the British. Or George Washington’s cabinet picks.

There are plenty of reasons to get these kinds of details right. If you don’t, you’ll lose readers. Not all of them, because a lot of us won’t know any different, but some will spot something inaccurate and just put the book down. You also risk betraying the reader’s trust. It’s a subtle thing, but I think that most people read historical fiction believing that they’re getting a kind of history lesson. When you put a fashionable woman in a see-through chemise negligee at a soiree in 1750, readers will believe that is the way some women dressed back then. If one of them happens to find out you’ve got it wrong—say by bringing it up in conversation with someone who knows the Directoire style didn’t emerge until the 1790s—our reader is likely to feel at best duped and at worst foolish. Betray her trust this way often enough, and she’s gone.

So how much history do you need? For me, not that much. I’ve found that too many historical novels are overloaded with history. And I’ve certainly been guilty of that myself. Early drafts of The Devil’s Half Mile included turgid explanations of financial irresponsibility in the run-up to the panic of 1792 and cabinet meetings discussing regulation thereafter. Yawn. It took me a while to realize that less is more, and I do best when I’m working like an impressionist—a smudge of history here, and a dab of period detail there. The cut of a foppish man’s coat; a slang word for brandy. That’s all it takes to catch a reader’s eye and hold his attention.

But that detail has to be true, and that truth comes from wide reading and hours of meticulous research. The trick is to know when to stop and what to leave out. Which is most of it. It can be painful to have spent hours and hours finding old paintings and comparing men’s coats, only to edit that detail out in the final draft. But it’s important to me to feel that I have that degree of knowledge about the period. That way I can paint the frame of my story and fill in the fascinating little details, secure in the knowledge that my fiction really is historical.

Comment below for a chance to win a hardcover copy and an audiobook copy of The Devil’s Half Mile by Paddy Hirsch!

The Devil’s Half Mile Comment Sweepstakes: NO PURCHASE NECESSARY TO ENTER OR WIN.  A purchase does not improve your chances of winning.  Sweepstakes open to legal residents of 50 United States, D.C., and Canada (excluding Quebec), who are 18 years or older as of the date of entry.  To enter, complete the “Post a Comment” entry at http://www.criminalelement.com/the-historical-fiction-writers-conundrum-how-much-history-comment-sweepstakes beginning at 3:00 p.m. Eastern Time (ET) June 4, 2018. Sweepstakes ends at 2:59 p.m. ET June 12, 2018. Void outside the United States and Canada and where prohibited by law. Please see full details and official rules here. Sponsor: Macmillan, 175 Fifth Ave., New York, NY 10010.

Paddy Hirsch has worked in public radio at NPR and Marketplace. He came to journalism after serving as an officer in the British Royal Marines and lives in Los Angeles. The author of the nonfiction book explaining economics, Man vs. Markets, The Devil's Half Mile is his fiction debut.