The ‘Haunted’ Moonville Tunnel: Inspiration for The Hollows

No butterflies were harmed in the researching of this novel.

Not long after I completed the final draft of The Widows—the debut title of my Kinship Mystery Series, inspired by Ohio’s true first female sheriff in 1925—my husband and I were enjoying a Friday night like the introverts we are: reading. (But in the same room.)

My husband happened to be reading an article online about quirky Ohio locations.

“Hey, have you heard of the Moonville Tunnel?” he asked. “It’s in southeastern Ohio—near where your novels are set!”

Truth be told, I hadn’t heard of it. So, of course, I started looking up information on the Moonville Tunnel.

And what I learned was compelling.

Moonville, it turns out, was a tiny village established in the 1880s in rugged and nearly impenetrable terrain in Vinton County, Ohio. The county is still the least populated in Ohio, and the most forested. Moonville served as a railroad depot for rail companies hauling coal and other goods through the region, and it served coal miners who worked in a small operation, as well as a few families tucked in the hills of the area. At its peak, it had about a hundred residents, and in addition to the depot, a schoolhouse, saloon, and cemetery. But the town was never accessible by other than foot, horse or mule, or a drawn wagon.

The Moonville Tunnel was blasted through a large hill to accommodate trains. It was a treacherous pass for trains, one that engineers dreaded, yet people would walk the track as a quick way to get to the village. People lived in Moonville through the 1940s. The track, though desolate and unsignaled until 1981, was used until 1985.

Of course, deaths on such a treacherous stretch of track are inevitable, and perhaps so too are the ghost stories that would follow. An engineer and fireman died in a wreck on the track in 1880, and not long after, stories began to abound of a ghostly engineer walking the track with his lantern. Then there was a brakeman, and a lady… All told, there were six reported deaths on the bridges along the track or in the Moonville Tunnel.

Well, how could I not be inspired by such a history, right in the Appalachian area of Ohio where my series is set? Particularly when Lily Ross, my protagonist inspired by the real-life Maude Collins, would have heard of the tales?

So, of course, my husband and I set out to visit Moonville Tunnel.

We went on a nice spring day, taking a major state route east out of our town, then once in southeast Ohio, turning off onto a smaller state route. Then a county route. Then a smaller county road. At one point, the route was so remote that butterflies were settled on the road in front of us. (They scattered as our car approached. No butterflies were harmed in the researching of this novel.)

Once we found signage for the Moonville Rail Trail and the Moonville Tunnel, we got out and started walking. We crossed one bridge, then got to the tunnel, which we walked through. I’d love to report a sense of ghostly tingles and spookiness, but I’ve always been nonchalant at the notion of ghosts. (Either they’re among us… or they’re not… and I have no control over them either way.) Once through the tunnel, I took off my shoes and socks and walked on the ballast for several yards as research for a scene in The Hollows. I was happy to put my socks and shoes back on! Oh, what we writers will do to get a scene description just right!

Even so, when we reached a washed-out bridge, our hike came to a stop. We didn’t trust ourselves to walk across logs and stones, and sloshing through the creek in jeans and tennis shoes, especially since we weren’t sure of the water’s depth, didn’t strike us as wise either. On the other side, we would have found the foundations and remains of the town of Moonville.

As we drove home, Moonville became Moonvale in my imagination, a place similar to Moonville but with its own history and backstory for the purposes of my novel.

And I also thought about how, not too far from Moonville, is Ohio University in Athens County. One of the buildings on OU’s campus is The Ridges, a magnificent structure that operated as an asylum for those with mental illness from 1874-1993, under various names. In the 1920s, it was known as the Athens Asylum for the Insane (renamed the Hollows Asylum for the Insane in my novel.)

See Also: The History Behind The Hollows

Eventually, I visited The Ridges for an exterior tour of the facility, learning a great deal about its history. The Ridges, too, is considered by many to be haunted.

And though as mentioned, I’m neutral on the notion of haunted places or ghosts, I do believe in personal and cultural ‘haunts,’ events or experiences from our individual or collective pasts that grasp onto our present and future. I began thinking about how such haunts might impact trails followed, might even goad someone to follow a path along a treacherous train track.

NOTE: To learn more about the real-life Moonville Tunnel and the current rail-trail, follow these links. If you decide to visit the Moonville Tunnel, do your research carefully, and follow the trail with extreme caution—there are destroyed trestles and drop offs along the way. 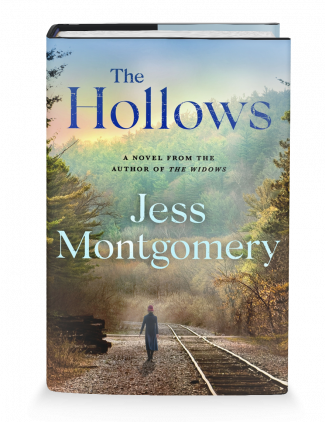 About The Hollows by Jess Montgomery:

The Hollows, Book #2 in the Kinship Mystery series, is a powerful, big-hearted and exquisitely written follow-up to Jess Montgomery’s acclaimed debut The Widows.

Ohio, 1926: For many years, the underground railroad track in Moonvale Tunnel has been used as a short cut through the Appalachian hills. When an elderly woman is killed walking along the tracks, the brakeman tells tales of seeing a ghostly female figure dressed all in white.

Newly elected Sheriff Lily Ross is called on to the case to dispel the myths, but Lily does not believe that an old woman would wander out of the hills onto the tracks. In a county where everyone knows everyone, how can someone have disappeared, when nobody knew they were missing? As ghost stories and rumors settle into the consciousness of Moonvale Hollow, Lily tries to search for any real clues to the woman’s identity.

With the help of her friend Marvena Whitcomb, Lily follows the woman’s trail to The Hollows―an asylum is northern Antioch County―and they begin to expose secrets long-hidden by time and the mountains.

Comment below for a chance to win a copy of The Hollows by Jess Montgomery!

The Hollows Comment Sweepstakes: NO PURCHASE NECESSARY TO ENTER OR WIN.  A purchase does not improve your chances of winning.  Sweepstakes open to legal residents of 50 United States, D.C., and Canada (excluding Quebec), who are 18 years or older as of the date of entry.  To enter, complete the “Post a Comment” entry at https://www.criminalelement.com/a-haunted-rail-tunnel-inspiration-for-the-hollows/ beginning at 5:15 p.m. Eastern Time (ET) January 10, 2020. Sweepstakes ends at 5:15 p.m. ET January 24, 2020. Void outside the United States and Canada and where prohibited by law. Please see the full details and official rules here. Sponsor: Macmillan, 120 Broadway, New York, NY 10010.

All Photos Courtesy of Jess Montgomery.