December 3, 2021
On December 3, 1926, Agatha Christie mysteriously disappeared for several days. To commemorate the 95th anniversary of this puzzling event, author Nina de Gramont shares her list of essential books from the mystery-writing icon. Which ones are you going to read?

Two billion books and counting. Agatha Christie is not only the best-selling fiction author of all time, she’s a cultural icon, almost synonymous with mystery itself.  Whether you’re a seasoned Christie fan who’s read every single one of her sixty-six detective novels, or just setting out on the great treat of discovering her work, these are the books that showcase the woman and writer she was, giving the best insight into why she’s so enduring a phenomenon.

Murder on the Orient Express, 1934

Christie’s masterpiece. The most tightly plotted crime novel you’ll ever read, with a wealth of fascinating characters who are improbably but inevitably linked by the astonishing denouement. The landscape and train are perfectly rendered. Agatha Christie traveled on the Orient Express many times, on her own after her first marriage ended, and later with her second husband, Max Mallowan, an archaeologist whom she joined on digs in Syria, Turkey, and Iraq.

It’s not just Christie’s books that are loveable, it’s their author. One minute Christie fits our image of a proper, middle aged British lady, and the next she breaks that image to bits. Reading this memoir of her travels in the Middle East is like going to the most extraordinary places with your funniest and kindest friend. Christie writes with enormous warmth and curiosity, and proves herself to be an artful observer of human nature (a trait she often loans to her detectives). She’s also delightfully game. “I think I like sleeping in a tent!” she tells her husband, as they settle down for a long stretch of camping in the arid Syrian desert.

In Come, Tell Me How You Live, Christie lays out her fantasy of owning “a dream island,” where no worries of the outside world can intrude. “On the dream island there is white sand and blue sea – and a fairy house, perhaps, built between sunrise and sunset.” And Then There Were None’s Soldier Island promises to be just such a place, until its visitors are murdered (naturally), one at a harrowing time. Does the final reveal make perfect sense? I’ll leave that to each reader to decide, but this is the rare mystery that’s more about its characters than its story. Each has an intricately conceived past, and Christie said it was her most difficult book to create. Never a formulaic writer, she enjoyed challenging herself, and wrote this one specifically because “it was so difficult to do that the idea had fascinated me.”

Christie’s ode to gossip shines with perfectly drawn characters, and the beauty of the English countryside. This is a grand example of why, despite the unexpected deaths, we all wish we could live inside an Agatha Christie novel. Kings Abbot is as cozy a town as anyone could imagine, and the Mah Jong scene alone is worth the price of admission – with hilarious, fast-paced, and multi-layered dialogue that presages Christie’s career as a dramatist. In her nonfiction Christie proves herself always on the verge of a good laugh, and that tendency hides itself behind even her most murder-packed narratives.

Take away the murder and suspense and you’ll still be charmed, happily turning pages and staying up to read just one more chapter. The autobiography proves it’s Christie’s voice that makes her books irresistible, and she seems to enjoy dispensing with tight plots in favor of meandering, telling her own story in chronological order while adding in musings on life and lists of likes and dislikes. Even with all her unmatchable success Christie remains humble and self-deprecating, offering up the loveliest details on how she’d like to be remembered as a mother, wife, and friend. My favorite anecdote is the time, as a young woman – horseback riding with friends – her hairpieces flew off in the wind. She recounts an admirer’s approval with great pride: “I like the way she behaved when all that false hair fell off; didn’t mind a bit. Went back and picked it all up and roared with laughter.”

Who better than that clear-eyed and great-humored woman, to escort us through every possible crime scene? 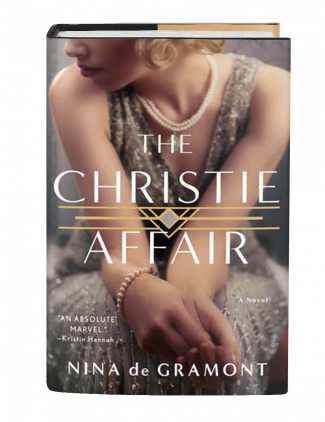 About The Christie Affair by Nina de Gramont:

Every story has its secrets.
Every mystery has its motives.

“A long time ago, in another country, I nearly killed a woman. It’s a particular feeling, the urge to murder. It takes over your body so completely, it’s like a divine force, grabbing hold of your will, your limbs, your psyche. There’s a joy to it. In retrospect, it’s frightening, but I daresay in the moment it feels sweet. The way justice feels sweet.”

The greatest mystery wasn’t Agatha Christie’s disappearance in those eleven infamous days, it’s what she discovered.

London, 1925: In a world of townhomes and tennis matches, socialites and shooting parties, Miss Nan O’Dea became Archie Christie’s mistress, luring him away from his devoted and well-known wife, Agatha Christie.

The question is, why? Why destroy another woman’s marriage, why hatch a plot years in the making, and why murder? How was Nan O’Dea so intricately tied to those eleven mysterious days that Agatha Christie went missing?

Nina de Gramont is a professor of Creative Writing at University of North Carolina, Wilmington. She is the author of THE LAST SEPTEMBER (Algonquin 2015) as well as several Young Adult novels.