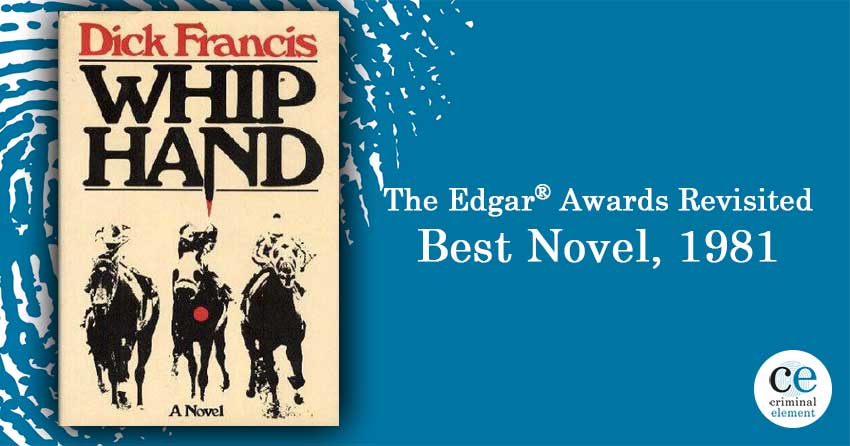 I had my pick of several compelling reads, all past Edgar Award winners, but felt drawn to the novel Whip Hand by Dick Francis. I’ve long been curious about Dick Francis’s stories, though I have never actually read one. I offer this confession willingly and with regret for what I’ve denied myself these many years—great books with roiling plots told in a distinct, impeccable voice.

You see, Dick Francis novels were a staple on the coffee table in my grandparents’ den, and I keenly remember eyeing them as a boy, attracted to the bold covers of silhouetted horses and riders, but not yet compelled to open the books. I thought, ignorantly of course, what’s so darn mysterious about horse racing? In my limited world-view, I knew only that a jockey goes around a track on a horse, and the faster they ride, the more winnings they collect, and it all seemed rather bland and straight forward to my young brain.

Inevitably, each year brought a new Dick Francis novel to the coffee table, and I, none the wiser, remained perplexed at what he could keep writing about while refusing to address this question by cracking the spine.

I would later become a suspense novelist, following in the footsteps of my father, Michael Palmer, who helped to pioneer the medical suspense genre while writing many critically acclaimed bestselling thrillers until his death in 2013. At the request of St. Martin’s Press, my father’s longtime publisher, I agreed to take on the responsibility of carrying forward his legacy and wrote several well-regarded Michael Palmer medical thrillers in the years after his passing.

When I saw there was a Dick Francis novel (several in fact) on the list of books I could select for this Edgar Awards Revisited series, I knew this had to be my chosen read. Not only did I think of my grandparents and those coffee table books, but I also thought of Felix Francis, Dick’s son.

Felix did as I did and, in the wake of his father’s passing, took up the mantel to write Dick Francis horse racing mysteries. There were too many synergies for me to ignore, so after decades of not knowing I finally dived into the world of Dick Francis and was delighted to make the acquaintance of the incomparable Sid Haley.

Sid’s primary job in the story is to explain why some promising horses have been mysteriously losing, then dying. There were few side gigs for Sid along the way, namely tracking down the conman who had turned his ex-wife, Jenny, into something of an unwitting criminal, and another delving into the shady world of horse racing syndicates. But any detective could have tackled those mysteries blandly and in a rather unforgettable manner.

To make Whip Hand a winner of a novel required Sid’s character to be driven with purpose and conflicted in his aims. The very last line of the book (no spoilers here, I promise), delivered by one of the antagonists Sid attempts to bring to justice, sums up his character nicely: “Isn’t there anything,” he said bitterly, “that you’re afraid of?”

The answer, given all that Sid encounters, the threats and violence he endures, is a resounding no. In fact, it would seem that Sid was born looking for a challenge, given that he was a former race jockey, a job where extinguishing fear is critical to success on the track.

However, Sid no longer rides, having lost his hand in a horse racing accident. Replacing the missing appendage is a mechanical version out of a Jules Vern novel, advanced for the times, though not sophisticated enough to allow Sid to jockey again. Depression follows, but it’s not Sid’s yearning for the former glory days that ends his marriage, but rather the fear he has so diligently trained himself to suppress that carries over into the rest of his life and becomes the relationship’s undoing.

Jenny herself explains. “I need a husband who’s not so rigidly in control of himself. I want someone who’s not afraid of emotion, someone uninhibited, someone weaker.”

That someone isn’t Sid, so Jenny’s loss is our gain. In Sid, the reader gets a stubborn, fearless, determined hero who seeks to make himself whole in both heart and hand, and Francis makes it clear this is a quest with no end. Coupling the depth of Sid’s character with Francis’s crisp, precise prose—a style that undoubtedly inspired the works of giants such as the late, great Phillip Kerr and Ian Rankin—the series’ formula becomes clear. What also becomes apparent is what I missed all those years ago when I literally misjudged a book by its cover.

There’s much more to a Dick Francis novel than the unparalleled depictions of the horse racing world and clever mysteries for Sid to solve. Sid is a man so committed to his craft, so dedicated to winning, that he becomes a study in contradictions, a person who wishes to be held, to cry, but cannot do either.

With all Whip Hand has to offer—a taut, nuanced plot, fascinating characters, and an expert guide into a world most of us know nothing about (Francis himself was a former jockey), it’s no wonder my grandparents kept coming back for more.

Daniel Palmer is the author of numerous critically acclaimed suspense novels including Trauma and Mercy. He received his master’s degree from Boston University. Daniel lives with his wife and two children in New Hampshire where he is at work on his next novel.