The Edgar Awards Revisited: The Progress of a Crime by Julian Symons (Best Novel; 1961)

Up next in our Edgar Award re-read is 1961's winner The Progress of a Crime by Julian Symons, a worthy winner by an esteemed, if not unfairly overlooked writer. Brian Greene reviews. 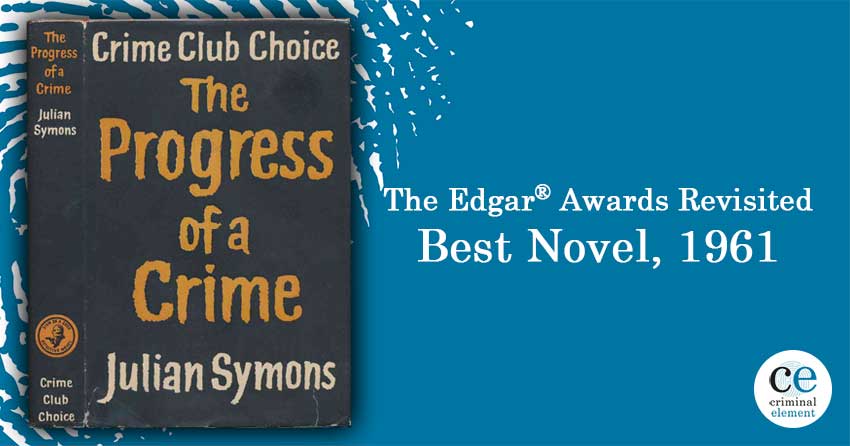 Englishman Julian Symons (1912-1994) was/is something of an oddity within the world of crime fiction. His is a name that rarely gets mentioned among enthusiasts of the genre. You get the sense that, even in his own time, he flew somewhat under the radar within the realm of suspense novel writers and buffs. All this, despite the fact that he wrote close to 30 crime novels that were published over five decades, that he won this Edgar for best novel, was once named Mystery Writers of America Grand Master, and was President of the esteemed British Detection Club from 1976-85.

Having read a handful of his crime novels, I can say that all are worthwhile. And that this one, which was published in 1960 and got the Edgar in ’61, is the best of those. I haven’t read any of Symons’s other kinds of literary work, but it’s an impressive body of effort that includes poetry, biographies, literary criticism, and history. He was a well-rounded author and a fine crime fiction scribe who deserves more ink than he gets.

At the center of the plot of The Progress of a Crime is an accidental murder. It’s Guy Fawkes Night. A cub reporter at a provincial newspaper, which is located not far from London, is sent off to another small town-type area to cover their annual festivities celebrating the event. But while the young journalist, Hugh Bennett, expects the assignment to be a yawn-inducing affair, he winds up witnessing a killing. A pack of teenage ruffians crash the party on motorcycles with the purpose of terrorizing the locals and getting some revenge on a resident blowhard who recently humiliated them in front of a small crowd. Using a knife on the bully, the lads wind up fatally injuring him when they only meant to cut him a little and give him a scare.

The Progress of a Crime has no whodunit aspect. We know pretty well from the beginning of the story who is responsible for the murder, as well as a second killing that occurs as a result of the first. At least, we know it was one or two out of a pack of young toughs. What drives the story, rather, is a look at the machinations within the law, the media, society, and people’s hearts and minds in the aftermath of the slayings. We see how a higher-up in London law enforcement, having been a personal friend of the first victim, exerts extra pressure on Scotland Yard to find out the killer(s) and seek maximum punishments on him or them. We see how police detectives go about trying to squeeze information from the boys in the gang, at times turning them on one another, once they have determined their identities. We see what happens when the lawman leading the investigation makes the tragic mistake of letting the boys go free after the first round of questioning. We see how the bigger newspapers take the story away from the one for which Hugh Bennett writes. And we see how one such paper, which likes to be seen as liberal-leaning, decides to take up the cause of one of the boys in the gang because his father is a leading figure within the Labour movement. And we see how Hugh Bennett, an important witness for the prosecution, gets pulled in different directions when he falls in love with the sister of one of the accused boys.

The following passage shows how Symons used public and individual reactions to the killings to expose some societal push and pull in England at the time. The segment concerns the city newspaper, the Banner, which has taken it upon itself to defend one of the accused teenagers. The boy now sits in jail as the prosecution assembles a case against him and the one other lad they have determined were the ones actively responsible for the murders. The paper has made an agreement with the boy’s family (The Winters), which includes his father (the Labour party man) and his sister (a schoolteacher in her early 20s). The agreement goes like this: the Banner will pay for a high-end legal defense team to represent the lad in court, and they will grant the family coverage in their paper—coverage which will allow the Winters to show themselves in a good light in the public eye. In exchange, the boy’s dad and sister must allow the paper free access to their lives, even including taking pictures of them inside the privacy of their home and printing the photos on their pages.

The problem is that the father, George Winter, is a stubbornly proud man who mistrusts all newspapers. (OMG, a “fake news!” cry in an English crime novel from 1960!) Winter has been raising his two children on his own since his wife died some years back. He takes great pride in the solidity of their home life, despite him being a single parent and despite the fact that they live in a neighborhood largely characterized by squalor. He loathes the idea of some big city newspaper people invading his home and using his family to make themselves look good. Watch and listen as two high-end solicitors on the legal team the Banner has hired come to pay the first visit to the Winter home:

As he shook hands with the Winters, Newton summed them up. The man a typical working class figure, ill at ease in his best suit. A fine head, though, good broad shoulders, a look of awkward honesty. Upon the whole Newton was favorably impressed. The daughter was pretty enough, in an unpretentious, unfashionable way. Newton, who liked flamboyant beauty, paid little attention to her.

They had been talking for a little while when the photographer came in. “Is it all right now?”

“If you’ll sit a little closer. Mr. Newton in the middle talking to Mr. Winter.”

Newton brushed away the ash that always collected on his waistcoat. Winter stood up. “What is this?”

“This gentleman is from the Banner,” Earl said. “He’s here to take pictures.”

“This is just another publicity stunt, then?”

“Certainly not. They’re simply taking a couple of pictures, that’s all.”

“Taking a couple of pictures. What have they been doing ever since it all started but taking prying pictures, poking their noses into other people’s business? I’d like to break his bloody camera.” Winter took a step forward. The photographer retreated. “I thought this was to be a serious conference about my son’s case. Seems we’re just jumping through the hoops again when the Banner cracks the whip. I’m not doing it, that’s all. Either he clears out or I do.”

“Mr. Winter.” Newton stood with his head thrust forward, a little red-faced bullock about to charge. “You made this arrangement with the Banner.”

“Yes. But I never knew what it would mean.”

“You made the arrangement. You knew it would entail personal publicity, just as Mr. Earl and I knew it. If you don’t want to abide by the arrangement, say so. Mr. Earl and I will withdraw from the case.” Winter glared at him. Newton went on remorselessly. “If you wish us to go on acting in your son’s interest, sit down.”

Winter sat down and folded his arms. “Take your pictures.”

In all, The Progress of a Crime is a craftily written, suspenseful crime story that doubles as an eye-opening social novel. Its Edgar came deserved.

Thanks again for joining us as we work our way through this list. Make sure to stop by next week 1962’s winner: Gideon’s Fire by J. J. Marric. Look for it Friday.