The Lingala Code might be the most mysterious Edgar award-winning novel out there, and I don’t just mean the plot. Even getting a copy of this book required internet research and a special order. Doing background for this review, I stayed up until 3:00 AM one night trying to untangle the biography of the author, Warren Kiefer. What I discovered was a trail of pseudonyms that lead from New Jersey, through graduate school in Maryland where he studied South American History, to a (possible) stint in the marines, to a short but successful career as an Italian horror film director in Rome, ending up in Buenos Aires where, after publishing seven novels, it is believed that Kiefer passed away (though no one seems to know for sure). The man was so compelling, actor Donald Sutherland described him as a “lovely cigar smoking whiskey drinking mystery writing rogue.” Sutherland and Kiefer were so taken by each other, Kiefer dedicated The Lingala Code to Sutherland, and Sutherland named one of his sons after the author. By the time I got the completely nondescript book in my hands I had no idea what to expect. Part murder mystery, part spy novel, part love story, and part reflection on chaotic post-independence Africa, The Lingala Code turned out to be a very enjoyable book set in the early 1960s Democratic Republic of the Congo (formerly known as Zaire). I will admit that having a background in the Congo’s history helped me a great deal while reading this book. In 1959, after almost a century of brutalization at the hands of the Belgians (during which time, King Leopold II killed 10 to 15 million Congolese people, constituting arguably the worst genocide in the history of the world), Congolese soldiers mutinied against their Belgian commanders setting off violent uprisings across the country. By early 1960, most of the Europeans living in the Congo had fled, draining hundreds of millions of dollars from the newborn nation in the process. In 1961, the democratically elected Congolese Prime Minister, Patrice Lumumba, was assassinated (with American and Belgian help after Lumumba turned to the Soviets for financial assistance). By 1962, all that was left in the Congo was a brutalized people fighting for independence, a decimated economy, and a post-colonial power vacuum. This chaotic birth of a nation acts as the backdrop for The Lingala Code. Told in first-person ten years after the events of the novel, the main character is Michael Vernon, a CIA agent working undercover at the American Embassy in the capital city of Kinshasa. Vernon is sent into the region as it is teetering on the brink of civil war, tasked with providing intelligence to the Americans while also keeping an eye on the roiling political battles taking place across the Congo. In the midst of this chaos, Vernon’s dearest friend is murdered. In Vernon’s words at the closing of the first chapter:

Ted had many friends in the Congo. One of them spent a hundred dollars for the 9mm Browning automatic used to kill him, and paid the killer fifty more to do the job.

After the murder, the city police quickly arrest a local thief, but Vernon is skeptical. When the prime suspect dies mysteriously in police custody, Vernon decides that a coverup is afoot and sets out to solve his friend’s murder while also quelling uprisings, falling deeply in love, and navigating the back-stabbing world of intelligence work in the midst of the Cold War. 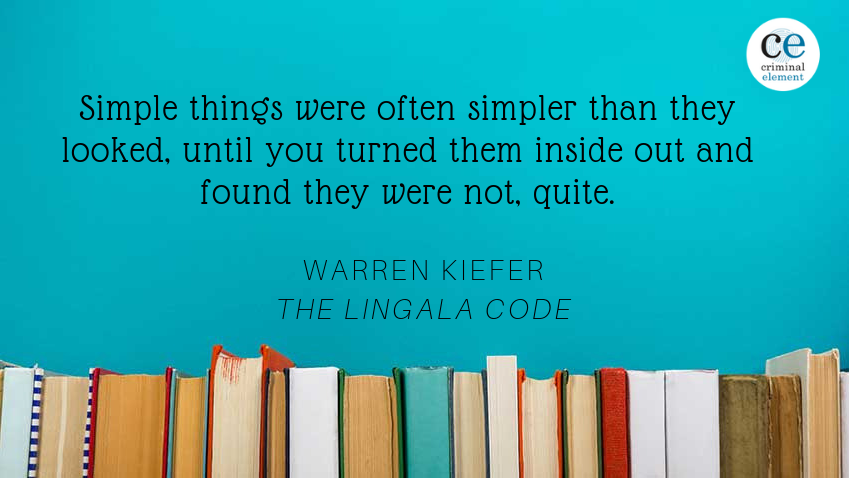 In the course of his intelligence work, Vernon and his assistant develop the titular code, a cipher based on Lingala, a Bantu language currently spoken by over 70 million people. The “Lingala Code” is used by Vernon to send secret messages via radio to his various contacts and represents the primary theme of this book:

Simple things were often simpler than they looked, until you turned them inside out and found they were not, quite.

Building on that theme, nothing in Vernon’s world turns out to be what it seems in politics, love, and even murder. His quest for truth in a time and place where truth has little value provides a compelling story. Vernon himself is a likable character, measured and self-deprecating, acknowledging his own shortcomings and privileges as an American man in Africa. The writing is thick with atmosphere, conjuring a world of blood and sweat. Kiefer’s enigmatic history, coupled with his authentic, vivid descriptions, made me wonder if he hadn’t actually spent some time working for the CIA in the Congo. Praise aside, The Lingala Code is still a product of its time. Though the Congolese characters express understandable cynicism or outright hostility toward the American presence in their country, the horrific historical context is still little more than an adventuresome backdrop for a very American hero. Likewise, though it’s made clear that Kiefer disapproves of such language, there is racist language in the book. That said, Kiefer mostly manages to thread the needle, telling a riveting story in the context of a politically charged history with sensitivity and accuracy. More importantly, The Lingala Code is much like Warren Kiefer himself—an evocative mystery that made me want to stay up late to find out what would happen next.

Join us again next Friday when Carol Potenza, winner of the 2017 Tony Hillerman Prize reviews 1974’s Best Novel, Dance Hall of the Dead by Tony Hillerman. See you then!