The Edgar Awards Revisited: The Light of Day by Eric Ambler (Best Novel; 1964)

Join Gabino Iglesias as we dive into the 1964 Edgar Award winner for Best Novel: The Light of Day by Eric Ambler. 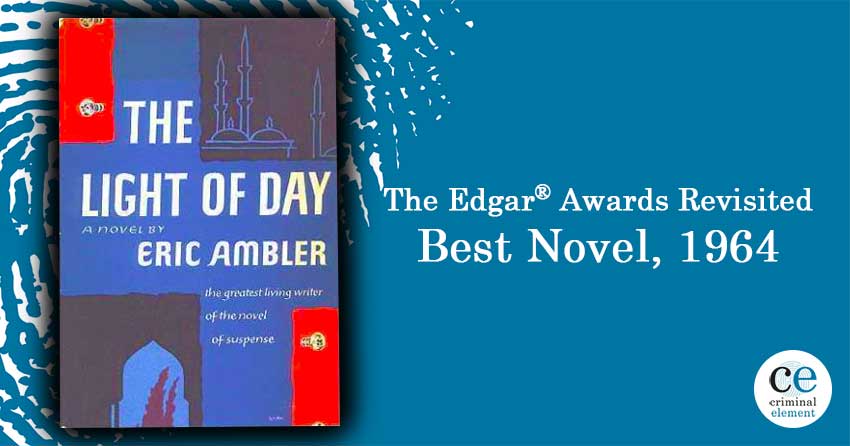 Eric Ambler’s The Light of Day was originally published in 1962 and then turned into the film Topkapi in 1964 by American film director Jules Dassin. The novel was received with rave reviews and helped cement Ambler as one of the creators of the modern suspense novel. With an international flare (which was also present in the film version thanks to an international cast that featured Peter Ustinov, Melina Mercouri, Maximilian Schell, and Robert Morley), exotic locales, and an intriguing plot where theories collide and the main character forcefully becomes a double agent to save himself from the repercussions of a crime, The Light of Day is taut thriller whose impact can still be seen in the genre’s DNA almost six decades later.

Arthur Abdel Simpson does odd jobs and has experience as a journalist, but he doesn’t think twice about committing small crimes when the opportunity presents itself. When he first sees a man named Harper in the Athens airport, he sees an opportunity: a somewhat lost tourist who’s unfamiliar with the city and would probably jump at the chance of getting around with the help of a private driver and guide. He is also the perfect victim because he’s probably carrying money or traveler’s checks. Unfortunately for Arthur, Harper is much sharper than he appears and he catches Arthur stealing three checks. After roughing him up a bit, Harper makes Arthur write a confession to the authorities and then offers him a job in exchange for his silence: he has to drive a car across the Turkish border. With no other choice and the promise of money on top of receiving the confession he wrote, Arthur agrees. His bad luck stays with him and he is caught again, this time by the police. His passport is outdated and there was something hidden in one of the car’s doors. Once again, he is given a choice: cooperate with the Turkish authorities and spy on the individuals who receive the car or get thrown in one of Turkey’s infamous prisons. The authorities fear the car’s recipients are planning a coup. Arthur thinks differently. Both are wrong. By the time Arthur learns what he’s involved in, it’ll be too late to stay safe.

The first element that pops out about The Light of Day is Ambler’s prose. Crisp and sharp, the writing in this novel never meanders into unnecessary explanations or descriptions despite changing places and countries as well as having a large cast of characters. Throughout the narrative, the author keeps the writing focused and the descriptions fast and punchy:

After a moment or two, the man led the way through a small repair shop and across a scrap yard to a row of lock-up garages. He opened one of them and there was the Lincoln. It was a gray four-door Continental, and looked to me about a year old. The man handed Harper the keys. He got in, started up, and drove it out of the garage into the yard. The car seemed a mile long. Harper got out.

The second element that makes this an award-winning novel is the tension Ambler manages to sustain throughout the story. Arthur is a scared man who’s very aware of his limitations. He knows he’s physically unprepared for many things and constantly fears for his safety, which makes him the perfect antithesis of the rough, self-assured hero seen in most thrillers. The one thing he possesses is intelligence, and that keeps him on his toes. The Turkish authorities found “twelve tear-gas grenades, twelve concussion grenades, twelve smoke grenades, six gas respirators, six Parabellum pistols, and one hundred and twenty rounds of nine-millimeter pistol ammunition” in the car’s door. These could be used for many things. The Turks think coup and Arthur thinks it’s drugs, but they are both wrong; the group Arthur ends up working for, and spying, is planning on stealing something very important and very valuable. The conflicting theories keep readers guessing, and they help infuse the novel with a lot of tension.

The third element that makes this an outstanding read is the book’s international atmosphere. While there is a lot of movement geographically speaking, the story goes above and beyond the spaces Arthur visits. There is French, Turkish, English, and Italian spoken at various moments, and while there are only a few words in different languages sprinkled here and there, they aren’t translated, and that makes The Light of Day an international narrative that is more concerned with authenticity than with adapting everything to its intended audience.

Last but not least, the secondary characters add a lot to the story. While they serve a single purpose and are thus devoid of backstories and rich narratives surrounding their existence, what they do, they do well. From helping to add tensions to providing violence, the long list of secondary characters Ambler used to populate this story are diverse and entertaining to read about. For example, Miss Lipp is an intriguing figure; the only woman in the group he joins. She is mysterious and, even if she insults Arthur on more than one occasion, her presence represents a break from the all-male cast. She is also easy on the eye, and that makes all of Arthur’s insecurities float to the surface:

Miss Lipp’s legs were particularly long, and, for some reason, that was irritating as well as exciting; exciting because I couldn’t help wondering what difference long legs would make in bed; irritating because I knew damn well that I wasn’t going to be given the chance to find out. 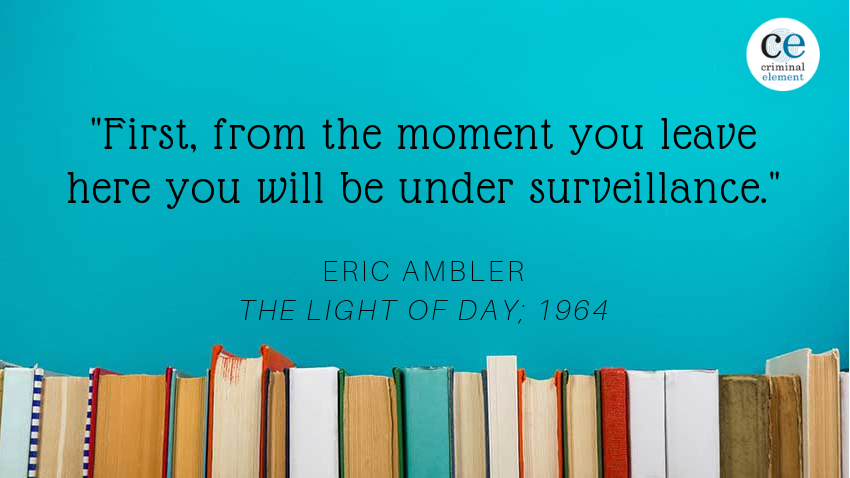 One last thing worth mentioning is that Light of Day perfectly bridges the gap between pulp and espionage. Coming in at 224 pages, this is a relatively short read with a pace that approaches that of classic pulp. Because Arthur is forced to spy and report, this is also an espionage novel, but one that is much more straightforward and quick than most others in the genre. Typically, espionage narratives deal with secret organizations, government agents, and convoluted plots. That’s not the case here. In Light of Day, clear storytelling, actual espionage, and action replace everything else. Arthur’s mission is clear, just like his instructions, and that ensures readers are always aware of what’s going on even if they ignore what the criminals are planning until the last third of the narrative:

“First, from the moment you leave here you will be under surveillance. The persons allocated to this duty will be changed frequently, but if you should happen to recognize any of them you will pretend not to. Only in an emergency, or in a case of extreme urgency, will you approach them. In that event they will help you if you say my name. You will report normally by telephone, but not from a telephone that goes through a private switchboard. Certainly not from the telephone in a hotel room. Use café telephones. Unless, for physical or security reasons, it is impossible, you will report at ten every night, or at eight the following morning if you have missed the ten o’clock call.”

Light of Day has a slightly bizarre ending that pales in comparison to everything that precedes it, but its place in crime fiction and the lingering impact the book, as well as its author, had on the genre makes it one of those inevitable novels that must be read as part of any crime fiction fan’s literary education.

Thanks again for joining us as we work our way through this list. Make sure to stop by next week when Philip Jett discusses 1965’s very famous winner, The Spy Who Came in From the Cold by John le Carré. Look for it on Friday.

Peter Vronsky’s American Serial Killers is a brutal, engaging, meticulously researched account of the start, development, and conclusion of the fifty-year period knows as the “golden age” of serial killers in the United States. While the book focuses on serial killers, Vronsky digs deep into the psychology that shapes them, tracing the development of the… 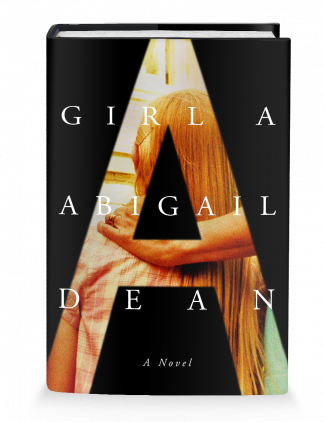 There’s something about dark narratives about dysfunctional families that pulls readers in. It probably stems from a sense of empathy mixed with familiarity. However, some stories take dysfunction into places so dark and dangerous that readers aren’t pulled in; they’re brutally dragged. Abigail Dean’s Girl A belongs to this second group. A crushing tale that…