The Edgar Awards Revisited: The King of the Rainy Country by Nicolas Freeling (Best Novel; 1967) 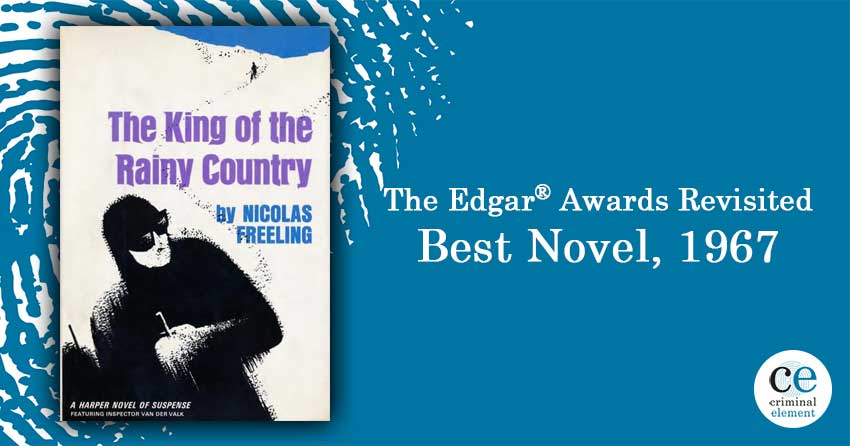 Nicolas Freeling considered himself a true European. Though born in London to English parents, he spent most of his life on the continent, an influence that shows in his fiction writing. His debut series features Inspector Piet Van der Valk, a student of history and a dogged, somewhat cynical investigator. This creation was inspired by the Dutch police inspector who interrogated Mr. Freeling after he was caught stealing meat for his wife’s dinner from the hotel kitchen where he worked as a chef. Being made an example of and deported alongside his Dutch wife, Renee, did little to dampen Mr. Freeling’s enthusiasm for his hero, though he would later, like Sir Arthur Conan Doyle decades earlier, grow weary of the character who had brought him fame and fortune, and kill him off. Unlike Sir Conan Doyle, however, he would not cave into popular pressure and resurrect his detective: instead, he let Van der Valk’s widow, the gourmet chef Arlette, take center stage in two further books. If fans wanted more traditional police procedurals, they were welcome to enjoy his mysteries featuring the Belgian Inspector Castang.

But Mr. Freeling didn’t really consider himself a crime writer insofar as he defined an author limited to the “ghetto” of genre. His books were meant to be literary and were certainly in the vanguard of novels that cared less about the whodunnit than the why. It’s no surprise then that he won several important awards during his career, including the Edgar for this sixth in the Van der Valk series.

As The King of the Rainy Country opens, our hero has just been shot, and in a delirium of pain dreams of Napoleon and Baudelaire. Several days earlier, Van der Valk had been instructed by the Amsterdam Chief of Police to look discreetly into the disappearance of forty-two-year-old Jean-Claude Marschal, heir to the Sopexique company fortune. Answering primarily to the Sopexique majordomo, a Mr. Canisius, Van der Valk has been given an expense account to aid in his search for the missing heir, a quest that leads him across Europe and through the shadows of the past, reflecting often in passages such as this:

It is fashionable nowadays to regard the last years of the Holy Roman Empire as the fall of the house of Usher. Doom, doom, doom. Waltzes play with infinite sadness through the echoing halls of Schönbrunn, the Papagenotor is wreathed in mist, a stinking miasma from the foul sluggish Danube, rank grass grows in the streets of Vienna, and the Hofburg is full of shrieking gibbering wraiths. The revolver shots of Mayerling echo at Sarajevo. We are far away from the Radetsky March on a snowy New Year’s morning, Professor Willy conducting with the violin bow, a republican crowd. Happy New Year from the Wiener Filharmoniker.

His investigations will lead him to corpses eerily reminiscent of historical events, but it is his understanding of human emotion in the present that will bring him into a rifle’s sights, as he seeks to prevent more deaths. Well, “present” I should say, as The King of the Rainy Country is very much a product of its time. The cheerful outright racism aside, a large part of the plot hinges on different forms of European temperament, painted in such broad strokes as to be almost offensively stereotypical. Van der Valk sets out to stop someone possessed of, he believes, a Romantic (think Mediterranean as opposed to Northern European) temperament that demands vengeance for honor slighted. It’s the kind of sensational motivation that modern-day mystery writers would eschew, and rightly so, as lacking in nuance.

Yet there’s a depth to this slim novel, in large part due to Mr. Freeling’s encyclopedic knowledge of European history, that cannot be denied. I found myself googling his casually mentioned people and places, and being struck not only by those previously unknown-to-me chapters of European history but also by their relevance to the fictional proceedings. I was also impressed by Mr. Freeling’s shrewd insights into contemporary policing methods and how they could be improved, as exemplified by Van der Valk’s German counterpart, Heinz Stössel, whom Van der Valk recruits in his hunt for Marschal:

His theory was that you can find anything and anyone with a routine, if that routine is only well enough co-ordinated. Police departments are increasingly fragmented and where they fail is in faulty liaison. A man looked for by, for instance, the fraud squad for a very smooth savings’ bank trick may be completely unknown to a murder squad, who would not know him even if they had him in the office as a witness. Heinz Stössel had fired arrows at every department in the organization. Faced with a man who, technically, had committed no crime at all (they had absolutely no pretext for looking up, for instance, the bank account) he had calmly assumed that the man was guilty of every crime in the penal code. He had made a list of everything he could imagine Mr Marschal doing, had virtually every policeman in Germany hunting for it, and had every report made put on his telex. Every hour, he went with his red pencil, line by line, through the reams of tape. He was looking, he said, for a co-ordinate.

This combination of the weight of European legacy with the tenacious, intellectual police work displayed by our heroes goes a long way to explaining this novel’s appeal, especially in a year where the other Edgar nominees are more familiar household names to us looking back at 1967 from the 21st century. Ngaio Marsh, Dick Francis, and Donald E. Westlake are all acknowledged masters of the genre, with canons I’ve previously sampled, but I’ll readily admit that the name Nicolas Freeling was entirely new to me before this book. And while I can see why the flaws in his storytelling have made it so that his works have faded in popularity (twenty years of British television adaptations notwithstanding,) I do believe that his focus on the so-called literary aspect of the crime novel helped open new pathways for mystery writers wanting to go deeper into the psyches of their characters, murderers, and detectives alike.

Make sure to stop by next week when author Mariah Fredericks joins us to discuss 1968’s God Save the Mark by this year’s runner-up, Donald E. Westlake. Look for it on Friday.