Doreen Sheridan weighs in on this divisive 1997 Edgar winner. 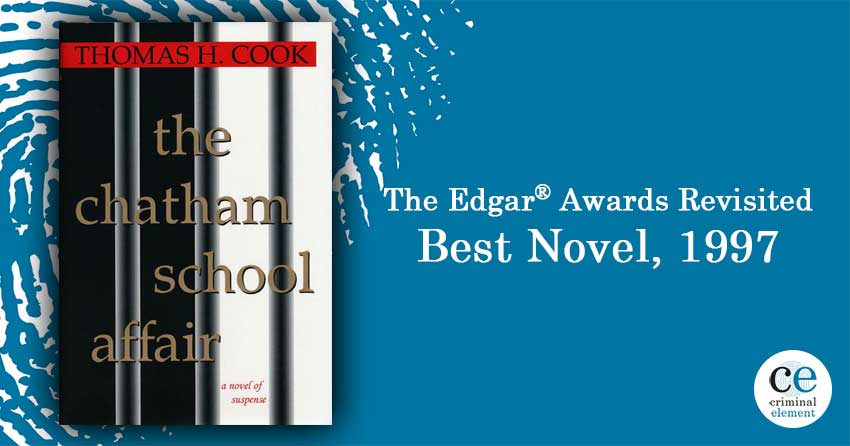 There are two kinds of readers, as far as I can tell, when it comes to 1997’s Edgar Award-winner, The Chatham School Affair by Thomas H. Cook. There are those utterly perplexed by a crime novel that moves at what they deem a glacial pace and bears contents as literary as they are mysterious, and then there are those like myself who raced through the pages, unable to stand the suspense of not knowing what really happened at Black Pond on that fateful day in 1927.

It actually took me a little while to get into the novel at the beginning, hence why I have more sympathy for the first group of readers than I might. Though written as the 20th century faded, from the perspective of an old man looking back seventy years into his past, it reads very much as a novel from the first half of the 1900s. This is both a feature and a drawback: the authenticity of manner pulls the reader firmly into the milieu, but looking back from 23 years in the future on this book that itself looks back seven decades more, it’s frustrating to regard the morality that permeates the world it’s built, even more so when you realize that the book sees itself less as a commentary on an unjust time and more as an examination, if not an exoneration, of a single young man’s actions.

Read More from the Revisiting the Edgar Awards Series!

That young man is our narrator, Henry Griswald, who in 1926 was the teenage son of the Chatham School’s headmaster. Pater is, through and through, a good man. Alas, there is nothing more inflammatory to the contrary male teenage heart than to be raised by a good man who also happens to be a mild man:

“Life is inadequate, Henry,” he said finally, his eyes upon me very solemnly. “Sometimes the most we can give, or get, is trust.” With that, he leaned forward, patted my leg, rose and went inside. Nor did he ever make any further attempt to explain what he’d said to me. But over the years, as he grew older and I grew older, I came to understand what he meant that night, that hunger is our destiny, faith what we use to soothe its dreadful pang.

I know now that my father had tried to reach out to me that night, show the path ahead, but I remember that as I watched him trudge wearily through the door, he seemed smaller to me than he ever had. I felt a malevolent wave of contempt for everything he stood for. It was swift and boiling, and in its wake I felt an absolute determination never to be like my father, never so pathetic, nor so beaten down.

Henry is your quintessential rebel without a cause until art teacher Elizabeth Channing moves to town. Beautiful and bohemian, she was raised by her father, a noted travel author, to “live at the edge of folly.” So perhaps it’s inevitable that when thrown constantly into the company of the scarred, crippled war hero turned English teacher, Leland Reed, Byronic feelings should blossom between the two. Problem is, Leland has a wife and daughter, and in 1920s America, that’s enough to make a monster out of Elizabeth in the court of public opinion, especially after the terrible events of Black Pond take their toll.

What exactly those events are and where the responsibility for what happened lies form the greater mystery of this book, as told by the older Henry looking back on his troubled youth. On being exposed to Elizabeth and Leland’s growing affection for one another, younger Henry finds purpose at last, especially when Sarah Doyle, the Irish maid who assists his mother in keeping house, confides in him her own ambitions:

I could see it in her face, a vast, billowing need to leap beyond the mundane and unglamorous life she otherwise seemed destined for, and which, since reading Mr. Channing’s book, I had also begun to feel far more powerfully than I ever had before. Watching her agitation, the restlessness that swept over her, I suddenly felt absolutely in league with her, the two of us castaways on a narrow strip of land whose strictures and limitations both appalled and threatened to destroy us.

Henry is determined to help Sarah escape a life of drudgery, and their first step is to enlist Elizabeth’s help in teaching the young immigrant girl how to read. But as that pivotal year wears on and Henry’s closeness to his teachers allows him glimpses into their tempestuous relationship, a terrible misunderstanding will open the door to murder, and place Elizabeth at the mercy of a justice system that looks shockingly draconian to our 21st-century eyes.

And that, I think, is largely why The Chatham School Affair bothered me so much. I’m just tired of seeing women punished so that men can feel terrible about it. Oh sure, at a micro level, there isn’t much that Henry can do to remedy the situation, but I find it hard to feel any sympathy for what he goes through when balanced against the fact that he isn’t one of the women who needlessly died. Boohoo for him that he got to live a long and prosperous life.

That said, I actually felt strongly for young, sullen, romantic Henry, caught in a welter of emotions captured so perfectly by Thomas H. Cook’s lyrical writing. Honestly, if this had been attempted by a writer of lesser caliber, I doubt I would have torn through this book so compulsively, or been moved to tears by that last meeting between Henry’s father and Elizabeth. The problem is that I wanted the events of 1926-7 to inform the tone more than Henry’s feelings in the 1990s. While Henry’s viewpoint as an octogenarian was necessary for sustaining narrative tension in this cleverly constructed novel of suspense, I didn’t care about his feelings one whit past the 1920s, especially since they were centered more on himself as an adult than on the dreadful injustices his younger self thought he was fighting so hard to avoid.

Read the Publishers Weekly Review of The Chatham School Affair!

It’s a pity that my animosity towards what’s essentially a plot device overpowers my admiration for the artful crafting of the mystery itself, as well as the excellent prose used to describe it. Thomas H. Cook writes beautifully, but the fact that a book about a complicit old man looking back at the wreckage of female lives won the Edgar against a field of talented female authors writing dynamic heroines only underscores how exhausting it is to be a woman in a society culturally dominated by the male experience and gaze.

We’ll see everyone back here next week as Angie Barry reviews Cimarron Rose by James Lee Burke, the 1998 Edgar Award winner of Best Novel. See you then!