Elmore Leonard's 1984 Edgar Winner, LaBrava, takes us to a gritty, seedy Miami and proves why he's one of the genre's best listeners. 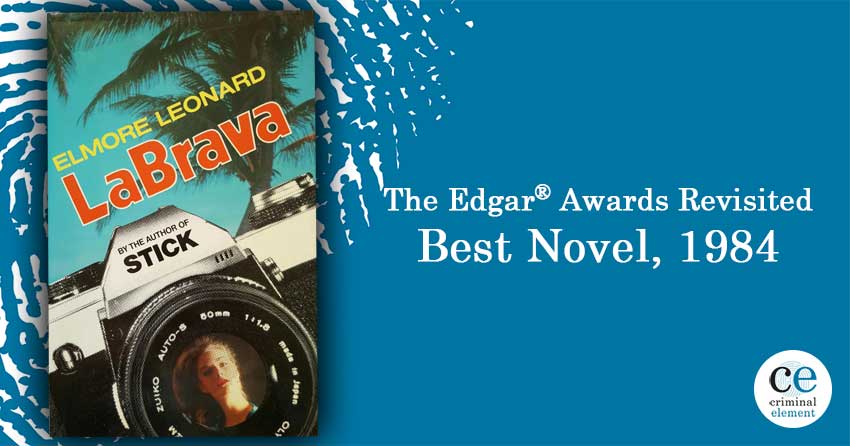 Before I go any further, a confession: This was the first Elmore Leonard novel I’ve ever read.

Of course, I knew about Leonard’s work—I’m not a complete philistine. I knew he was the master of fast, authentic dialogue. Crime fiction’s valedictorian of voice. And I’d seen the famous films made from his books, including Get Shorty and Jackie Brown.

I’d always meant to get around to reading Leonard one of these days. And LaBrava is a classic place to start in the Elmore oeuvre. His twenty-second book, in many ways this was his breakout novel. It won the Edgar, got a fantastic review in the New York Times, and set Leonard up as a respected, bestselling novelist and one of the godfathers of gritty American crime.

Man, those were the days. Imagine being given twenty-two books to break out as a novelist. The patience publishers displayed back then seems foreign to authors working in modern publishing. And a bit of patience is also required, I think it’s fair to say, when tackling this book. Leonard cruises slowly into the story, lavishing damn near a hundred pages on the set-up. Glorying in unhurried character development and in dialogue that fizzes and pops like a can of Coke you shook before you opened it.

The first quarter of the book follows Joe LaBrava, a former Secret Service protection officer. Now out of that game he’s seeking a new life in down-and-dirty 1980s Miami as a photographer. LaBrava’s just looking for some peace, but we know from page one he’s going to get dragged into the dirt sooner or later. First, though, we meet a colorful array of characters, including heavily tanned real estate investor Maurice Zola, who acts as the memory of the book, with his wistful tales of Miami in the early twentieth century when it was a glamorous getaway for millionaires and movie stars. Now it seems to him, it only attracts drug dealers, day-trippers, and pimps.

Zola gets some of the best lines. Like, “I spent all my money on booze, broads, and boats. The rest I wasted.”

Then there’s Cundo Rey, a male stripper who fled a Cuban prison and is looking for plunder on America’s southern shores. There’s also Franny Kaufman, a likable artist who makes a living selling beauty products to retirees, and Jean Shaw, a fading film star quickly running out of cash. Finally, there’s Richard Nobles, a hulking sociopath who darkens the page with the promise of violence the moment he appears on it.

Introducing this crowd takes time, and it is page 113 in my edition when Nobles finally says the fateful words to move the plot along, ‘Now, you want me to tell you my idea? How me and you can make some quick bucks while we’re waiting on the big one?’

You’d never get away with such an unhurried pace in a modern crime novel today unless you actually were Elmore Leonard. But somehow in LaBrava, it doesn’t matter. It’s the dialogue that counts. Every other line is a gut punch.

The film star saying mournfully, “I’m forty-six years old and there’s not a damn thing I can do about it.”

A criminal saying, “Jesus Christ, all my life I been in shit up to here, but never, never would I a thought you’d be the one’d push me under.”

Leonard’s ear is perfect. His ability to capture a character in one line is unparalleled. Give him three lines and that character will stay with you forever.

This is why pace isn’t everything. This is why in modern crime fiction we need to take another look at our obsession with speed.

Don’t get me wrong, page-turners have their place—God knows I’ve written enough of them. But books like LaBrava force us to slow down and wait for the story unfurl. To let the characters reveal themselves to us in their own time.

Among the books that did not win the year LaBrava was given the Edgar were John le Carre’s The Little Drummer Girl and Umberto Eco’s Name of the Rose, both of which are considered classics now. Both are books I’ve read and loved. In fact, to be perfectly honest, I came into this review with a bit of a chip on my shoulder, expecting to find LaBrava somehow inferior. How could this dingy little tale of a sociopath planning to set up a fading film star be better than those giants of twentieth-century fiction?

Reading this book changed my mind.

Leonard is a listener. An observer of human behavior. His complicated plot spools out with gradual beauty while we’re still distracted by the brilliant dialogue. When the violence erupts it’s fast and shocking enough to take your breath.

And it all feels real. Out of thin air, he creates people who walk and laugh and bleed on the page. People so real it’s hard to believe that if I go to Miami I won’t run into them. Get ripped off by them. Get stabbed by them.

For that alone, I commend the Edgar judges for daring to choose LaBrava in the year of The Little Drummer Girl. Because one thing is obvious after reading this book: it was Elmore Leonard’s time.

Fun Facts from the 1984 Edgar Awards:

Tune in next week when Doreen Sheridan takes a look at Briarpatch by Ross Thomas.