The Edgar Awards Revisited: God Save the Mark by Donald Westlake (Best Novel; 1968) 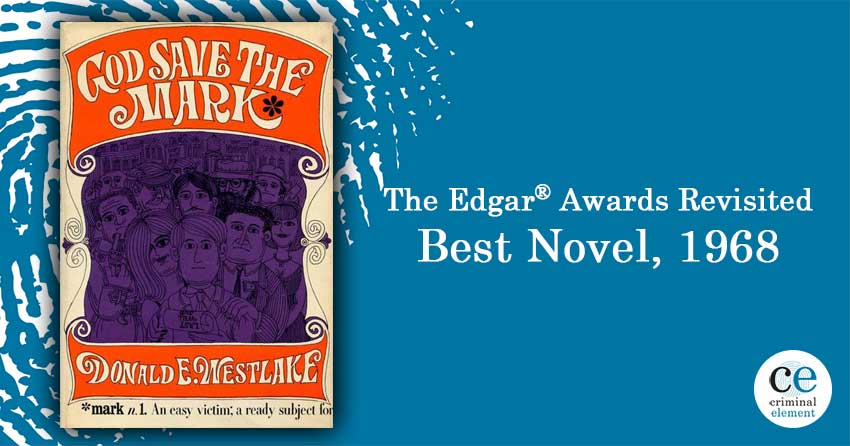 My parents were mystery readers. And when my mother died, she left behind a comprehensive library of mysteries popular in the 60s and 70s. Sayers. Le Carré. Margery Allingham. Ngaio Marsh. Most of them were British or British Empire. One lone American stood out: Donald Westlake’s Who Stole Sassi Manoon? Even as a kid, I recognized this was a different vibe. Raucous, comedic, faintly amoral—less Marple, more Marx Brothers. When my mother died, it was one of the first books I packed to take with me.

Born in Brooklyn, the insanely prolific Westlake worked solely on a manual typewriter. He boasted many pseudonyms—Richard Stark was the most famous—earned two hundred rejections before his first story was published, and wrote nearly three hundred books. In 1968, he won one of his three Edgar awards for God Save the Mark, delivering an acceptance speech that was typically short and pithy: “I don’t speak. I write. Thank you.”

As the title suggests, this is the story of a sucker. Fred Fitch, our hapless hero, is a New Yorker in the late 60s, a time when anyone living in the city might have felt like the victim of a con. A freelance researcher, Fred falls prey to every scam, trick and grift going. As the story opens, he buys a counterfeit sweepstakes ticket from a one-armed man, then pays for a COD package for a neighbor who supposedly isn’t home. So when Fred inherits three hundred thousand dollars from a long lost uncle, he becomes a target the size of a Macy’s Thanksgiving Day balloon. Shortly after inheriting, Fred is stopped in the park when “a girl with marzipan breasts flung herself into my arms, kissed me soundly, and whispered in my ear, “Pretend you know me!”

And that’s just the beginning. Begging letters pour in. Then bullets start flying. It turns out that generous old Uncle Matt was something of a con artist himself, known to the authorities as “Short Sheet.” Oh—and he was murdered. Possibly by the same people now taking shots at poor old Fred.

But in addition to his fortune, Uncle Matt has left Fred a protector, a stripper with a heart of tarnished gold known as “Gertie Divine, the Body Secular.” Tracing his steps through Uncle Matt’s twisted existence in order to find out who killed his crooked relative, Fred comes to the conclusion that his deceased benefactor swindled the Coppo Brothers. And now the Coppos want their money back. An old associate of Uncle Matt’s, a Professor Kilroy, solemnly advises Fred to donate the money to charity—it’s the only way he’ll ever get his life back. But is this really a helpful hand or just another scam? By now you know better, even if Fred doesn’t.

Westlake’s world is chock full of scam artists, both professional and amateur. Some of the funniest passages in the book involve the wide variety of spongers in Fred’s life. Periodically, he checks in on the avalanche of mail he now receives for hopefuls looking for handouts. In a sentence that goes on for two pages, he describes the latest batch:

This stack included an advertisement for a company that was bound and determined to save me money on slacks if only I would send them my measurements and choice of color, and a notice from a bunch of monks in California alerting me to the news that they intended to say Mass for me en masse every day for the next hundred years and if I wished to express my appreciation for this religious frenzy, I could use the enclosed envelope no stamp needed and a newsletter informing me that the Kelp-Chartle Non-Sectarian Orphanage of Augusta, Georgia is on the brink on bankruptcy, won’t I help…

Not an enormous amount happens in God Save the Mark. Fred’s search for his uncle’s killer is really just an excuse to careen at high speed through the seamy, bizarre realm of the city’s comic underworld of the late 60s. Where else but a Westlake novel would one of the villains be a frustrated thespian? You encounter card playing elevator men, pinochle specialists, and doctors who self-inject rather than reveal their secrets to our desperate protagonist. People drink peach brandy and the cops have names like Reilly.

Some attitudes have not aged well. When Fred encounters some gentlemen of the evening—“I knew what sex they were, but they didn’t.”—he flees what he deems a fate worse than death. But God Save the Mark has some genuinely wonderful twists and the ending is clever and unexpected. Most of all, the loving portrait of a New York when there was such a thing as rent control, genuine characters roamed the streets, and Times Square was the peep show capital of the world makes this worth reading. My friend, mystery writer Triss Stein read the book when it came out. Even then she said its appeal was of a “refreshing—funny and an unusually of-the-moment reflection of life in NY.”

Read Our Review of Mariah Frederick’s New Mystery Death of a New American!

Did it deserve to win the Edgar? I can’t say Donald Westlake is undeserving of anything. But strangely enough, God Save the Mark was up against one of my all-time favorite novels of New York City evil, Rosemary’s Baby. Like Westlake, Ira Levin gives us a good-hearted if naïve protagonist beset by a cast of memorable “wacky” types. (Actually, he too throws in that frustrated thespian. Then as now, there were a lot of them in New York.) Of course, Levin took Rosemary down a much darker path and her wacky New Yorkers were in fact demonic. I have to assume the supernatural element disqualified Rosemary’s Baby for the ultimate honor. But for sheer suspense, it might have been my pick in 1968.

Make sure to stop by next week when Criminal Element’s own Pritpaul Bains joins us to discuss 1969’s A Case of Need by Jeffery Hudson (aka Michael Crichton). Look for it on Friday.