We've entered the '70s—join Larry Clow for a celebratory lap around the track with 1970's Best Novel Forfeit by Dick Francis. 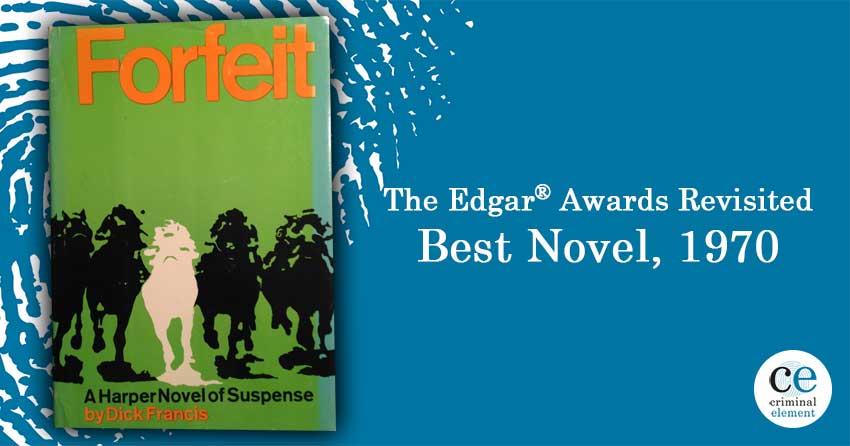 When he released Forfeit in 1969, Dick Francis was already a legend, at least among racing fans in England. As a jockey, Francis won more than 350 races between 1946 and 1957 and was Queen Elizabeth the Queen Mother’s personal jockey from 1953 to 1957. His triumphs on the track were well chronicled, as were his failures—a stunning, sudden loss at the 1956 Grand National race haunted him, and years of injuries finally pushed him to retire. Francis wasn’t one to stay down, though. He traded the track for a typewriter—he penned an autobiography in 1957, and in 1962 published his first mystery, Dead Cert. And in true fashion, he hit the ground running. By 1969, he’d already earned three Edgar nominations for Best Novel. It’s fitting, though, that Francis won his first (but by no means last) Edgar for Forfeit. The book is fast-paced, thrilling, and propulsive—qualities you’d expect from an ex-jockey turned writer. But more than that, Forfeit is a love letter to Francis’ years as a racing journalist; his wife and longtime collaborator, Mary; and the sport of racing itself. That it’s all wrapped up in sparse, pulpy prose makes the book that much more of a marvel.

Forfeit follows James Tyrone, a racing columnist for the Sunday Blaze, one of London’s more colorful Sunday papers. Tyrone’s column is similarly colorful, and he’s known as a dependable reporter or a shameless muckraker, depending on who you ask. What begins as a typical day in the Blaze’s offices winds up throwing Tyrone’s life into chaos. A glossy magazine hires him to write about the Lamplighter, a major upcoming race, and Tyrone takes the job, mainly because he always needs the money. Later, at lunch, he encounters Bert Checkov, a racing columnist at a rival paper, who drunkenly warns him, “Don’t sell your column.” But then Checkov turns up dead. And as he starts his research for the magazine article, Tyrone notices a strange connection. Checkov’s last column whipped readers into a frenzy about Tiddley-Pom, the horse Checkov predicted would win the Lamplighter. But when Tyrone meets Tiddley-Pom’s owner, he can’t figure out Checkov’s reasoning: though the horse has performed well in recent races, it’s certainly not a champion. That hasn’t stopped hundreds of gamblers from placing huge bets on the unassuming horse, though. A little digging reveals more puzzles. For almost a year prior to his death, Checkov used his column to heavily hype horses that were almost always withdrawn from their races at the last minute. It was bad news for the bettors and horse owners, but a windfall for shady betting shop owners. Checkov’s last words haunt Tyrone—who had the man sold his column to, and why did they have such a powerful hold over him? Tyrone’s investigation allows Francis to show off the skills he picked up as a longtime racing columnist for the Sunday Express, as well as his panache as a writer. Though it’s tempting to think of horse racing as a genteel sport, it’s as hardboiled as any speakeasy casino, with crooks, aristocrats, jockeys, farmers, and people from every social class imaginable rubbing shoulders, picking pockets, and trying to get ahead. Francis’s prose is economical and lyrical; his dialogue crackles with energy, wit, and character. This passage, in which Tyrone sees the shape of the betting conspiracy thanks to a generous, if reluctant source, is a great example:

Once started, he left little out. In the next half hour I listened to the detailed case histories of four more antepost favorites who hadn’t turned up on the day. All could have been bona fide hard-luck stories. But all, I knew well, had been over-praised by Bert Checkov.   He ran down, in the end, with a faint look of dismay.   “I shouldn’t have told you all this.”   “No one will know.”   “You’d get information out of a deaf-mute.”   I nodded. “They can usually read and write.”   “Go to hell,” he said. “Or, rather, don’t. You’re four behind me; you aren’t trying.” He waved the bottle in my general direction and I went over and took it from him. It was empty.   “Got to go home,” I said apologetically.   “What’s the hurry?” He stared at the letter in his hand. “Will your wife give you gip if you’re late? Or will she be running off with some bloody Yankee colonel?”   “No,” I said unemotionally. “She won’t.”   He was suddenly very sober. “Christ, Ty…I forgot.”

Francis lets us get to know Tyrone slowly—as the book opens, he’s cynical and hard-up for cash. His marriage is a touchy subject, and by the second chapter, Tyrone’s embarked on an affair with the twenty-something niece of one of his sources. At the end of the chapter, we learn Tyrone’s wife, Elizabeth, is paralyzed and that he’s one of her primary caregivers. It’s tempting to dismiss him as a cad, an unfeeling bore, but Francis doesn’t let the reader—or Tyrone—off the hook that easily. While Tyrone pieces together the book’s central mystery, Francis pieces together the layers and nuances of a relationship forged and tempered by myriad difficulties. Elizabeth’s condition is the result of polio, and Francis drew on his own life for this—his wife contracted polio while pregnant with the couple’s first child, though she wasn’t paralyzed. Francis masterfully uses small details, bits of dialogue, and short scenes to create a full, complex portrait of Tyrone and Elizabeth’s life, and it gives Tyrone a depth of character that’s uncommon for a lot of mystery protagonists. In short, Tyrone is made of stuff that’s sterner than he or the reader initially thinks. It’s hard not to think of Francis’ own life, how he continued to race despite severe injuries and crushing losses—and how, after racing, he built a new career as a writer. Francis is just as lyrical about physical punishment as he is about the quirks of human behavior, and he’s not shy about putting his protagonists through their paces. After Tyrone writes a column that broadly outlines how some underworld types are hyping up horses only to force them out of their upcoming races, a pair of goons pay him a visit. They’re not so nice and leave him in a heap:

Sense returned, as sense does. I set about the slow task of picking myself up and assessing the damage. Maybe they had ruptured nothing; I had only the big man’s word for it. At the receiving end it felt as though they had ruptured pretty well everything, including self-respect.   I made it up to the seat, and sat vaguely watching the lights flash past, fuzzy and yellow from fog. Eyes half shut, throat closing with nausea, hands nerveless and weak. No one focus of pain, just too much. Wait, I thought, and it will pass.   I waited a long time.

The writing is immediate, lived-in, even. It’s a feeling that runs throughout Forfeit. Tyrone’s interviews, the description of the races, the perspectives of the horse owners, the jockeys, the racing officials—they all feel so real, so charged with life, that it’s impossible not to be swept away. Even if you’ve never cared about racing or understood the allure of horses, Francis’s writing is so confident, his plotting so deft that you’ll find yourself tense with anticipation as the climactic race unfolds at the book’s conclusion. 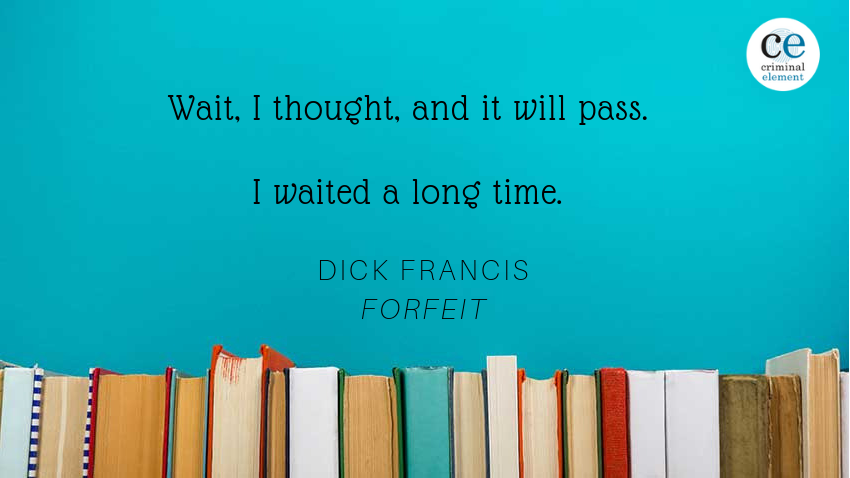 By the end of Forfeit, Tyrone has changed. He’s been pushed to the brink and come back stronger, and so has his marriage. By that same token, it’s fitting that Forfeit was the book that landed Francis in the Edgar’s winner’s circle. It’s the end of Francis’ years as a celebrity jockey and the beginning of his life as a genre institution. Francis would win Best Novel again in 1981 for Whip Hand and 1996 for Come to Grief. That same year, he was named Grand Master. Though he died in 2010, Francis’ son, Felix, carries on his father’s work. Reading Forfeit, it’s easy to see why that legacy endures.

Join us again next Friday when Abby Endler from Crime by the Book looks at 1971’s Best Novel, The Laughing Policeman by Maj Sjöwall & Per Wahlöö. See you then! A special thanks goes out to The Mysterious Bookshop for donating many of the review copies of the award-winning books. For the latest on all new releases, as well as classic books for your collections, make sure to sign up for their newsletter.
Filed Under: Dick FrancisEdgar AwardLarry ClowThe Edgar Awards Revisited