The Edgar Awards Revisited: Eye of the Needle by Ken Follett (Best Novel; 1979)

The Eye of the Needle by Ken Follett won the 1979 Edgar Award for Best Novel and would go on to sell more than 10 million copies. Hector Dejean sits down with Follett's longtime editor, Neil Nyren, to discuss the book's impact on crime fiction. 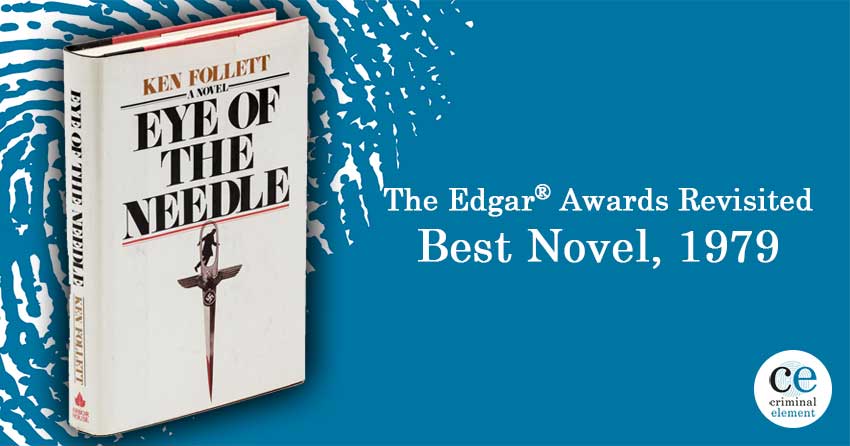 Ken Follett published Eye of the Needle in 1978, and the book achieved a level of success that few other Edgar Award winners have matched; I can only think of a small handful of Edgar winners that ascended to similar heights (The Long Goodbye, The Spy Who Came in from the Cold, and The Day of the Jackal are probably the only other books on the list to reach the same level of sales and popularity). The book sold at least 10 million copies by the author’s reckoning, was made into a film starring Donald Sutherland and Kate Nelligan and continues to engage readers today.

It’s also worth noting that the book is extremely good. Follett introduces complex protagonists, wraps the book around a real-life historical deception monumental in scale (the Allies’ efforts to deceive the Axis about the D-Day landing), paces the action carefully, then unleashes a real nail-biter of an ending. It’s not only a near-perfect example of a thriller, but it’s also a novel that seems fresh and relevant over 40 years after it was written.

Because Eye of the Needle was such a hit with the general public, I wanted to discuss its impact, on thrillers and on the publishing industry, with someone who contributed to its international success. Neil Nyren was the book’s American editor (acquiring it from Follett’s agent) and continued to work with Follett over subsequent years. In 2013, Nyren presented Follett with his MWA Grand Master Award at the Edgars Banquet. “Eye of the Needle didn’t do anything radically new or ground-breaking. What it did do was several things, all excellently,” said Nyren. “The 60s and 70s were a glorious time for wonderful new espionage writers. Ian Fleming, Jack Higgins, John Le Carre, Len Deighton, Frederick Forsyth—the market loved them and was always looking for more people like them. Follett looked like a very good bet.”

Nyren pointed out that you can’t really go wrong setting a novel in WWII. “The stories that came out of it, both big and small, were endlessly interesting, and we were still learning new things, as secrets came out. In fact, we’ve never ceased being interested in WWII stories.” One of the many memorable things in Eye of the Needle is its setting—London, and eventually the rest of England, and up into Scotland—during the war. Citizens are taking on new duties and roles to keep their country and each other safe through the bombings and enemy attempts at sabotage. Godliman and Bloggs, two men recruited by MI5 to catch German agents on English soil, illustrate their times perfectly. They are charged with an imperative purpose, but they’re also weary and battling hopelessness. Bloggs, in particular, is devastated when he loses his wife, a fearless ambulance driver. At one point he says to Godliman, where will I meet another woman as heroic? Godliman’s answer is a great sentiment and a clever piece of foreshadowing: England, he tells Bloggs, is full of heroes.

Nyren also pointed out how Follett crafted a great chase, once the MI5 agents get on the trail of Henry Faber, an inconspicuous man who is really a clever German spy known as Die Nadel. And Godliman and Bloggs identify Faber when it’s almost too late; he’s already discovered that the British have built a fake army of cardboard tanks and plywood airplanes and placed it across the channel from Calais to convince the Axis to send their defensive forces there rather than Normandy. When Faber’s initial report on this gets intercepted by MI5 on its way to Berlin, Faber has to race to the coast of Scotland to rendezvous with a U-boat there. Bloggs is often only minutes behind him, coming across the bodies Faber leaves in his wake.

“Faber was a very interesting anti-hero—smart, audacious, strangely admirable in his way,” said Nyren. “He was a stone-cold killer and you obviously didn’t want him to succeed in his mission, and yet his complexity made him an attractive character as well.”

As Follett depicts him, Faber, in his heart of hearts, is not so much a Nazi as an uncoverer of secrets—a deceiver who wants to get his hands on the truth. His discovery of the Allied deception, and his determination to expose it, with all of England trying to stop him, does indeed make him strangely sympathetic, despite his horrible allegiance to Germany and his comfort with killing people.

But if Faber wins a reluctant sympathy from the readers, Eye of the Needle has another character who is an unequivocal protagonist, one who has to battle her way through even more daunting odds, only, in her case, for a truly honorable cause. Nyren calls Lucy Rose “one of the best heroines in contemporary suspense fiction, which was basically a pretty uber-male field at the time.” What happens is, Faber misses the U-boat and washes up on an island inhabited by Lucy, her 5-year-old son, her husband, and one other resident.

The story gets even more complex when Lucy, who has been neglected by her emotionally-distant husband for years, begins an affair with Faber; as with the previous pacing of the novel, the mutual seduction moves carefully and takes its time. A lot of this part of the book is told from Lucy’s point of view, and she comes across as neither naive nor vindictive towards her husband. She’s a mistreated woman who’s needed a lover for years, and she pursues Faber with a sincere determination that matches his own to get info to Berlin.

It doesn’t come as a surprise that Lucy eventually realizes what Faber’s up to, even though he’s a master of deception and she’s passionate for him. And when this perceptive and resourceful woman puts everything together, the book closes with the story of their hair-raising confrontation. Follett, who has built his novel so expertly and paced it so patiently, now unleashes a frenzy of action. “Oh man, all hell breaks loose,” as Nyren puts it. “There are several extraordinary sequences, one after the other, as the two of them engage in a bloody duel to the death. You might not think it’d be a fair fight—Faber’s a trained killer, after all—but Lucy uses her wits, her knowledge of the island and the sea, and whatever she can set her hands on, to keep him off-balance. It’s a positively operatic last section of the book, and leaves you at the end turning the last page and softly breathing, ‘Wow.’”

According to Nyren, Eye of the Needle didn’t change the publishing game, as much as it goosed the stakes. “Editors certainly did try to find more Eye of the Needle-type books, as we always do when something hits big, but I really see it as part of a continuum—Follett being the latest of that wonderful string of suspense writers that I mentioned. We all wanted to find the next big thing. I do think that Lucy Rose, though, was an encouragement to bring strong heroines to the fore; she showed that a woman didn’t have to be just an adjunct to the hero.”

Among Eye of the Needle’s many accomplishments was the launching of a successful (and frequently surprising) literary career. But have the early books of any other Edgar Award winners aged so well?

Join us again next Friday when Tom Wickersham, manager of The Mysterious Bookshop, takes us along The Rheingold Route Arthur Maling, the 1980 Best Novel winner. See you then!