Dick Francis holds the record for most Best Novel Edgar Awards with three. 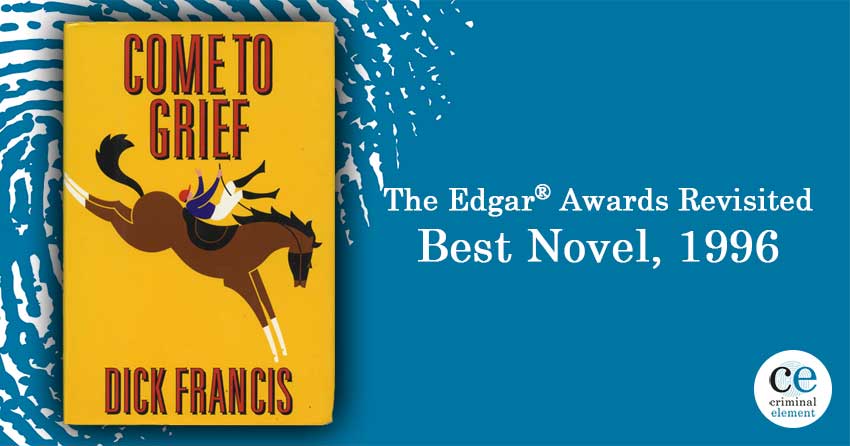 “Grief can be dangerous.” Sid Halley, one of author Dick Francis’ few recurring investigators and the protagonist of the 1996 novel, Come to Grief, says this just after having his arm broken by a vengeful widower armed with a length of pipe. It’s something Halley knows all too well. By the events of Come to Grief, the third book featuring the character, Halley has plenty of grief—he’d lost his marriage to his horse racing career, his racing career to an accident, and his left hand to complications following that accident. Though he’s established a career as a tenacious, reliable, and discreet private investigator, Halley still feels a longing for the past, a hunger for what he had before.

No matter how much he has lost, though, Halley learns there is always more to lose. It’s poetic (in a way that the unbreakable Halley would most likely appreciate) that Come to Grief, a novel about the echoing ache of loss and the ways that we hold on to, and give up, hope, was the book that earned Francis both his third Edgar Award—and the title of Grand Master—in the same year. It’s a mournful book, one that is smart in surprising ways about the flavors of loss, the perils of nostalgia, and how hope accretes little by little when someone stubbornly insists on moving forward.

As Come to Grief opens, Halley has already solved the book’s central mystery. During the last few months, someone has been roaming the English countryside and lopping the feet off of promising young horses. Thanks to some lurid tabloid reporting and breathless TV specials, the crimes have captured the nation’s attention. Linda Ferns, the mother of Rachel, a young girl with leukemia whose horse was one of the maimed colts, hires Halley to find the villain—and hopefully put an end to Rachel’s nightmares and raise her spirits.

The grisly crimes give Halley, and by extension, Francis, an opportunity to meditate on the allure of horses. If, like me, you’ve never quite understood the fascination, you’ll leave Come to Grief with an idea about the strong connections humans and horses forge, thanks to passages like this:

Horses lived in a parallel world, spoke a parallel language, were a mass of instincts, lacked human perceptions of kindness or guilt, and allowed a merging on an untamed, untamable mysterious level of spirit. The Great God Pan lived in racehorses. One cut off his foot at one’s peril.

Halley’s investigation proceeds quickly. To his mounting horror, all the evidence points to one of his close friends, a fellow ex-jockey who’s gone on to become a beloved TV news host and society celebrity. Come to Grief begins at the end—the suspect’s been arrested, but now it’s up to Halley to poke holes in the alibies that look like they’ll get the case thrown out of court.

Of course, it’s more complicated than that. The suspect’s mother commits suicide, and the suspect’s father stalks Halley, first breaking his arm and later hoping to finish the job he started with the lead pipe. Meanwhile, Halley’s conclusions have made him a national pariah, ridiculed in the tabloids, shunned by his old racing friends and contacts, and, perhaps most painfully, rejected by Linda and Rachel, with whom he’s forged an unlikely friendship.

Halley drives from London to Liverpool, from bustling cities to quiet country estates, and the miles give him time to mull uneasily all that he’s lost. It’s not just his career as a jockey (and the intoxicating highs that came with it), or even his left hand (replaced recently with a state-of-the-art prosthetic)—Halley mourns his lost marriage, his relationship with the book’s prime suspect (who is named early on, but who I’m keeping secret for the sake of spoilers), the childhood he never had, and, through Rachel, the family he wasn’t able to build.

Francis isn’t content with just making a book about personal loss, though, and each piece of evidence is an avenue that leads to a societal change. Old ways of life, old art forms, old customs, they’re all disappearing. Halley himself comes equipped with a cell phone and a mid-90s-state-of-the-art home internet setup. Life races forward and there is no finish line, just changes in scenery that happen so rapidly as to render the future unrecognizable. As Halley observes while pursuing a lead in Liverpool:

The historic docks of Liverpool’s Mersey waterfront had long been silent, the armies of tall cranes dismantled, the warehouses converted or pulled down. Part of the city’s heart had stopped beating. There had been bypass surgery of sorts, but past muscle would never return. The city had a vast red brick cathedral, but faith, as in much of Britain, had dimmed.

In the hands of another writer, all this would be dour and gruesome but without any sense of urgency. But Francis is both a keen social observer and a remarkable writer. Dismissing his prose is a mistake. What other writer could, in three short sentences, conjure up so sharply a rainy London afternoon like this?

The bars were crowded. Umbrellas dripped. The brave colors of June dresses hid under drabber raincoats and only the geraniums looked happy.

That skill alone, along with two previous Edgar wins and three other nominations, is enough to earn Francis the title of Grand Master. But even more so, Francis, like so many other mystery writers before him, knows that hope lies at the heart of genre’s darkness. Come to Grief is a kind of testament to how powerfully defiant justice and hope can be in the face of banal evil, and Sid Halley is the avatar of that idea. As the book’s villain says after cruelly torturing Sid:

“This man is not funny. Everything that has gone wrong is because of him, and don’t you forget it. It’s this Sid Halley that’s going to ruin you, and if you think he doesn’t care about what I’ve just done … if you think it’s something to laugh at, I’ll tell you that for him, it’s almost unbearable…but not unbearable, is it, Sid?” He turned to ask me, and told Yorkshire at the same time, “No one yet has invented anything you’ve found actually unbearable, have they, Sid?”

Francis never makes Sid Halley superhuman—he’s fallible and often wrong, often unsure that what he’s doing is right, but always ready to do what’s necessary. Though bent and bowed, Halley is never broken, and it’s that stubbornness that both drives the book forward and makes him such a memorable character.

As the book ends, Halley yields to grief, but, more importantly, also lets it go. Grief is dangerous, a seemingly unmovable weight, sure, but Francis shows that, like all things, it’s also fleeting. Only the hope of a second chance persists.

We’ll see everyone back here next week as Doreen Sheridan reviews The Chatham School Affair by Thomas H. Cook, the 1997 Edgar Award winner of Best Novel. See you then!