The Edgar Awards Revisited: Beat Not the Bones by Charlotte Jay (Best Novel; 1954)

We're revisiting every Edgar Award winner for Best Novel. Up first is the inaugural winner: 1954's Beat Not the Bones by Charlotte Jay. 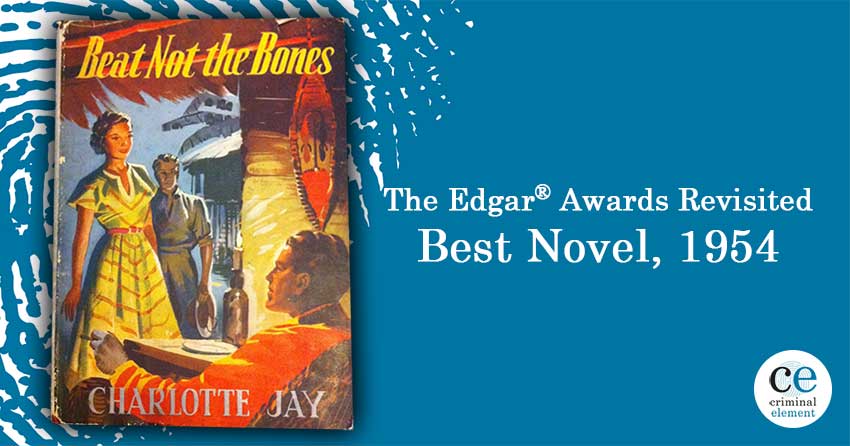 Five years ago, through some good luck, I began working for Criminal Element. It wasn’t the destination I had in mind when I started my job search, but after an interview for a role where I wasn’t quite a perfect fit, my interviewer said he might have a different opportunity for me. Enter Criminal Element. In the five years since I’ve fallen in love with this website. With this genre. With this community. I’ll admit, I came into my first day not knowing much at all about crime fiction. I had read a few mysteries and thrillers: some Dan Brown and Stephen King; a little Robert Ludlum. But never any classics like Arthur Conan Doyle, or Agatha Christie, or Raymond Chandler. And it was overwhelming at the start, trying to keep straight the differences in subgenres and authors and series. But like anything else, as I spent more and more time immersing myself in the genre, it started clicking. And before I knew it, I was in love.

I want to be clear: by no means do I pretend to be an expert in crime fiction. I’m far from one. But I am a fan, and I’m forever hungry to learn more – which is why I’m so excited to announce this new series we’ll be running on Criminal Element. Starting today, we’ll be re-reading every book that has won the Edgar Award for Best Novel. There will be a variety of people stopping by and writing reviews: authors, editors, booksellers, and bloggers, and we’ll be posting a new review every Friday. You’ll probably recognize most of the winners, and will probably have read a decent amount of them, but there will undoubtedly be some novels and authors you’ve never encountered. Which brings us back to learning. I hope that as this series progresses, you’ll find some new books to check out, new voices to learn from, and a greater appreciation of the genre that continues to impact so many readers.

Okay, without further ado, let’s get into the Edgar Awards. Given out by the Mystery Writers of America – the premier organization for mystery and crime writers, both established and aspiring – the Edgar Awards have been around since 1946, but 1954 marked the first time an award was given out for Best Novel. Prior to that, just Best First Novel was awarded, among various radio, film, and television categories, plus an award for Outstanding Mystery Criticism (awarded first to Anthony Boucher). (For some fun, check out the Edgar’s database.)

In a 1974 edition of The Third Degree (MWA’s newsletter), Dorothy B. Hughes reminisced about how the Edgar Award came to be:

It was yet another step in dignifying the mystery writer, in enhancing his work, and let’s face crass materialism… anything that enhances the author and his work means more money in his pocket.

Between 1946 and 1954, MWA added awards for Best Play (The inaugural award went to Detective Story by Sidney Kingsley in 1950.), Best Short Story (“Diagnosis: Homicide” by Lawrence G. Blochman; 1951), and Best Television Episode (The Web by Franklin Heller; 1952). In 1953, the first Raven Award was given to E.T. Guymon Jr. for his outstanding library of mystery literature. And then, after the ongoing debate as to whether it was possible to actually narrow the entire field of published books down to winners and nominees, the MWA decided to officially add the Best Novel category in 1953.

That brings us to the very first Best Novel winner: Beat Not the Bones by Charlotte Jay – a book and author still relatively unknown today (Beat Not the Bones has a mere 110 ratings on Goodreads). There are no other nominees listed online for the inaugural award, so we do not know what other books it was judged against.

Charlotte Jay – originally Geraldine Mary Jay – was born in 1919 in Adelaide, Australia. After graduating from university, she worked as a secretary in various cities around Australia and in London. In 1949, she worked as a court stenographer in Papua New Guinea, and in the 1950s, she lived in Pakistan, Thailand, Lebanon, India, and France. Jay has confessed to growing confused at her national identity during her writing days – American reviewers referred to her as British, the British called her Australian, and the Australian reviewers mostly ignored her. Fittingly, her books mirrored her life and are all set in foreign lands such as Pakistan, Japan, Thailand, England, Lebanon, India, and in the case of Beat Not the Bones, Papua New Guinea.

In an interview with Twentieth Century Crime and Mystery Writers (St James Press, 1985), Jay described her motives and methodology of writing mysteries like this:

I began writing mystery stories largely because of my delight in the novels of Wilkie Collins and Le Fanu and the stories of Poe. I read these books with terror and fascination… When my first books were published, most of the crime stories at that time were written by skilled writers of crime and detection, usually with a well-born ex-Oxford or Cambridge amateur as the private detective as the central character… In America, the same fashion prevailed along with crime stories following in the tradition of Dashiell Hammett and Raymond Chandler. I knew I could not compete with the excellent exponents of these varied trends… And I had no interest in doing so. I set out to frighten and mystify my readers by asking them to identify themselves with a character battling for survival in a lonely, claustrophobic situation.

Beat Not the Bones is undeniably a mystery novel, but it also doubles as an early example of anticolonial literature by providing us the point of view of Stella, our likable, determined protagonist. Stella is Australian, and up until the beginning of the novel’s timeline, she lived permanently on the mainland. But then her husband, who works for the Australian government in Papua New Guinea, is found dead. It looks like a suicide, and the bureaucratic officials on the island are all too content with calling it just that. But Stella knows her husband. Knows he would never commit suicide. Aware that no one will properly look into his death, she flies to Papua New Guinea and sets out to discover what truly happened to her husband when his body was found deep in the jungle. With all the telltale signs of a worthy mystery and a unique, vividly portrayed setting, it’s easy to see why Beat Not the Bones was awarded Best Novel by the MWA. What’s surprising, however, is how politically charged the book reads. Filled with despair and corruption directed towards the island’s natives, Jay is highly critical of the white administration. Jay never succumbs to preaching, instead allowing the criticism to flow naturally through the book’s characters and their interactions with Stella. The Australian administrators feel a variety of ways towards to the natives – some feel pure hatred, most others emit a patronizing superiority – and it’s easy to connect the dots between the way Jay’s characters act and the way contemporary racism has evolved since the book was published. Characters who claim to be sympathetic towards the natives have no issues saying that they’re not like other people. They liken the death of a native to something natural, much less serious than the death of a white person. In short, they’ll justify anything as long as it keeps the natives at the bottom of the societal ladder.

Beat Not the Bones is a worthy book to kick off the Best Novel Edgar Award. Thematically, it’s surprisingly modern, and yet it also dutifully serves as a historical adventure. You’ll root for Stella as she ventures deeper and deeper into both Papua New Guinea’s political machine and its foreboding jungle. And you’ll wonder why Charlotte Jay is not more of a household name. Now that’s a mystery.

Some fun notes from the 1954 Edgar Awards:

Thanks for taking the time to read all the way through, and I hope you’ll stick around as we continue the series next week. You might not have heard of Charlotte Jay before today, but I can guarantee you know 1955’s winner. Up next: The Long Goodbye by Raymond Chandler.