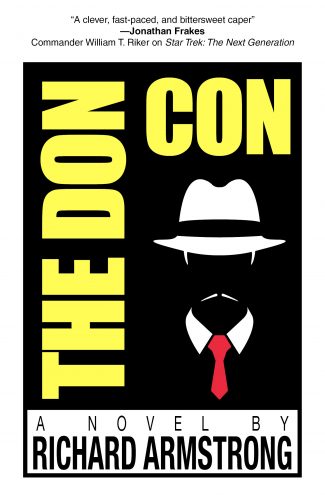 In Richard Armstrong’s The Don Con, Joey Volpe is a bit of a has-been. He’s broke and unemployed after his short-lived appearance on The Sopranos, and his life only gets worse when a real mobster shows up in his autograph line and makes him an offer he can’t refuse.

“So how much cash is a star’s assistant carrying after all four autograph sessions?”

“I don’t know. Ten thousand. Twenty thousand. In the case of someone like William Shatner or Patrick Stewart or even George Takei, it could be even more.”

“So, for the sake of argument, let’s say they’re each carrying up to twenty grand and there are—what would you say?—fifty actors at these things.”

“At a big convention, yes.”

“So that’s a million bucks in cash. You can see why my associates and I would find this interesting. Can I ask another question?”

I almost said fire away, but thought better of it. “Sure.”

“Well some do. But for most of us, it’s just another expense and hassle. As the technology improves, I suppose more actors will start doing it. Five years from now, maybe everyone will take credit cards. But for now it’s easier to ask for cash.”

“All that cash walking around with no security in sight.”

“But there are security guards around here, Mr. Rosetti. Don’t you remember the one who stopped you from following me into the panel discussion?”

“Oh, yeah, I know. I’ve checked them out. There are a couple of dozen of them. Most of them look like low-wage melanzane who don’t know what the fuck they’re doing. If they ever had to draw their guns, they’d shoot themselves in the balls.”

Melanzane was the Italian word for eggplant. You can figure out what he meant. I won’t dignify it with an explanation.

“The biggest problem is the checkpoint outside the exhibit hall,” he said. They’ve got a big security station there like at an airport. Metal detectors. X-ray machines. Conveyor belts.”

“Not only that,” I said, “they go over every ‘weapon’ with a fine-tooth comb. These fans come in with swords, light sabers, sci-fi laser guns, and all sorts of shit. There are a bunch of experts who check out each of them to make sure it can’t fire real bullets. Or real lasers. Those rent-a-cop security guards may be nothing to worry about, like you said. But I get the impression the guys who examine the weaponry know their stuff. I bet they’re ex-cops or firearms experts of one kind or another.”

I couldn’t believe I was participating in this conversation!

“That’s my take on it exactly,” said Rosetti. “That’s where you come in, my friend.”

He glanced at the waiter and, using nothing more than his eyes, indicated my champagne glass needed filling. The waiter scurried over to our table and started pouring champagne in a heartbeat.

“Wait, Mr. Rosetti, Tony, I’m just an actor. I don’t know what the heck you have in mind, but I don’t want any part of it. This whole conversation is making me feel uncomfortable. I should be going now.”

I tossed my napkin on the table and started to stand up.

“No, no, no, sit down. Finish your steak. Then we’ll order some dessert. Gotta polish off this bottle of champagne, too. Probably cost the manager three hundred bucks. It would be an insult if we didn’t finish it, and I can’t drink it by myself.”

I sat down grudgingly. I reached for my champagne and guzzled it in one gulp. No sooner had I put it down on the table than the waiter appeared at my side and refilled it. So I guzzled it again. And the waiter filled it again.

“You can’t drink it by yourself either,” said Rosetti.

We were silent for a long time. But as the champagne went to my head, I felt myself getting braver.

“Let me ask you a question, Don Rosetti.”

“I said call me Tony, please.”

“Okay, Don Tony, let me ask you a question.”

“Isn’t this kind of crime a little, I don’t know, demeaning for the Maf . . . er, for a member of your organization? I mean this is basically a rip-and-run you’re talking about. I thought you guys were more sophisticated than that.”

“Times being what they are,” said Rosetti, “we’re willing to make money using any illegitimate means available to us.”

I’d heard the Philadelphia mob was like the gang that couldn’t shoot straight compared to New York, New Jersey, and Chicago—even in the glory days of organized crime. Still, it was hard to imagine they would stoop to stealing from geeky girls dressed like Wonder Woman.

“What exactly does your business consist of nowadays, Tony?”

“Between the government and the internet, there’s hardly anything left of our traditional businesses.”

“I’m talking about those so-called payday loan companies Nowadays, the government lets them charge more vigorish on a loan than we ever did. And if you don’t pay them back, they take your house. Disgusting.”

“What about sports betting?” I said. “Casinos aren’t allowed to take bets on sports except in Las Vegas.”

“For the time being. That may change soon. Meanwhile, the offshore internet casinos can take bets on sports. Fortunately for us, the big punters don’t trust their hundred-grand bet with some computer casino in Cameroon. So we hang on to some of the big-money sports betting.”

He cut off a piece of steak and chewed on it for a moment, staring off into space—as if he could see the future of his industry and didn’t like what he saw. “But it’s a risky business,” he finally said. “There are easier ways to make a living.”

“Like ripping off geeks and nerds in Spiderman outfits?”

“I’m not as interested in the geeks and nerds as I am in the stars. They’re the ones who are carrying around all the cash. What did we say it was? A million bucks? That’s a lot of money for ten minutes work and three guys to pull it off. Plus, my guys tell me there are Fan-Cons all around the country. All around the world. They say that every weekend someone is holding one of these silly conventions. You do the math.”

“Let’s just say it could be a lucrative enterprise. But we need to try it out first. A test case. What do they call it in business school? Put it into the beta phase. That’s it.”

The dinner was confirming what I suspected from the start. Despite his rough edges and thick Philadelphia accent Tony Rosetti was no one’s fool.

“Well, Tony, it all sounds interesting. But you can count me out.”

“Because I’m not a crook, that’s why. No offense intended. I’m just an actor.”

“It’s your acting skills I need. Think of it as an acting job. Non-union, of course.”

“What do you want me to do? Point a gun at my fellow actors while you empty their pockets?”

“No, no, no. Nothing like that. I just need you to help us with the security problem, that’s all.”

The waiter filled our champagne flutes and water glasses. Then he tidied up a bit. Meanwhile, Rosetti and I stared at each other in silence.

Although he had struck me as being surprisingly genteel and well-mannered throughout the dinner, he suddenly did something rather crude. He picked up the bone of his porterhouse steak in his hands and began to rip and tear the remaining flesh off it with his teeth like a dog. Or a wolf. After he had picked the bone clean, he dabbed his chin with a napkin and smiled at me. “I’m not sure you understand how we work in our business.”

“You just explained it to me.”

“I didn’t explain it enough, obviously. You’re an actor. So you must like movies, right? Have you ever seen The Godfather, Joey?”

“Of course. But have you? You said you never watch television or go to the movies.”

“Come on, Joey. Do you think someone like me has never seen The Godfather?”

“Whatever.” Having tried reluctance, righteousness, and anger to no effect, I thought I’d give petulance a whirl.

“Do you remember when Don Corleone said, ‘I’ll make him an offer he can’t refuse?’”

“He never actually said that. Michael said it when he was telling his fiancée a story about his father.”

“Well, my offer is sorta like that,” said Rosetti.

He made a typical Italian gesture with his hands that meant just so. In fact, it was the kind of gesture Marlon Brando himself would make as Vito Corleone.

“Well, you’re wrong about that, Mr. Rosetti. I can refuse. And I do refuse. I want no part of it.”

“Joey, let me be frank with you. When a person in my position makes a business proposition to someone, it’s not a yes-or-no deal. It’s just a yes deal, if you know what I mean.”

“What about my business proposition? Can I count you in?”

“No, you cannot. Look, Mr. Rosetti, congratulations on your new business. I wish you well with it. It doesn’t bother me what a man does for a living. Just so long as your interests don’t conflict with mine, I’ve got no problem with it. But I want no part of it.” (I didn’t realize it until later, but I’d just quoted The Godfather myself.)

“I’m just an actor,” I continued. “I’m not a common thie . . . I mean, I’ve never been involved in illegal activities. Thanks again for dinner. And good night.”

I stood up and walked away, half expecting to be shot in the back as I did.

But no shots were fired, and the convention ended without me running into Rosetti again. In fact, I didn’t hear another word from him.

Until a few days later when he had his goons mug me on the street and kidnap my dog. Then he called to threaten me and my family over the telephone.