The Descent of Monsters: New Excerpt 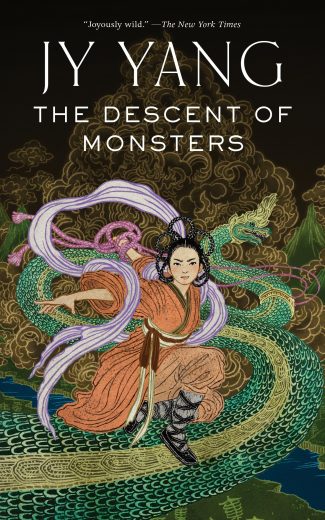 The Descent of Monsters

The Descent of Monsters by JY Yang is the third volume in the Tensorate novellas, where an investigation into atrocities committed at a classified research facility threatens to expose secrets that the Protectorate will do anything to keep hidden.

You are reading this because I am dead.

Something terrible happened at the Rewar Teng Institute of Experimental Methods. When the Tensorate’s investigators arrived, they found a sea of blood and bones as far as the eye could see. One of the institute’s experiments got loose, and its rage left no survivors. The investigators returned to the capital with few clues and two prisoners: the terrorist leader Sanao Akeha and a companion known only as Rider.

Investigator Chuwan faces a puzzle. What really happened at the institute? What drew the Machinists there? What are her superiors trying to cover up? And why does she feel as if her strange dreams are forcing her down a narrowing path she cannot escape?

To My Beloved Kayan

You’re reading this because I’m dead. That’s right, I’m doing that thing you hate in the weeklies you read, writing a last letter to my beloved because I expect to die. And my expectations have been excruciatingly accurate of late, so I’ll be surprised if I have to trash this. Surprised, and embarrassed.

But don’t worry—death circling overhead hasn’t turned me into a sentimental fool. This is not some misbegotten love letter or ode to a life unlived. As if I’d write that kind of horseshit.

Fuck that. This is a call to arms. This isn’t me feeling sorry for myself. I am burning with fury at the injustice I have encountered.

You were right, Kayan. You said that this job would kill me someday, and it has. Your prize is losing the only person who’s ever meant anything to you. Congratulations.

You remember my last letter to you? The one where I told you about the mountain disaster case I’d been given? Remember I said it smelled rotten? It was. That case went sour, real fast. The fruit was putrid to the core. Some news must filter out to your boat even on the unforgiving slush of the Demons’ Ocean, so you might have heard that the investigation closed recently, with all the blame pushed to the Machinists. Of course that shit isn’t true. The report carried my name, but neither my approval nor my complicity. Well, fuck. I guess it had my complicity. But I signed off on that heap of stinking lies to get them off my back. Since then I’ve been chasing the truth across the slimy underbelly of the Protectorate because the fortunes will cut off my tongue and hands before I let this stand unchallenged.

Well my love, it’s been days of wading deeper and deeper into foaming sewage. There’s a madness at the bottom of all this and I fear I haven’t even looked it in the face. The shit that’s gone down here is stranger than I could have ever imagined.

No doubt the Protectorate will spend the next few days smearing me as a traitor, a barbarian, a Kebangilan reprobate who couldn’t help but revert to her uncivilized nature despite her Kuanjin upbringing. All their usual nonsense—we know how they work, don’t we? I’ve worked for them for a dozen years, after all.

But you, my love—you will know the truth. Look. Here are the compiled journals, notes, and memos I’ve stacked up over the past few weeks. I suspected all along—hell, I knew—that it was all going to end in flames. Read these things. Read them, and understand what I’m sacrificing myself for. Read them, and then get fucking livid, like I did. Follow this gravesent affair to its bitter end. Anything else would be rank injustice, and I know how you feel about that. I trust you.

I know you’re going to make them pay.

Here begins the preliminary report into the so-called Rewar Teng Incident, compiled by Tensor Chuwan Sariman. On this fourteenth day of the seventh month of the year 1162, I declare the investigation into the aforementioned incident open. By the grace of the Protector and the powers invested in me by the Ministry of Justice, I will lead the investigation into what happened on that terrible day. Where there was a jungle of fear and uncertainty, there shall be the shape of hidden things revealed. Where there were storms of lies, there will be truth. No expense shall be spared, no question left unanswered. The special investigation I lead will be relentless in the pursuit of justice, and whatever obstacles are determined to come my way should take heed, for I shall be merciless. No ocean, nor mountain, nor burning fire shall deter me. My will is absolute and my mandate clear. I will not rest until the reality of what happened is laid bare. And all my efforts shall not go to waste, for through understanding the tapestry of circumstances that led to this tragedy, we shall prevent it from ever happening again.

On the fourth day of the seventh month, it was registered with Senior Tensor Chu Xinyang of the Academy that the Rewar Teng Institute of Experimental Methods had failed to send in their weekly report and list of supply orders, as they had been due to. Further investigation revealed that family and acquaintances of institute staff had not been able to contact them for the past five days, although that had been attributed to ill weather, as the monsoons had destroyed a relay tower in the Mengsua Pass and disrupted land communications. But the storms passed, and still the silence persisted. On the sixth day of the seventh month, Tensor Chu dispatched a team northward to make contact with the institute and find out what happened.

Upon arrival at the institute, the special group found waiting for them a scene of disaster. The premises were a sea of blood and bones, and of the forty-two Tensors who had been registered to work at the Institute, there was no other sign. A swift and thorough investigation of the site drew a clear and unfortunate conclusion. All the residents of the Institute had been killed, both human and animal, and furthermore, it had been one of the Institute’s experiments that was responsible for the massacre.

The culprit was determined to be one of the large raptor-naga crossbreeds, whose carcass was discovered in the caverns beneath the Institute. Unlike the other bodies on the premises, the crossbreed was found freshly slain, the blood still liquid. With an abundance of wisdom, Tensor Yesai, who had been leading the team, determined that either survivors remained of the Institute’s staff, or that there were interlopers on the premises.

An armed search was immediately carried out, and the team discovered two outlaws hiding within the caverns, the Machinist terrorist leader Sanao Akeha and a female companion whose identity has yet to be determined. They were swiftly apprehended and taken into custody, and the institute secured.

Teams are on site to recover and process evidence that will unlock the truth of the incident. All forty-two residents of the institute are presumed deceased, pending identification of their remains. (Tensor Yesai’s overall report can be read appended to this document.)

THE HISTORY OF THE INSTITUTE

The Rewar Teng Institute of Experimental Methods was founded by Tensor M in 1148. Originally called the Rewar Teng Breeding Laboratory, it began operation under the authority of the Institute of Agricultural Development, with a personnel strength of eight. The site, high in the Longfong mountain range, was chosen due to its proximity to the Rewar Teng Slack anomaly, which produced deformations in the Slack useful to experimental procedures. In its early days, the laboratory focused on modifying large southern species to be more resistant to heavier gravity in the north. As a result of its successes, the laboratory was expanded to a personnel strength of twenty-five in 1152, and registered as a separate institute under the auspices of Tensor Sanao Sonami, who was then Agricultural Minister. Additional holding pens and animal handling facilities were built, and the compound was extended to include two new buildings and a dormitory. Tensor M retired in 1157, at which time Tensor R was nominated to head the institute by the Minister.

THE SCOPE OF THE CURRENT INVESTIGATION, AND PROPOSED METHODS

Our knowledge of what happened that day lies in tatters, incomplete and fraying. In order to stitch them back into whole cloth, the investigation must find the answer to these questions:

How did the crossbreed escape its bonds? Was it through caprice or malice that it was loosed upon the institute?

What safeguards did the institute have against such an eventuality? How were these safeguards breached? Did procedural lapses play a part? Or were the safeguards simply inadequate?

How were the outlaws involved in this incident? Can their presence at the site after the disaster be mere coincidence?

Why did five days pass before the extent of the disaster was made known? What protocols can we put in place to ensure a more timely response?

How can we prevent the same from happening again?

JY Yang is the author of The Black Tides of Heaven and The Red Threads of Fortune. They are also a lapsed journalist, a former practicing scientist, and a master of hermitry. A queer, non-binary, postcolonial intersectional feminist, they have over two dozen pieces of short fiction published. They live in Singapore where they work as a science communicator and have an MA in creative writing from the University of East Anglia.