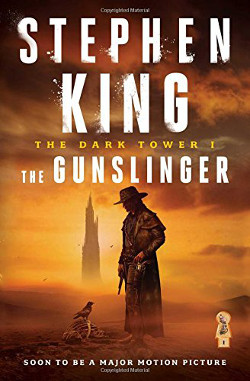 Though our journey is long, we've kept a steady momentum with a great discussion of Chapter 2! An oracle once told me we'd hold long palaver this week for Chapter 3.

The plan is to read a chapter a week, and each Tuesday we will meet to discuss major themes, motifs, and reactions. Make sure to bookmark the HQ page for the schedule and links to all of the chapter discussions as they go live! This is a short chapter but a meaty one, so let's continue our journey with Chapter 3 of The Gunslinger:

Chapter 3: The Oracle and the Mountains

I had been wondering when we would get to a few names that King had sprinkled throughout the first couple of chapters. We’ve heard about this Susan, or Susannah, and though she only appears in a distorted dream that Roland has at the start of the chapter—so we can’t be sure what’s factual—it’s certain this was a relationship that was important in his life. The dream further degenerates into what we can presume is foretelling:

The boy was looking down at him from a window high above the funeral pyre, the same window where Susan, who had taught him to be a man, had once sat and sung the old songs: “Hey Jude” and “Ease on Down the Road” and “Careless Love.” He looked out from the window like the statue of an alabaster saint in a cathedral. His eyes were marble. A spike had been driven through Jake’s forehead.

The gunslinger felt the strangling, ripping scream that signaled the beginning of his lunacy pull up from the bottom of his belly.

Upon waking, Jake is gone. Roland finds him at the altar of an oracle/succubus. Using the jawbone extracted from the last demon he encountered, he frees the boy from the oracle's spell and takes him back to their camp. Instructing Jake to keep the jawbone close for protection, Roland ingests some mescaline and goes back to the oracle.

I find it mildly amusing that he has to brace himself with a drug to go the distance with this oracle in his quest for answers. Still, our gunslinger perseveres to hear the oracle prophesize about the three: a man possessed by a HEROIN demon, a woman who “comes on wheels,” and the man in black talking to him about the tower. She also lets Roland know that if he turns back from his hunt for the man in black (who, the oracle explains, has eaten Marten’s soul) and no longer searches for the Dark Tower that Jake’s life will be spared.

I’ve been thinking that Jake’s safety is hanging by a thread. First, we know that he has died in our world when the man in black pushed him in front of a moving car, and then he just happens to be residing, a little too conveniently, at that way station when Roland came along. King writes that Roland feels love for the child but his Captain Ahab obsession for the Dark Tower—well, let’s just say, I don’t see this eleven-year-old slowing down Roland from his goals.

And Jake senses it. He condemns him, in a manner of speaking, by saying, “He killed me the first time and you’re going to kill me this time. And I think you know it.”

At last, Roland sees his prey and does what comes natural: pulling his weapons and firing.

A spray of granite puffed over the head of the man in black; a second to the left of his hood; a third to the right. He had missed cleanly all three times.

The man in black laughed—a full, hearty laugh that seemed to challenge the receding echo of gunshots. “Would you kill all your answers so easily, gunslinger?”

After twelve long years, the man in black promises to talk “on the other side” and goes into the cleft of the mountain. Roland’s compulsion overcomes when he gruffly asks the boy if he’s going to follow or stay. King writes, “That was the moment at which the small figure before him ceased to be Jake and became only the boy, an impersonality to be moved and used.” So the search for the man in black, and ultimately the Dark Tower, supersedes any one person’s life to the gunslinger.

What do YOU think about Chapter 3 and what the oracle has told Roland? Will Jake make it through the gunslinger's quest? Head to the comments and start/join the conversation!