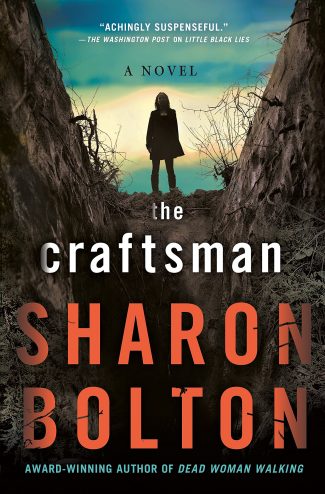 Sharon Bolton returns with her creepiest standalone yet, The Craftsman, which follows a young cop trying to trace the disappearances of a small town’s teenagers.

Take a visual tour through The Craftsman with GIFnotes!

Florence Lovelady’s career was made when she convicted coffin-maker Larry Grassbrook of a series of child murders 30 years ago in a small village in Lancashire. Like something out of a nightmare, the victims were buried alive. Florence was able to solve the mystery and get a confession out of Larry before more children were murdered, and he spent the rest of his life in prison.

But now, decades later, he’s dead, and events from the past start to repeat themselves. Is someone copying the original murders? Or did she get it wrong all those years ago? When her own son goes missing under similar circumstances, the case not only gets reopened—it gets personal.

On the hottest day of the year, Larry Glassbrook has come home to his native Lancashire for the last time, and the townsfolk have turned out to say goodbye.

Not in a friendly way.

It might be just fancy on my part but the crowd outside the church seems to have grown during the brief, chill funeral service, swelling the numbers that arrived early to claim a good spot, the way people do before a big parade.

Everywhere I look, people stand among headstones, flank the perimeter wall and line the footpaths like some ghastly guard of honour. As we follow the coffin out into sunshine bright enough to cauterise wounds, they watch us, without moving or speaking.

The press are here in force, in spite of the date being kept secret for as long as possible. Uniformed police hold them back, keeping the paths and the porch clear, but the photographers have brought stepladders and huge telescopic lenses. The rounded, fluffy microphones of the news presenters look powerful enough to pick up the scampering of church mice.

I keep my eyes down, push my sunglasses a little higher on my nose, although I know I look very different now. Thirty years is a long time.

A few yards ahead of me, beads of moisture swell and burst on the necks of the pallbearers. These men leave a trail behind them, a smell of aftershave and beer-infused sweat, of suits that aren’t dry-cleaned quite often enough.

Standards have slipped since Larry’s day. The men who worked for Glassbrook & Greenwood Funeral Directors wore suits as black as newly mined coal. Their shoes and hair gleamed, and they shaved so close as to leave raw, rash-scarred skin behind. Larry’s men carried the caskets reverently, like the works of art they were. Larry would never have permitted the cheap laminate coffin I can see in front of me.

Knowing that his own funeral fell short of the standards he’d insisted upon could have been a bitter disappointment to Larry. On the other hand, he might have laughed, loudly and cruelly, the way he did sometimes, when you least expected it, when it was most unnerving. And then he might have run his fingers through his black hair, winked suggestively and resumed dancing to the Elvis Presley tracks that seemed constantly to be playing in his workshop.

After all this time, even thinking about Elvis Presley’s music sets my heart racing.

The cheap coffin and its bearers turn like a giant crawling insect and leave the path. As we head south towards the Glassbrook family plot, the heat on our faces is as intense and searching as limelight in a down-at-heel musical hall. In Lancashire, this high on the moors, hot days are scarce, but the sun today seems determined to give Larry a foretaste of the temperatures waiting for him in his next place of confinement.

As his last minutes above ground tick away, the crowd seems to press forward and hang back simultaneously, like a confused tide that can’t quite remember whether it is ebbing or flowing.

Then, out of the corner of my eye, half hidden behind the rim of my sunglasses, I spot the teenagers. A boy and two girls, small, skinny, dressed in garishly coloured polyester. The eyes of the adults flick around the churchyard, resentfully at the mourners, nervously at the police, curiously at the media. The teenagers watch only the chief mourner, the woman who walks immediately behind the vicar, directly in front of me.

She’s beautiful in a way that no one would have predicted when she was fifteen. Her hair has become honey-blonde, and her body has filled out. No longer does she resemble a carnival puppet, its head too big for its spindly stick body. Eyes that used to stare like those of a startled bushbaby from a TV wildlife programme are now the right size for her face. The black dress she wears has the crisp texture and clarity of colour of a brand-new purchase.

A muttered whisper suggests the watchers are following. The woman in the new black dress turns her head. I can’t help but copy her and see that the three teenagers are coming too.

At the sight of them, the wound on my left hand begins to hurt. I tuck it into my right armpit, using my upper arm to bring gentle pressure against the pain. It helps, a bit, but I can feel sweat trickling down between my shoulder blades. The vicar is no more relaxed than I am. His handkerchief is out, rubbing the back of his neck and dabbing at his forehead, but he begins the burial prayers with the air of a man who knows the end is in sight. At the appointed time, the pallbearers lessen the tension on the ropes they hold and the coffin wobbles lower until we no longer see it.

That’s when it hits us. I see my own thought reflected in the eyes of those around me, and a whisper of troubled energy ripples through the crowd.

‘Better than you deserve, you bastard,’ calls a voice from the back.

This is exactly what Larry did to his young victims. He lowered them into the ground. Only they weren’t dead.

One of the teenagers, the youngest, has wandered away from his friends and is half hiding behind a headstone. He peers out at me with a sly curiosity. Stephen, the name comes to me quickly. The skinny kid in the blue shirt is Stephen.

A slick, sweating pallbearer is offering me earth and so I take a handful and approach the grave. There are no flowers on the coffin lid, nor were there any in church. I don’t remember ever seeing a church without them before and I have a sudden vision of the women of the parish coming solemnly and silently into the building last night to remove them, because this is not an occasion for flowers.

Close to the church wall, barely visible behind the crowd, is the man who was the sexton in the old days. He is dressed in a black suit now. He doesn’t look up, and I don’t think my old friend has seen me.

I let the earth fall, conscious that, behind me, it is being offered to the other mourners, who are politely shaking their heads. Taking it was the wrong thing to do, then. The thing that has made me stand out. Again.

The prayers are complete. ‘Judge not,’ ad-libs the vicar, suddenly brave, ‘that ye be not judged.’ He bows to no one in particular and scurries off.

The pallbearers fade into the background. I step back too and the woman with honey-blonde hair is alone at the grave.

Not for long. The watchers are egging each other on to become participants. Slowly the mass creeps forward. The teenagers, too, are drawing closer, although they are harder to see than the adults in the bright sunshine.

The watchers come to a standstill. The woman in black looks at them directly, but none will meet her eyes. Then a woman of sixty-something steps forward, until her sandalled feet, toenails grimy with dust, stand on the very edge of the grave. I know this woman. Years ago, she confronted me, when misery and anger got the better of all her decent instincts. I remember her fat finger jabbing at my face, the bitterness of her breath as she leaned in and stabbed me with her threats and accusations. Her name is Duxbury; she is the mother of Larry’s first victim, Susan.

Standing on the edge of Larry’s grave, she sucks in breath, leans forward and spits. It is possibly the first time in her life that she has done so. The spittle is thin, dribbling. If it makes a sound as it hits the wood, I don’t hear it. The next to approach the grave is more practised. A huge, bull-necked, bald-headed man, probably younger than the creases in his skin suggest. He hawks and then phlegm, solid as congealing paint, smacks onto the coffin. One by one the others follow, until the coffin beneath them must be spattered with spittle flowers.

The last of them to approach the graveside is an elderly man, thin and dark-skinned, eyes like stones. He looks round.

‘Nowt personal, lass,’ he says to the woman in the black dress, as I try to imagine anything more personal than spitting on a grave. ‘We never blamed you.’ Bow-legged, arthritic, he moves away.

For a minute, maybe more, the woman in the black dress is motionless, staring at something in the middle distance. Then, without looking back, she crosses the grass towards the path, perhaps bracing herself to run the gauntlet of reporters and photographers. They have kept their distance during the service, but they didn’t come here for nothing and they won’t leave without something.

I follow in her wake, but a sound grabs my attention and I stop. Behind me, at the graveside, I hear the teenagers making high-pitched, sucking noises as they try to copy the adults and spit on Larry’s coffin. I suppose they have more excuse than most, but what they are doing seems feeble, and beneath them. I think I might speak to them, tell them it must surely be time to move on, but when I look back, they are nowhere to be seen. Those three kids haven’t walked the earth in thirty years and yet I can’t help but feel that the woman in the black dress has seen their ghosts too.