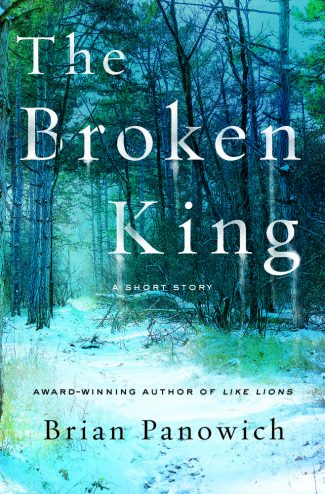 Before Like Lions publishes on April 30th, enter the world of Brian Panowich, where Gareth Burroughs runs McFalls County, in North Georgia, and all the criminal enterprises therein. Two of his three sons, Halford and Buckley, are aiming to follow in his footsteps. The third, Clayton, has turned his back on the family and become a lawman, a sheriff in town. In Bull Mountain, the brothers’ inevitable confrontation will change life in the county forever. In Like Lions, the last man standing, Clayton, must finally reckon with his heritage, and with the expectations of everyone left in his father’s and brothers’ organization. But before Bull Mountain, before Like Lions, there was “The Broken King,” and a final confrontation on a very cold night.

Gareth Burroughs died by fire during an ice storm.

The irony of that was not lost on the men who found his body, or on most of the folks who knew him. He’d been a saint to some, a firm hand and a loyal provider for the people of Bull Mountain, but for others, he was a ruthless son of a bitch. An entitled tyrant who governed over those very people with a sadistic anger he’d inherited from his father. It was a well-seasoned anger that passed down through all the Burroughs men who came before him until it was as black and as hardened as cast iron. The Burroughs family had been running Bull Mountain since before the place had a name, and for the last four decades, Gareth had been sitting at the top of the food chain as the man in charge of the dope trade in North Georgia. No one questioned that, and anyone who did found himself dumped in a freshly dug hole, covered in moist dirt, marked by nothing but a scattering of pine straw and oak leaves.

Of course, no king lives forever, and Gareth was getting old.

He was familiar with the stink of it. He smelled it on his own father before he picked up the torch, and knew that up here on the mountain, getting older wasn’t kin to getting wiser. It meant getting weaker, and the savages he already struggled to maintain were beginning to catch a whiff of that stench coming off of him.

During the coldest winter in McFalls County’s recorded history, a North Atlantic cold front swept down the east coast dragging the region and its ill-prepared inhabitants through a brutal solstice. Even the survivalists and life-long mountain folk of the Georgia foothills who made their homes in the highest altitudes of the state struggled to keep their freezers stocked with game and their woodpiles filled. The stories of hunters being found frozen in place while out tracking something—anything—to feed their kin were rampant. The bitter winter assault barely lasted a week at its peak, but it was long enough for the hard frosts to turn red clay to blue steel and put an unshakable chill in the bones of every man, woman and child on that rock. The storm encased everything across the Blue Ridge foothills in ice. Every tree limb, rock, and vine of kudzu, every leaf, weed, tractor, truck, or rusted out engine part had been frozen in place as if time had just stopped. The entire mountain would shimmer in the last morning’s sunlight like some kind of ancient palace constructed of spun glass. The storm’s effects would even have been considered beautiful to a man like Burroughs, but by the time the people of McFalls County got to recover from the damage done and take in the scene, Gareth would already be dead. He’d met his demise on that first night—long before anything beautiful had been left behind to see. Not that it would’ve mattered. Gareth had forgotten all about beauty, or what it even meant for something to be beautiful. Beauty was another day above ground, and now even that had been stripped away.

When the storm first arrived and began to blacken the skies of Northern Georgia, the winds had already wreaked havoc on a large portion of the marijuana crops twisting in strategic braids across the northern face of the mountain, and that loss would cost the family, along with everyone that depended on the cash flow, thousands. That was a problem. Money was an issue these days. Gareth’s new game, amphetamine production, brought to the table by his eldest sons as the next big market to move the family into, was just getting off the ground. Any excess funds they might have had to make up for the hit to the crops were now tied up in a barn-full of chemicals, vats, and space-age machines they’d just secured from the Englishman down in Florida. Gareth had let his boys talk him into it, and now everyone who depended on him was going to pay for his listening. The boys used phrases on him like Playing the long game and Looking toward the future. Gareth scoffed at that kind of talk. He recognized those terms for what they were, thinly veiled ways of convincing him to become more dependent on outside interests. Ernest and Jimbo had said the same kinds of things about bringing in Mexican Cocaine in the eighties. They said there was a fortune to be made. That may have been true, but Gareth was right to say no then and the same stood true now. But it wasn’t his shot to call, not anymore. Gareth had been losing control of those decisions whether he liked it or not. Like so many old men before him, he was just another son who’d become his father, while his own sons became men. Gareth was feeling what his father, Cooper, must have felt as he watched Gareth march the family into unfamiliar territory with the Englishman over twenty years ago. It was funny how that worked. The history on this mountain could be as invisible and cruel as a sniper in a red oak. One minute your finger is still on the trigger, and the next, you’re the one in the sights.