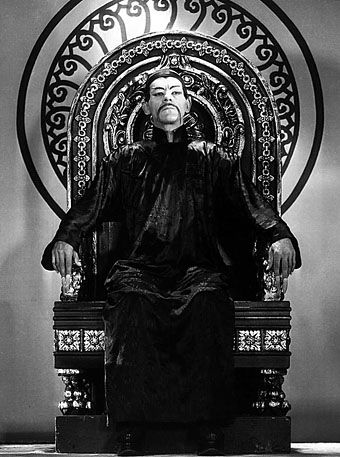 or the End of a Perfectly Good Moustache

The adventures of Sherlock Holmes, as they were genuine adventures, were always embellished with flourishes of the exotic.  Doyle knew his audience, and Britishers who had never so much as set foot outside their own nation thrilled to accounts speckled with not merely Indian swamp adders (which do not exist) but pint-sized, blowdart-wielding, cannibalistic, “naturally hideous” Andaman Islanders (who do not exist either) and “rascally Lascars” (who may possibly exist, but surely would fail to appreciate the description).  As stories, they are products of an empire-building nation preoccupied with tales of faraway lands.  I wonder, though, when presented with the second episode of BBC's rightly lauded series Sherlock, entitled “The Blind Banker,” whether we need quite such a dose of the same aesthetic these days, within the context of modern adaptations.  I strongly suspect we don't. “The Blind Banker” begins with a theme that never fails to tickle Sherlockian purists: the My Roommate Would Never Be Tolerated by Just Your Average Joe from Craigslist motif.  And Martin Freeman's John Watson is a man of admirable patience.  Within minutes, it's clear that Sherlock has probably never purchased his own groceries in his entire adult life, that it is easier for him to hack into his flat mate's computer than to cross the room to fetch his own, and that money is only ever a theoretical construct, rather than a commodity to be earned by means of a mysterious practice called a “job.”  By the end of the episode, he has also gate-crashed—and quite predictably ruined—the only romantic interlude John has managed to come by since moving into Baker Street, presumably.  I don't claim to have met the Sherlock Holmes of Doyle's original canon, but I've read a very great deal about the lad, and it all rings perfectly true.  This is the man who remits his own consulting fee whenever it suits him, who gets into the dumps and won't speak a word for days on end, and who allows criminal relics of unknown origin to turn up in butter dish—or, as Watson darkly hints, even less desirable places.  And the chemistry between the Impossible Supergenius/Socially Inept Flatmate and the Entirely Normal Bloke clicks along between Cumberbatch and Freeman like a house aflame.  “We're going out tonight,” Sherlock announces.  “I need some air.”  John declines, as he has a date, and then finds it necessary to explain that a date is where two people who like each other go out and have fun.  “But that was what I was suggesting,” the detective returns.  “No,” says John, “it wasn't.”

The case itself is purported to be very loosely based on “The Adventure of the Dancing Men,” a thrilling little number in which a series of mysterious hieroglyphs drives a newly wedded woman out of her head with fright, and her concerned husband engages Holmes to discover what they mean.  But “The Blind Banker,” with its series of threatening Suzhou numerals presaging multiple murders, owes a far greater debt to the opening chapter of The Valley of Fear, in which a cipher requires that both the sender and the recipient own the identical reference book.  London A to Z proves to be the code-breaking title, after Sherlock and John have been led a merry chase through Chinatown, the halls of high finance, and a very entertaining interlude with a street artist whose graffiti seems a deliberate homage to Banksy.

Which is all well and good, until we come to the villains of the piece. It is perhaps worth mentioning here that “The Blind Banker” is the only episode thus far not written by one of the co-creators.  That being said, and for all its good clean fun, there are problems here you don't have to be an expert in Chinese culture to pick up on.  I can buy that the damsel in distress, Soo Lin Yao, is a Chinese antiquities expert who is expertly versed in the art of the tea ceremony,  which set-piece opens the episode (the closest match I can find to what she's doing being the Gōngfu Chá Dào tea brewing tradition, though I am admittedly ignorant of things tea-related).  Fine.  I can buy that she was once involved in a smuggling ring called a tong, though most Chinese tongs have about as much in common with rampant gang criminality as Jewish community centers do, or Boy Scout fundraisers, or Rotary Club benefits.  But let's give them a freebie on use of the word “tong,” what the hell.  However, when the dastardly ninja menace turns out to be a circus performer in a gang of evil Chinese acrobats, presided over by a foul femme fatale spouting orientalist threats when she's not in three or four inches of pseudo-traditional operatic theatrical paint—then I begin to feel as if there are sharks in the water.  Many, many sharks.  And that I am airborne.  Jumping them.

The original Sherlock Holmes stories often subverted the established class paradigms: Holmes was always extravagantly disinterested in whether the given client's blood was blue, for instance, and “The Yellow Face,” while in some ways plot-problematic, is a nicely clear argument against racism.  But I wish “The Blind Banker” hadn't ruthlessly slain its too-sexy-to-be-allowed-to-live protagonist, and that the heir apparent to Fu Manchu hadn't been responsible, nor the character's own brother.  As tvtropes.com so aptly notes, Fu Manchu “probably bears direct responsibility for killing off an entire facial moustache style among the East Asian peoples of the world, a feat only matched by Adolf Hitler (who killed off his particular style among just about everyone).”  If this is how he is to be remembered, then let Fu Manchu be just that.  A memory.  There are some themes that simply don't bear revisiting.

Lyndsay Faye, author of Dust and Shadow and The Gods of Gotham, coming Winter 2012 from Amy Einhorn Books/Putnam. She tweets @LyndsayFaye.