Heists are a staple of the crime genre. Who doesn’t love stories like Ocean’s 11, The Italian Job, or even A Fish Called Wanda? But, unlike murder and other crimes, heists are crimes we can get behind. We actually cheer on the criminals in their attempt to rob people. But why is that? Why can we get behind a group of people out to steal, yet condemn the mugger?

Heists are always against someone big and oppressive. Either some kind of large corporation or viciously wealthy individual is the target. We dislike the big bad corporations and the viciously wealthy because, well, they’re not us and their character is shown to be flawed in some way, much as Andy Garcia’s character in Ocean’s Eleven. He’s powerful, shows himself to be a jerk, and has very little sense of humor. This last reason is enough to justify robbing him.

There’s also the challenge. Heists are always conceived as impossible jobs. The security is so overwhelming and interconnected that even contemplating the heist calls one’s sanity into question. The crew on the heist—and, by definition, a heist must have a crew—is always a motley bunch with varied skills. Each one has a different criminal specialty that is necessary to get the job done. Invariably there is a safecracker, a pickpocket, a computer specialist, and a wheelman, among others. Part of the fun is watching this motley band, who usually have little association with each other prior to the story, come together to exact social justice on the wealthy and oppressive.

These are the underdogs, and we love them. Heist crews are reminiscent of a group of individuals coming together to undertake a quest as in a fantasy series such as Tolkien’s Lord of the Rings. Tolkien’s Hobbit is a fantasy heist. Each dwarf has his own specialty area, but they need Bilbo to fill in the last gap. Why else would they need a sneaky little hobbit for the job?

Heist crews have no chance individually; even together their chances still aren’t great, but teamwork can see them through. When they’re able to get along, at least, which is part of the fun. Who doesn’t want to see the explosives expert argue with the safecracker about the best way to get the job done? Watching the wheelman ask the hacker for help—a la The Italian Job—in getting through the city’s traffic lights is also quite fun.

Heists are clever. Brute force cannot get the job done. Not only would the impressive security slow them down, police and other agencies would come in to stop it all. Heist crews need to be smarter. Their disparate nature turned from liability into asset, which brings me to my favorite idea regarding heists.

Heists are the Rube Goldberg machines of the criminal world. You’ve all seen them. Those funny little machines patched together out of whatever’s around all to do something technically simple, such as flipping on a light, but it takes various gizmos triggering off other gizmos along a continuous chain before the light is finally turned on. Rube Goldberg machines are overly complicated, made of incongruous parts, and look as if they’re ready to fall apart at any time. Yet when each element triggers off, it becomes a kind of ballet.

Heists are the same way. The next part of the plan relies on the specialist before completing her part of the plan. If at any point a specialist does not complete her objective, the whole thing fails instantly and spectacularly. And while heists appear overly complicated, they get the impossible job done.

So get into a good heist story. Watch that intricate, disparate Rube Goldberg machine get the job done where nothing else could. 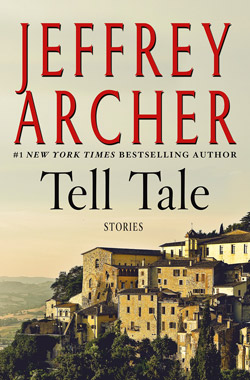 Nearly a decade after his last volume of short stories was published, Jeffrey Archer returns with his eagerly-awaited, brand-new collection Tell Tale, giving us a fascinating, exciting and sometimes poignant insight into the people he has met, the stories he has come across and the countries he has visited during the past ten years. Find…

Every Wednesday, we here at Criminal Element will put together a list of Staff Picks of the books that published the day before—sharing the ones that we are looking forward to reading the most! This week, we get the final volume of Jeffrey Archer's Clifton Chronicles and a new Jack Reacher novel! See what else… Q&A with Allen Eskens, Author of The Heavens May Fall

Allen Eskens is a criminal defense attorney and the author of The Heavens May Fall. (Available today!) With a schedule like that, it seems like it'd be hard to do anything else, but Allen kindly took the time to answer some of CrimeHQ's questions about juggling the two professions, what he's currently reading, and what's next…