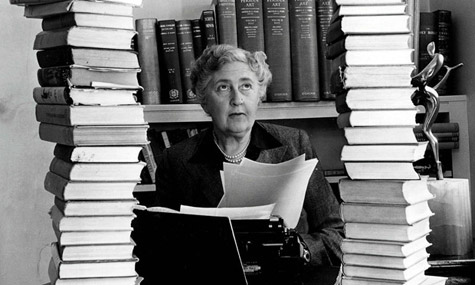 Here’s how it commenced: One night when I was twelve, maybe thirteen, I caught the film Ten Little Indians on TV. It was the 1965 version, not the best (see 1945’s Then There were None) but compelling all the same. The set-up and execution (literally!) really grabbed me: Take ten strangers, strand them in an isolated mansion, and toss in some shadowy past sins, a slew of quirky murders, and an embedded killer, and what have you got? The beginning of a Christie reader. Not long after that evening, I learned that the person who’d dreamed up that dastardly little soiree was a rather renowned Englishwoman, well-born and cultured, who’d been responsible for scores of cold-blooded murders. That week I invested in my first Agatha Christie novel. It was a Dell paperback called Murder After Hours (aka The Hollow.) The cover art reminded me of the Golden Book Encyclopedia covers: a collection of seemingly random objects arranged in still-life. Here, scattered upon a window ledge, were a glowing flashlight, a crumpled note, a teacup and a revolver. Just outside the cracked windowpane, a large owl—shorthand for all things mysterious—sat on a bare black branch and stared forward menacingly. Good stuff.

That was the first of many Christies for me. Over the next five years, I racked up about forty of her books—and always in paperback. Occasionally, a hardcover might find its way into our house, but I’d always eschew it for the softcover version. Back then, there were three different publishers offering Dame Agatha’s mysteries: Dell, Bantam, and Pocket Books, each with its own house style. I remember every cover. My most memorable acquisition came one Christmas when I found a stack of five spanking-new Christie paperbacks under the tree (from Santa Mom). It was the perfect gift for that period of my life. Agatha Christie died, at age eighty-five, on January 12, 1976. That was also my 20th birthday, the day I left my teen years behind. There seems to be something fitting in that, maybe a little poignant. After all, that old Englishwoman had been the main author I’d read as a teenager. Now she was gone, and I was a man—or at least one in training. There were still numerous novels and short story collections of hers I hadn’t yet gotten to, but I was ready to move on. To other authors, other interests. For many, many years, I didn’t pick up another Christie.

Whatever happened to all those paperbacks I’d amassed? In the mid-nineties, after my mother passed away, my father sold the house. I helped him clear it out, but the Christies never surfaced. Who knows what becomes of the relics of youth? Now, decades down the line, I’ve come full circle. I started reading her again perhaps twenty years ago. Come to think of it, probably around the time Mom died. I usually read three or four Christie mysteries a year—the ones I never got to and those where I don’t remember who done it. (I still can tell you who the killer is for certain of her books I’d read back in the 60s and 70s.) I’ll admit sometimes she annoys me—there’s stereotyping, some far-fetched plot twists, and—for my taste—way too many instantaneous romances. You know, such as “Darling, I just met you three days ago, but now that this wretched murder business is all tidied away, dearest, oh, do say you’ll make me the happiest bloke and marry me at once!” Hey, slow down, champ, and write up a pre-nup agreement or two.

Those moments aside, I still enjoy and appreciate the books, and draw inspiration from them in writing my own novels. As a mystery author, I definitely see Agatha Christie as a literary godmother of sorts. All her trademarks—the gathering of suspects, the detective’s soliloquy, the cornering of the (hopefully) least likely suspect—all have I embraced warmly. If I’d been told at fifteen or sixteen, sprawled on the couch reading Poirot Loses a Client, that one day I’d have my own whodunits in bookstores, well, I’d have been floored.

These days, I don’t just possess her books, I collect them. Or, perhaps more accurately, I re-gather them. While there are, of course, a throng of Christie editions out in the world, I always find myself seeking those paperbacks that I read as a teen-ager. Just as the songs of your early years are always, in a way, the best songs, so it is with my Christies. Though my original copies are lost in time, I’ve managed to acquire versions of them—like I said, I remember every cover. I’ve gleaned them from used book stores, from online, and—in one case—from the basement of my wife’s deceased uncle. Actually, right after the funeral, if you must know. Lest you think me tacky and ghoulish, I knew that his daughter would be selling the house and was looking to clear things out. After hearing of my enthusiasm for those books, she was more than happy to pass them on to someone who’d appreciate them.

As mentioned, each publisher had its own cover style. Dell favored the still-lifes—always with some unsettling element: a knife, a bludgeon, a bottle of poison. Bantam also used a mixed object motif, but with a smaller picture framed in white; I always preferred the Dells. Pocket Books went for large blocks of primary colors framing a single foreboding image, such as a stabbed jack-o-lantern or a grandfather’s clock with a skeleton face. In the ‘70s they switched to full painted covers, more artistic perhaps, but less pleasingly pulpy. If I didn’t have such an emotional attachment to the ‘60s paperbacks, I might be drawn to collect the cool ‘40s Christies that Dell and Pocket Books put out. Compact and garish, some of them had those nifty period maps on the back cover. But I’m no fickle admirer—I’ll stick with collecting those paperbacks I cut my teeth on. After all, you gots to dance with them what brung ya.

Michael Nethercott is a playwright and writer of traditional mysteries whose O’Nelligan and Plunkett tales appear periodically in Alfred Hitchcock’s Mystery Magazine. His first novel features this 1950s detective duo, The Séance Society.